The former head of Treasury and the Department of Prime Minister and Cabinet said Australia should not simplify the debate about the geo-strategic situation in the region, saying it was not a “choice” between the United States and China. 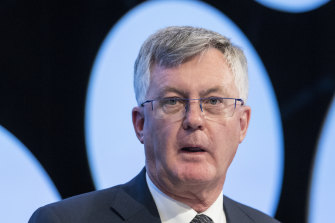 Speaking at the Association of Superannuation Funds of Australia annual conference on Wednesday, Mr Parkinson said to simplify the debate on China as a choice was “actually really dangerous”.

“The question is not whether we choose, it’s how we balance. And I think for Australia, we need to get a lot more sophisticated.”

Mr Parkinson’s comments come after Australia’s former top diplomat, Philip Flood, said the government needed to approach China with “more nuance” and be wary of being drawn into a United States policy of confrontation with Beijing.

Mr Parkinson, who headed DPM&C until 2019, said the election of new President Joe Biden would make it even more difficult for Australia to manage its relationship with Beijing because the US had maintained open channels of dialogue.

He said this had put Canberra in an “uncomfortable” position.

“Other countries in our region have managed to have differences of view with China but keep open channels of communication.”

While he supported the decisions taken by the government to crack down on China’s growing incursion into Australia’s domestic affairs, Mr Parkinson said they needed to be better communicated.

He highlighted calls by Prime Minister Scott Morrison to give the World Health Organisation the same powers as weapons inspectors to forcibly enter a country to avoid a repeat of the COVID-19 global pandemic.

“What whizz kid who dreamed up those talking points, what did they think they were going to achieve with that?”

China last year imposed more than $20 billion of trade strikes on Australian exports and its senior government officials have refused to return the phone calls of Australian ministers after the Morrison government pushed for an independent inquiry into the COVID-19 pandemic.

Chinese embassy officials last year delivered a list of 14 grievances to Nine News, The Sydney Morning Herald and The Age in Canberra, and warned it was up to the Australian government to fix its policies on Huawei and the South China Sea, turn off funding for the Australian Strategic Policy Institute and stop unfriendly media coverage.