When Jess Abrahams was a boy he used to see koalas on his grandfather’s farm in the Yarra Valley on Melbourne’s fringe. About 10 years ago the koala was first listed as vulnerable. Today, it is listed as endangered in much of the country under the federal government’s key environmental protection law, the EPBC Act. 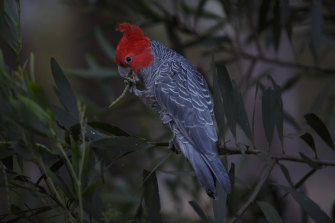 The gang-gang cockatoo has joined the ranks of Australian endangered species.Credit:Museum Victoria

The gang-gang cockatoo leapt onto the list as endangered, skipping the vulnerable status entirely.

“Since I was a young man so many large, common, charismatic animals have slipped onto these lists, and once they are there it is normally a death knell,” says Abrahams, now 48.

The new State of the Environment report has proved to be shocking reading, even for those like Abrahams who knew what to expect in it. It is further evidence that as a society Australia is more willing to catalogue the destruction of what is left of its natural heritage than it is to preserve it.

As Abrahams notes, the indicators in the 278-page overview released on Monday by the federal government are all either negative or at best stable.

Since the last report was published in 2016, the number of threatened species listed under the EPBC Act has risen for almost all taxonomic groups by an average of 8 per cent. This means, for example, that 22 per cent of the various species of frog found in Australia have been listed as vulnerable or threatened since 2016.

Declines of turtle populations of up to 91 per cent were observed along the Murray River.

Whole ecosystems are collapsing together, the report shows.

“The number of threatened ecological communities listed under the EPBC Act has risen by 20 per vent over the past 5 years,” it says. “As of June 2021, 88 are listed, of which 41 are Critically Endangered, 44 are Endangered and 2 are Vulnerable. Fourteen new listings have occurred since January 2016, including nine in the Critically Endangered category.”

The report describes an environment ravaged over the past five years first by drought, then by the fires exacerbated by the drought. The impacts of recent floods are too recent to be charted, but the report notes that extreme weather driven by climate change is battering Australia’s ecosystems.

One term that keeps cropping up in the report is “cumulative impact”.

In some regions, climate change has supercharged fires, adding to the toll on species already suffering from habitat destruction caused by land clearing for agriculture.

In others, forests have been logged further shrinking the habitats of endangered species, leaving them more vulnerable to introduced species, particularly the fox and cat. 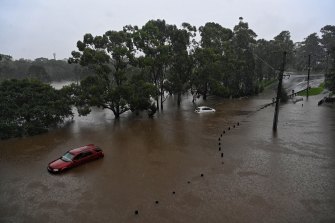 The report didn’t examine the recent floods but noted that extreme weather is battering ecosystems.Credit:Nick Moir

The Great Barrier Reef has bleached time and again, but the report notes the damage is not contained to the north. Rocky reefs stretching south from Brisbane around the containment to Perth are judged to be in “poor and deteriorating condition” (another common term in this report).

The towering underwater kelp forests of Tasmania, once home to weedy sea dragons, rock lobsters and abalone, have been lost over recent years, eaten by long-spined urchins that have thrived in warming waters.

The other most common theme in the report, the fourth published over the lifetime of the EPBC Act, is the failure of Australian governments to act on the increasingly dire warnings contained within them.

The key distinction between the overview to this report and its predecessors, is that the destruction appears to be gathering pace.

“The act has loopholes you could drive a logging truck through,” says Kelly O’Shanassy, the CEO of the Australian Conservation Foundation (ACF).

The report notes that of the 7.7 million hectares of land habitat cleared between 2000 and 2017, 7.1 million hectares, or 93 per cent, was not referred to the federal government for assessment under the act, while only four of 3058 referred actions to remove land habitat have been deemed “clearly unacceptable”.

An earlier ACF report shows that over the past 10 years federal environment ministers have approved the clearing of 200,000 hectares of threatened species habitat for coal mines, roads or urban sprawl.

It is no surprise, says O’Shanassy, that Australia’s growing ranks of endangered or extinct species have lost their habitat to agriculture or industry.

The key distinction between the overview to this report and its predecessors, is that the destruction appears to be gathering pace.

If there is good news to be found here, she says, it is now that the evidence is in for the Australian public that the extinction crisis we face is as dire as the climate threat.

A guide to the environment, what’s happening to it, what’s being done about it and what it means for the future. Sign up to our fortnightly Environment newsletter here.