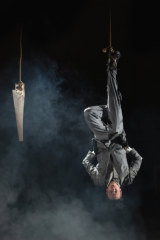 Mitch Jones’ one-man show clowns its way to a dystopian future through an unnerving merger of circus, performance art and physical theatre. If holding the stage alone for a wordless 50 minutes is a tall order, there’s a sense in which AutoCannibal is not a solo work at all – for, as Angela Carter points out, “despair is the constant companion of the clown”.

The piece swirls into a vortex of self-destructiveness. It starts with a brief, black-comic voice-over which casts us into a world where environmental, social and moral breakdown have left humanity on the brink of starvation. In a grotesque reductio ad absurdum, people have started chopping off body parts and selling them.

That prospect coalesces in a startling image: Jones is suspended mid-air, hanging upside-down from a rope which he cuts with a rusty handsaw before plummeting into darkness.

A thread of desperate circus is woven throughout. One vigorous horizontal bungee routine works up enough sweat for the performer to squeeze his own bandanna into a jar and drink the contents. 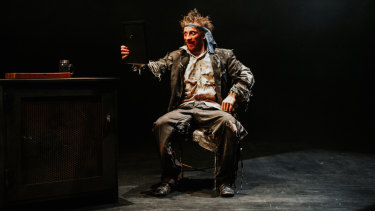 There are strange sights closer to performance art, where the truth of the body is desperately deformed by the built environment. All manner of frantic, futile clowning starts to emerge from the trashpile of insatiable desire.

The character might “eat” a disposable plastic bag, then read the news, incomprehensibly, with his mouth full. He might dive through garbage for food and, finding none, copulate with it. Even when this desperado does find a morsel of food, the energy gained from it soon dissipates in wild cavorting to celebrate, leaving him hungrier than ever. 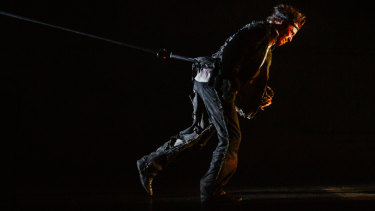 Director Masha Terentieva crafts a lean and hungry show – no mean feat – though the confidence and precision of Jones’ physical theatre, and the development of character in the clowning, could use more craft and depth.

Even so, AutoCannibal is an imaginative hybrid performance, crawling with dark and scintillating ideas.