With rules meaning there is no group training, no going further than five kilometres from home, exercise limited to an hour and no races to attend, running coaches like Sean Helmot are drastically overhauling training programs. 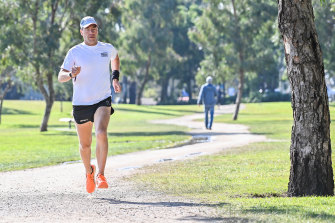 "Stage four is a bit of a game-changer for us," Mr Helmot said.

"The practical impacts are unless you’ve got a treadmill, then any marathon or half-marathon training is put on ice. And you’ve got to be a pretty die-hard athlete to sit on a treadmill for two hours plus."

The coronavirus has already upturned big annual races around the globe. The Boston, New York and Berlin marathons were cancelled this year, while others have been postponed or moved online.

The London Marathon, initially planned for April, will now take place next month as an "elite only" crowd free event, while Sydney’s iconic City2Surf will go ahead as a virtual, suburb-based race on October 18.

The Melbourne Marathon was due to be held this October, but is now reviewing its plans to possibly postpone the run to a later date or 2021.

Past marathon runner Donna Lancaster couldn’t understand how the event could go ahead as scheduled given the disruption to training.

"A marathon takes at least two hours to do, so if people are running for an hour and think they can train for it, they will be under-trained if they are doing it as a virtual run," she said.

Mr Helmot said the cancelled events were disheartening but it was the restrictions on movement that were particularly jarring for athletes’ mental health.

"Running itself is fundamentally a celebration of freedom," Mr Helmot said.

"And in many cases it’s also a healthy means of escape. Everyone’s running for different reasons, but for many people, that’s their meditation. So when limitations get put on you, it would most certainly have a negative mental impact on most distance runners."

Mr Helmot has pivoted his clients to sit within the latest rules, which often meant virtual time trials in place of long distance hauls.

"We’ve had to be creative. While it might not be as sexy as saying I completed a marathon, one-on-one running is starting from small and working your way up," Mr Helmot said.

Annette Ladlow was training for the Queenstown Marathon later this year and found the new restrictions challenging.

"As a creature of habit, you’ve got your really great places to run that are good for your head-space, and when you’ve got to make do [with the new rules] it’s harder with motivation," Ms Ladlow said.

Mr Helmot noticed the low morale and is putting more focus on staying connected, by planning group-based activities with his team. Each week, an athlete would pick a challenge for everyone to complete – like nutritional goals or giving up booze or social media.

"Fundamentally to me, it’s all about reminding athletes that we’re in control of our decisions and we want to keep the focus on bringing positive initiatives into our world," he said.

Mr Helmot said there was "no doubt" thousands of runners would be missing morning weekend park runs and group fitness. But he had also been heartened by social media tools like Strava, which had allowed runners to celebrate other athletes successes.

"You see people doing interesting things, like runners doing all the streets in their postcode, lots of people creating art with their running apps. And then you’ve got people discovering areas in their own neighbourhood that they weren’t actually aware of before," he said.

He reckoned for many, the second lockdown could actually wind up as a chance for rest and release.

"This should be a time for taking some pressure off yourself," he said. "For some it might actually be a relief that runners can remove themselves from hard marathon training towards a different goal. With all of this – it can be really taxing and take some energy out of you. You have to do your best to flip it into a positive."

Runner Daryl Sadgrove has eventually accepted putting marathon training on hold and embracing the limitations of his five-kilometre zone.

"I’m one of those runners who likes to run all over the place which you just can’t do as much any more," Mr Sadgrove said.

"But I’m also probably more grateful for getting out of the damn house than I ever was before. I did a 60-minute run today within the limitations, but I was buggered anyway. So it’s not ideal, but we just have to adapt and make the most of it."

Get our Coronavirus Update newsletter for the day’s crucial developments and the numbers you need to know. Sign up to The Sydney Morning Herald’s newsletter here and The Age’s here.