To begin her first Melbourne show in more than three years, Billie Eilish springs up onto the stage through a temporary hole in the stage floor. But even before the 20-year-old Californian’s arrival, the full-house Rod Laver Arena is fizzing. ABBA’s Gimme! Gimme! Gimme! plays through the PA and ignites one of the night’s biggest singalongs. 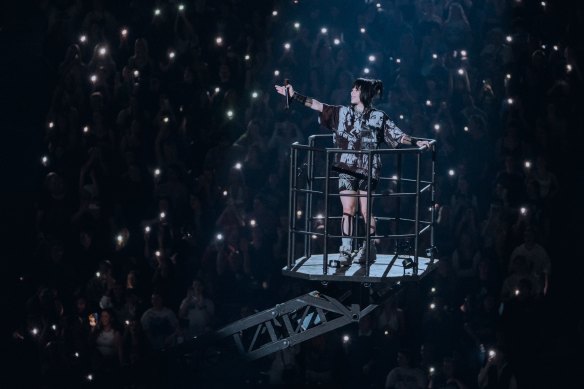 For many, this is likely to be their first gig; for the parents here accompanying teenage kids, it’s their first big pop gig of the very online era. But despite the number of phones that light up as soon as Eilish and her brother Finneas appear on stage, the atmosphere in the audience is one of intense focus and deep affection throughout the O’Connell siblings’ two-hour stay.

Eilish and Finneas are joined by drummer Andrew Marshall, who brings a material vibration to the goth-lite synthpop of opener bury a friend and subsequent songs I Didn’t Change My Number and NDA. The latter features a snare drum crack reminiscent of Nine Inch Nails’ Closer, though Eilish evades the prurience of Trent Reznor, instead using the suggestive groove to illuminate the pitfalls of mega-celebrity.

“Think I took it too far, when I sold you my heart,” she sings. “How’d it get so dark?” The set list’s next song, Therefore I Am, begins with the line, “I’m not your friend, or anything”. The sense of unease in Eilish’s lyrics is reinforced by video projections of tarantulas, sharks, snakes, and cars swerving on a dark road. 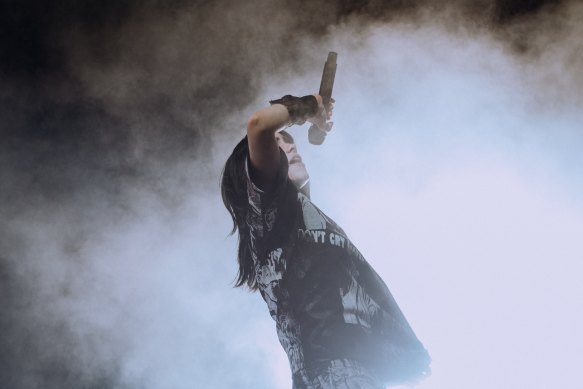 Eilish is an active performer. She is not known for her belting vocal style – quite the opposite in fact – but whenever the drums gather intensity and the subwoofers surge, she jumps and sings like an aggro nu metal front person.

There is a general absence of aggro, however.

Between songs, Eilish gives the appearance of being thrilled to be here, stopping to encourage everyone to be their freest, weirdest selves, and conducting an arena-wide quasi-aerobics session to get everyone limbered up and ready to jump along with her.

Australia is the last stop on a tour that’s visited arenas and sports stadia in close to 20 countries. The performance has the rhythm of a well-maintained machine.

When Eilish needs a free hand to clap out the drum beat in Bad Guy, a microphone stand momentarily appears in front of her. When she needs an acoustic guitar to kick off TV, one is placed in her hands at just the right time.

The meticulous staging and reliance on backing tracks does leave one craving a bit of spontaneity, a bit of danger – after all, Eilish’s songs are more than capable of stirring a feeling of subversiveness. But as a performer, Eilish is hard not to admire.