She’s supporting her man while making fans smile. Blake Lively brought cupcakes to husband Ryan Reynolds on set, and she included some references to both Gossip Girl and Sex and the City.

The pair, who married in 2012, showed off a Magnolia Bakery box on both of their Instagram Stories.

“To my Mister, who always goes BIG or goes home. I love you so much. But not as much as Peloton loves you,” Lively, 34, wrote on the package before signing the message, “Serena Bradshaw.” 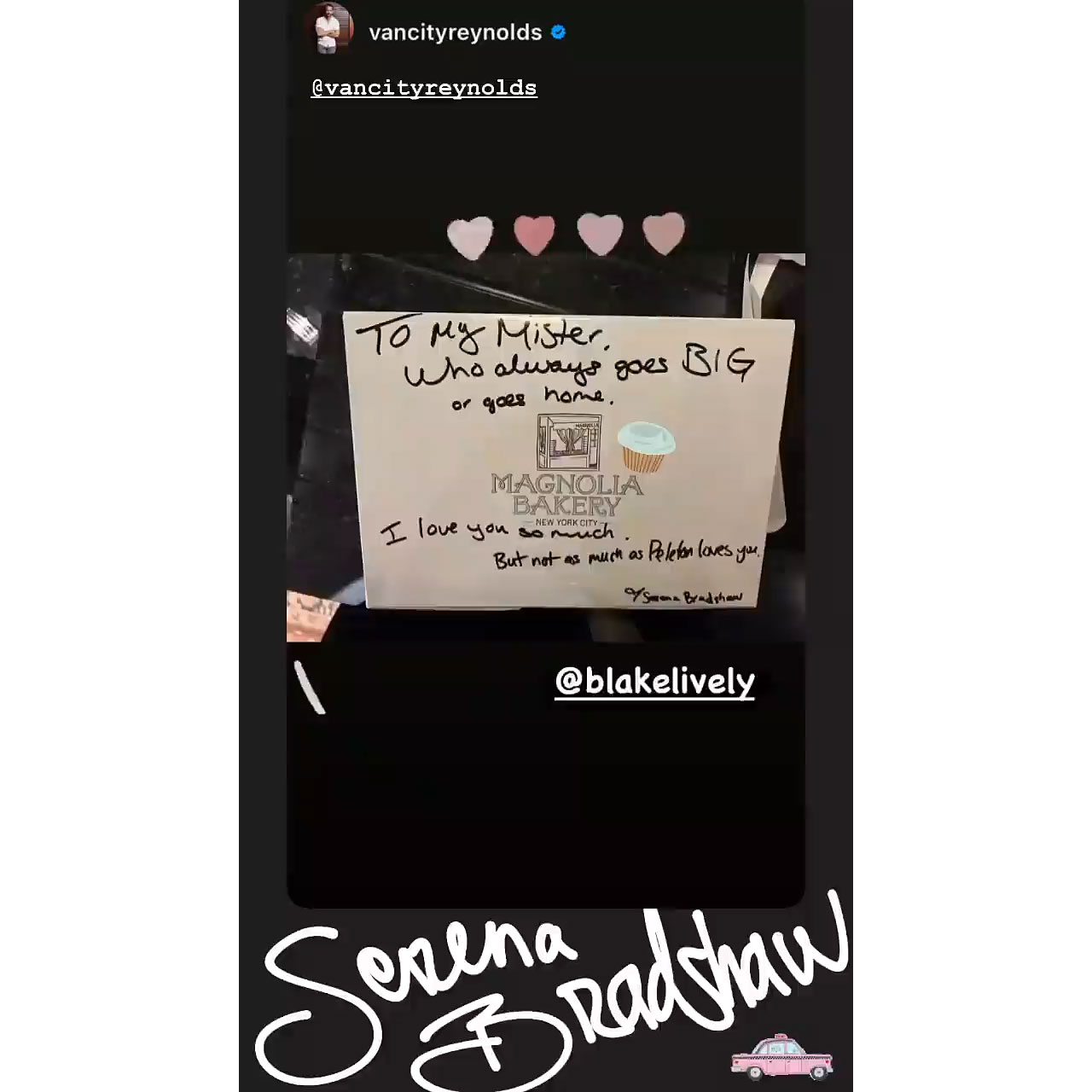 The A Simple Favor star also shared a photo of her holding the box in front of her face while standing next to the Free Guy leading man. “Yes the cupcakes were harmed in the taking of this photo,” she captioned the sweet snap. “Luckily my husband can revive anything.”

She also reposted the photo of the box to point out her “Serena Bradshaw” signature. Serena van der Woodsen was, of course, Lively’s iconic Gossip Girl character. The high school drama was widely described as “Sex and the City for the younger set” when the CW series debuted in 2007. Bradshaw, however, is a reference to SATC — which is the entire reason Reynolds, 45, was making a commercial.

Peloton was in the spotlight when HBO Max’s And Just Like That, the long-awaited Sex and the City revival, showed the beloved Big (Chris Noth) tragically suffered a heart attack after a session on his Peloton bike, and he didn’t survive. The company’s stock dropped in the aftermath of the episode’s debut on Thursday, December 9, so they scrambled to put together a new ad after releasing a statement about the safety of the bike. The Deadpool actor’s Maximum Effort company knew how to make viewers laugh. 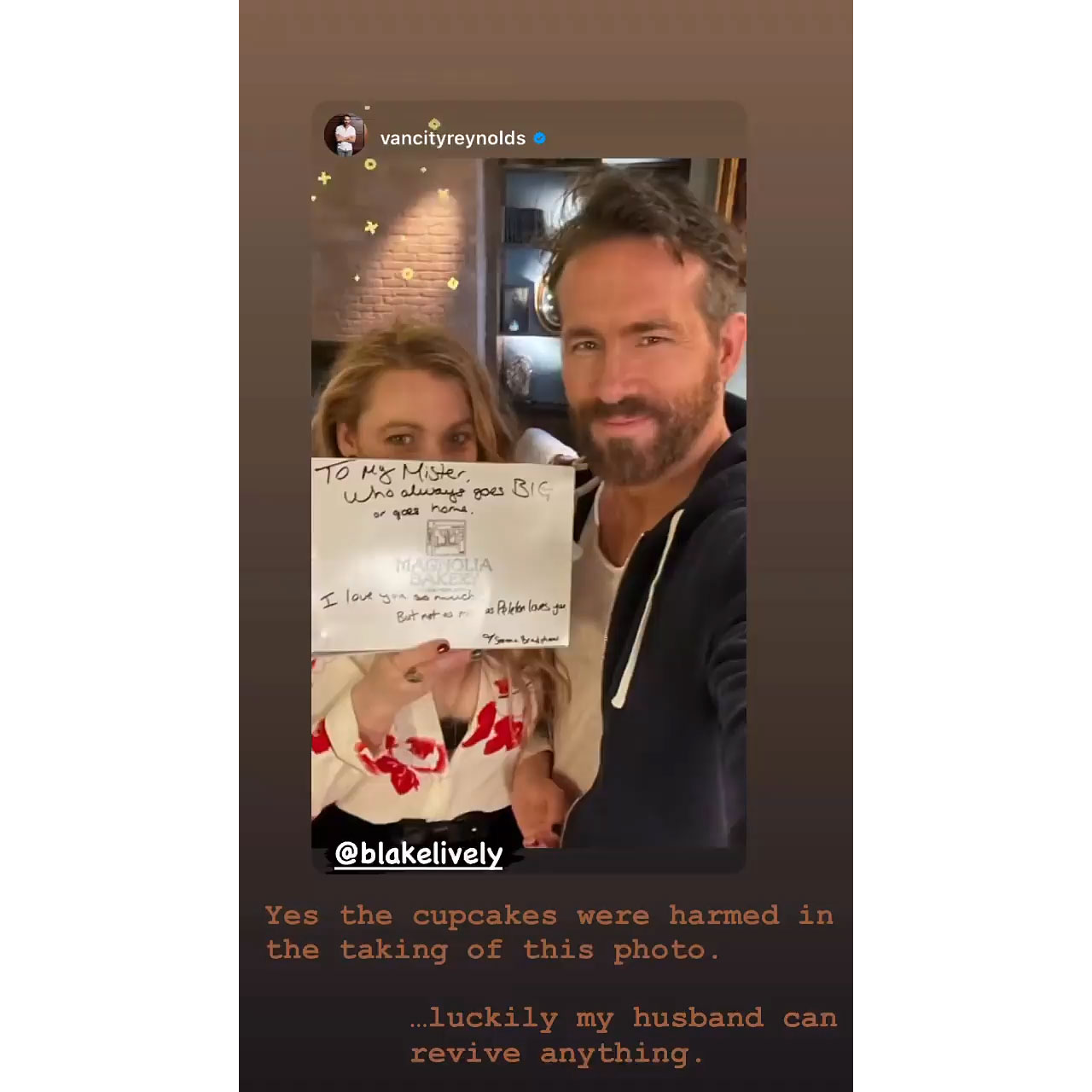 On Sunday, December 12, Reynolds’ company released a Peloton ad starring both Noth, 67, and Peloton instructor Jess King (who made a cameo as the fictional Allegra in And Just Like That). They sit in front of a roaring fireplace as they toast to new beginnings.

“Should we take another ride?” Noth asks. “Life’s too short not to.”

As they share a laugh, Reynolds’ speedy voiceover chimes in: “And just like that, the world was reminded that regular cycling stimulates and improves your heart, lungs, and circulation, reducing your risk of cardiovascular diseases. Cycling strengthens your heart muscles, lowers resting pulse and reduces blood fat levels. He’s alive.”

Lively shared the commercial via her Instagram Stories with a sticker that said, “my uterus is exploding” and a message to her husband: “@vancityreynolds, may you always dream big.”

Ryan Reynolds and Blake Lively’s Sweetest Quotes About Their Daughters

Reynolds is currently taking a little time away from acting to focus on his work with Maximum Effort. He told LinkedIn earlier this month that he’ll get to dive into his businesses — including Mint Mobile and Aviation Gin — during normal business hours, but he can be a regular parent when his kids are home. The Just Friends star and Lively share daughters James, 6, Inez, 5, and Betty, 2.

“I don’t want to miss this time with my kids. … I want my kids to have a pretty normal schedule,” he explained. “I think it’s totally important for their development, and I really enjoy being a present dad. I love taking them to school in the morning. I love picking them up. I love that I have the hours in between to focus on the things that I’m really passionate about.”