Anger, desperation and pride… Breathtaking by Rachel Clarke welcomes us to the world of the hospital doctor in a time of pandemic

Breathtaking: Inside The NHS At A Time Of Pandemic

What is it like to watch as a patient gulps for his last breath, eyes bulging at you in terror? How does it feel to be breathless yourself, stuck behind a sweaty visor that steams up so badly you fear making a life-threatening blunder?

And why does being hailed as a ‘hero’ by politicians every Thursday evening start to seem like a sick joke? Welcome to the world of the hospital doctor in a time of pandemic.

Rachel Clarke is an NHS consultant in palliative care. In normal times her work involves helping terminally ill patients leave this world as gently as possible. But in the spring of 2020, her hospice is repurposed as a ‘Covid Response Centre’ and she is tasked with caring for critically ill patients who, a mere fortnight earlier, were commuting by train and taking their grandchildren to the park.

This is the story of what happened next. 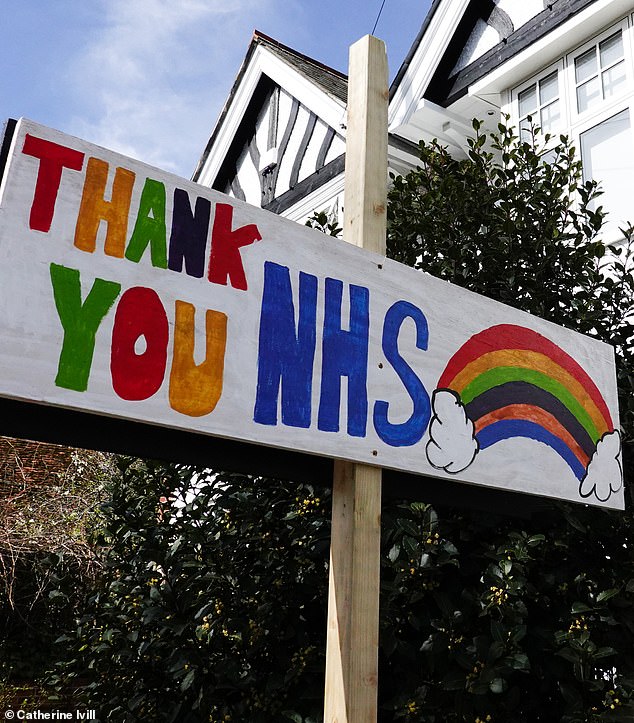 Rachel Clarke is an NHS consultant in palliative care. In normal times her work involves helping terminally ill patients (above, hand-painted sign outside a house in Aylesbury, in April)

At the beginning of the pandemic, Clarke and her colleagues watch in disbelief as the British Government sleepwalks into disaster. When colleagues in the NHS start to die – devoted nurses, skilful doctors, hard-working porters – her disbelief turns to anger.

There is a terrible moment early on when Clarke is told that the hospice has only 24 hours’ worth of paper masks left. The NHS has refused to supply any more, which means that her patients – all of whom are dying – will be sent home to manage their last painful days as best as they can.

In desperation Clarke contacts two charities that have been set up to support NHS workers and within 12 hours 1,000 masks are on their way to the hospice. It is a wonderful result, but she believes there is something profoundly wrong about having to rely on public donations to protect the most vulnerable.

Clarke finished writing this book in August, at a time when lockdown was lifted and daily deaths from Covid were down to single figures. Her mood on these final pages is sad but proud and grateful at the way in which the NHS has triumphantly come through the greatest challenge in 70 years.

What we wouldn’t give to be living in those times now.

Charles Edward Stuart’s campaign to seize the British throne on behalf of his exiled father was initially regarded in Hanoverian circles with smirking amusement. One mooted solution was to infiltrate the Jacobite camp with the working ladies of Drury Lane, and thus incapacitate the enemy with the pox.

Brutally effective victories by rebel forces at Prestonpans and Falkirk, and an incursion deep into England, soon concentrated the mind. At Culloden, on April 16, 1746, Stuart’s 5,000-strong army was finally pulverised in 40 minutes by the Duke of Cumberland’s superior might.

Men are mutilated, corpses stripped, booty looted. We meet Duncan MacKenzie, a Lochaber man-mountain, ‘six feet four inches… who cleft the head to the chin through the helmet’ of one unfortunate combatant.

If anything, the aftermath of Culloden is more brutal than the event. A grim reckoning is meted out by the King’s men. When 40 injured Scots are discovered sheltering in a hut, the building is sealed and set alight.

Rape is routine. Spectators are swept up in the vengeance. ‘Many… who came out of curiosity to see the action, or perhaps to get plunder, never went home again to tell the story.’ The road to Inverness ‘ran red with blood’.

The Jacobite army wasn’t all Scottish: some English volunteers fought for the Bonnie Prince, including one listed as a ‘soap boiler’.

O’Keeffe tracks the survivors from glen and isle to their final destinations: castle prisons, jail ships, gibbet, block, gallows. Of some 3,000 Jacobite men arrested, one-fifth died of typhus, and only one in 20 of those remaining faced trial for treason; lots were drawn to determine who faced the hangman.

Many were sentenced to lives of ‘indentured servitude’ in the West Indies and Virginia. A few struck lucky. One ship was liberated by pirates near Martinique; a well-connected felon became a colonel in the Prussian army.

As for the Bonnie Prince, he evaded capture for months before slipping away to France. He may have been permitted to escape – ‘as a prisoner he would have become a more dangerous focus of disaffection than as either a fugitive or an exile’.

The jingoistic fervour stirred up by Jacobite defeat had one particularly auspicious consequence. In October 1745, two theatre productions in London concluded with a rendition of a new song called God Save The King.

Culloden defined its protagonists. The ‘Butcher’ Cumberland never won another battle. He died at 44, morbidly obese. A post-mortem found ‘not one drop of blood in either of the vesticles of the heart’.

Charles returned to Paris before an enforced exile, according to the terms of a peace treaty between Britain and France. Life thereafter was one long debauch, 41 years ‘of decline and disappointment’.

He died in the same room in which he was born, his legend resting entirely on the incendiary 14-month revolution that rattled, and reshaped, Georgian Britain.