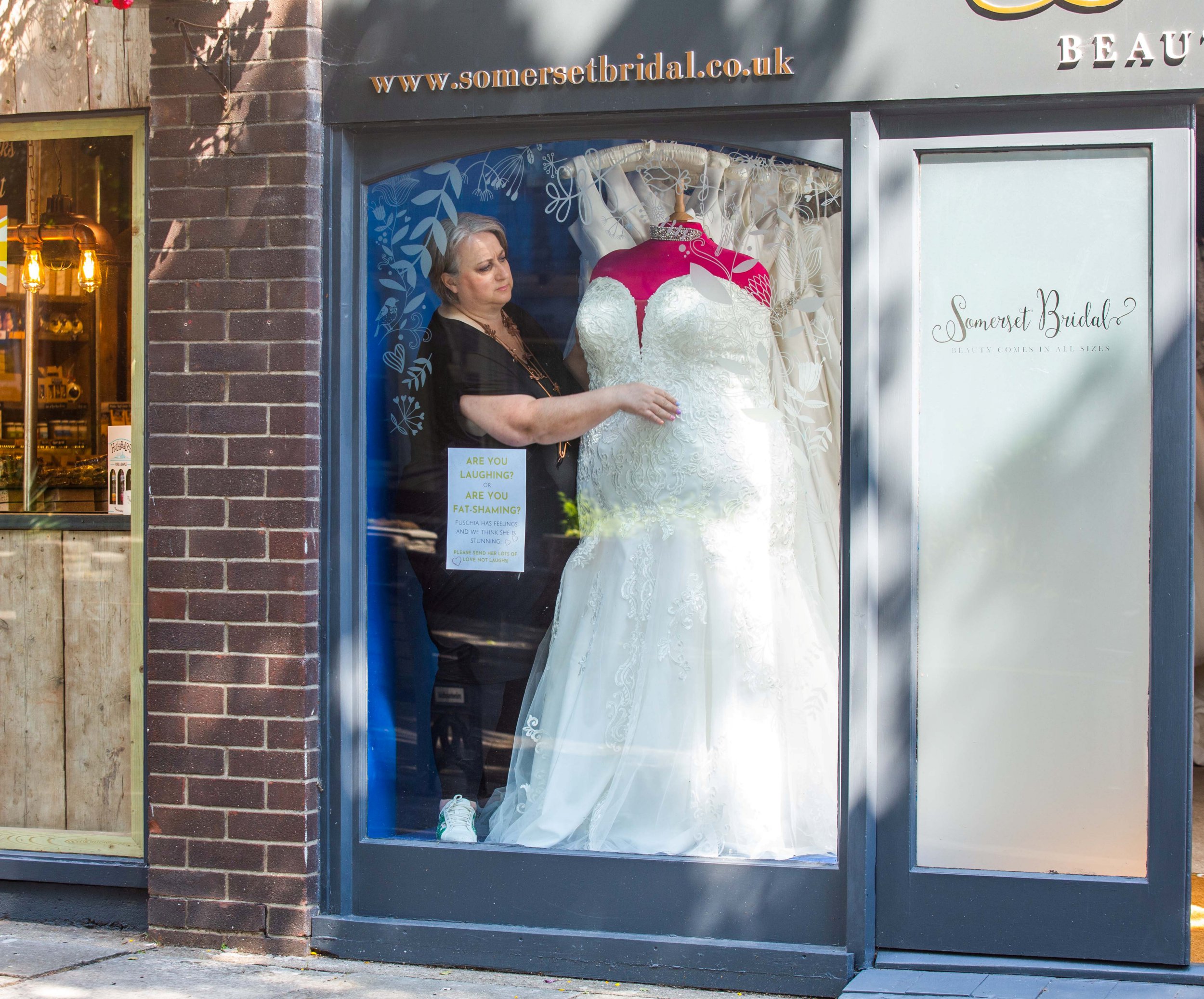 The owner of a bridal shop who placed a plus-size mannequin in her window – and as a result hears regular rude comments from passers-by – has spoken out about fat-shaming.

Debbie, 53, put the mannequin in a wedding dress in the window display of her shop, Somerset Bridal in Minehead.

But she says she now has to listen on a daily basis to harsh comments being aimed at her and the mannequin over its size.

Debbie says she installed the mannequin in April after getting it specially made following years of unsuccessful searches for a large size dummy.

But the mannequin – nicknamed Fuschia – has attracted negative attention.

Debbie has even had to put up a sign asking people to show the mannequin some love not hate.9

She said: ‘There’s quite a lot of mothers with children coming up to the window.

‘They point at the mannequin and say “don’t you ever get that fat love, no one’s going to want to marry you when you’re that fat”.

‘These are mothers saying it to their six, seven-year-old children.

‘They’re trying to make their children thinking about how fat and thin they are – using the mannequin to say “you don’t want to look like that”.’

After proudly displaying Fuschia at the front of the shops, the comments began while Debbie was doing appointments – with the cruel words being heard from the store.

Somerset Bridal’s new sign reads: ‘Are you laughing? Or are you fat-shaming?

‘Fuschia has feelings and we think she is stunning. Please send her lots of love and not laughs.’

Debbie said: ‘They’ll do the heckling from the pavement and then come up closer to have a look and see the sign and then they think “Oh my days, what have I just said”.

‘It’s sort of not stopping them but it’s stopping people in their tracks after they’ve done it.’

It isn’t just Debbie who hears the comments either, it’s her clients who are trying on dresses for their special day.

‘We were like “ignore him ignore him, he’s just being stupid” and we pushed it off.

‘But she was obviously quite upset that the very dress she had tried on from the mannequin fitted her perfectly and so she knew she was that size.’

A fellow bridal shop owner made the mannequin to add to Debbie’s collection – which range from a size 10 to a 20 (the biggest Debbie could initially find).

She’s hoping Fuschia – and her new accompanying sign – can change the attitudes of passers-by.

Debbie said: ‘They shout some really leery things at the mannequin and we’ve had enough.

‘And if they think that it’s okay to talk to a mannequin like that – who can’t respond back – then what are they saying to their family about people of all sizes?

‘The surprising ones are the old ladies that will stand there and go “oh my god, would you believe someone’s going to marry someone that fat?” and you’re thinking “what planet are you on”?’

Get in touch at [email protected]