Bridezilla is SLAMMED for demanding that her fiancè get a second job to pay for their $80,000 wedding after she QUIT her own role to plan the event – as internet users urge him to leave her

A bride-to-be has sparked horror online after revealing that she told her future husband to find a second job in order to fund their extravagant wedding.

Not only did the unknown woman state that she expected her fiancé to work around the clock to foot the bill, she also shared that she had quit her own job because planning her big day was now her main priority.

A screenshot of the woman’s comment was posted to the Bridezilla group on Reddit, where it has proceeded to go viral. 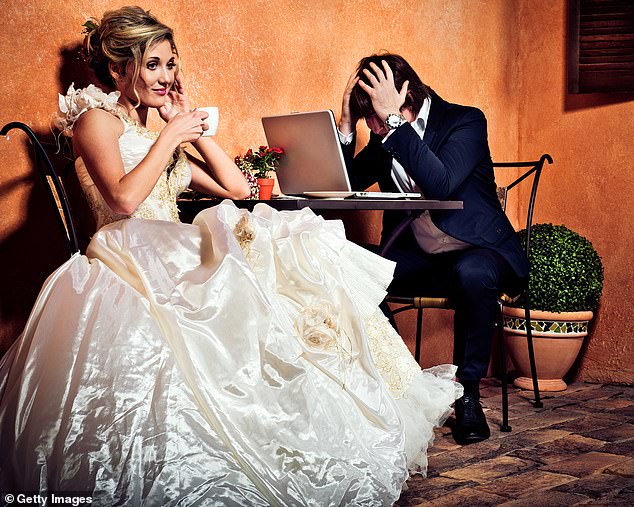 Entitled: An ‘egotistical’ bride has been slammed after she complained that her husband would not get a second job when she quit her own to plan the wedding (stock image)

Reddit user @PheterPharker, believed to be based in the US, claimed that his own fiancé had come across the original post in the bridal Facebook group Bride Vibes.

Asking the Facebook group members for advice, the woman, posting anonymously, admitted that she had resigned from her own job as the wedding planning was ‘taking up so much time’.

Incredulously, she claimed that she did not have time to get ready and commute to work alongside planning for her nuptials.

The irate bride-to-be added that her prospective husband is flat out refusing to meet her demands to find a second job in order to pay for their $80,000 ceremony.

She proceeded to ask for advice on how to convince him to take on more work, rather than hear him out that they were spending too much money on the whole ordeal.

Reddit users were floored by the woman’s attitude. ‘This level of bridezilla is not going to be any less entitled as a wife, especially if she’s already spouting s**t like ‘happy wife, happy life,’ and quitting her job and demanding he take a second one,’ a commentor with the handle @ArchDemenBlood wrote.

The bride’s emphasis on ‘my wedding day’ and ‘my dream wedding’ were also called out by flabbergasted Reddit members.

‘He has to get out while he still can! “MY” wedding, “MY” special day? So it’s just another day for him,’ a user posted.

‘Maybe he’d like it to be special too instead of being too exhausted to enjoy it from working 2 jobs. Or weighed down with debt. I cannot believe someone wants an 80 grand wedding and then decides it’s the perfect time to quit her job. Mister, RUN!’

Similar sentiments, telling the groom to run for the hills, were echoed by many members.

‘Big oof on that one… so many red flags, hopefully that guy saves himself before he’s actually married to that,’ a bemused comment read, while another simply stated, ‘Run, Forrest, run’.

Many users also questioned the ludacris nature of having an $80,000 wedding, when it could require the couple to spiral into debt.

‘Delusional. $80k will buy a house in a lot of places or is a fantastic down payment in most,’ a user under the guise of @abc1971 wrote.

This bride’s demands come just days after a woman, known only as Emily, became the subject of backlash after revealing that her parents paid for her ‘big, fun’ $165,000 wedding.

Detailing her 10-month long engagement and wedding celebrations to Refinery29, the Arizona-native drew criticism for allowing her parents to fund such extravagance when the newlyweds are ‘aggressively’ paying off her husband’s six figure student loan debt.

The bride told the outlet that she enjoyed everything from showers, dress fittings and a bachelorette party in the lead up to the wedding on her parent’s dime as she had lost her job a month after getting engaged.

Over 360 people weighed in in the comment’s section, expressing their frustration.