Who was present at Victorian Premier Daniel Andrews’ press conference was just as interesting as who was absent.

The absentees were Health Minister Martin Foley, Police Minister Lisa Neville and Industry, Tourism and Sport Minister Martin Pakula, three of the four MPs who announced their retirement on Friday. 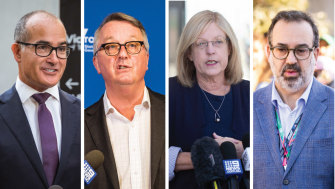 The trio are giants of Victorian Labor, racking up 51 years’ experience between them, but they were not present at the press conference officially announcing their retirements.

This wasn’t about them. It was about shoring up the future of the party and the government.

Instead of the three MPs, Treasurer Tim Pallas was front and centre, striding towards the microphones to declare his support for Transport Infrastructure Jacinta Allan to replace James Merlino as Andrews’ loyal deputy.

As a self-described “senior figure” within the Right faction, Pallas’ public message to his own was clear: fall behind Allan, a member of the opposing Socialist Left faction, or risk disunity and disloyalty in an election year.

Everything about Friday’s seismic events took place with an eye on the election.

The ministers’ plan to depart before the November poll had been an open secret for months, despite Andrews trying to deadbat the issue any time journalists raised it.

Neville’s battles with her health have been well documented. Diagnosed with Crohn’s disease in 1988, she underwent surgery last year and wound up in intensive care after a particularly nasty illness. She returned to work last August after taking six months off but told Andrews she wanted a year to decide whether she could balance her health and the demands of her job.

Pakula had told colleagues months ago he was weighing up his future, and Merlino had been contemplating retirement for the better part of a year.

And few would be surprised that Foley, who was given the health portfolio in September 2020 – steering the state through the bulk of the pandemic and living with the constant burden that one’s actions or inaction could result in the death or disease of fellow Victorians – might need to look after himself for a spell.

Late on Thursday, journalists learned the ministers would be announcing their retirements imminently.

Phones lit up with calls and texts, but MPs and their staffers – usually chatty – were keeping schtum. It had all the hallmarks of carefully planned political choreography.

On Friday morning, a flurry of emailed statements pattered into inboxes with the rhythm of a drum.

On and on it went.

An hour later, text messages went out, alerting the media to a press conference. Only Merlino, who has served the people of Victoria for 20 years, was allowed to attend and listen in person to Andrews praising his work (Merlino, too, made sure to endorse Allan as deputy).

The others were left to arrange their own media interviews to commemorate their years of service.

The controlled nature of Friday’s announcements was designed to draw, with surgical precision, a line in the sand – no allowing ministers to make announcements one after another, which looks messy and ill-disciplined. Now, Andrews’ new frontbench has ample time to build profiles with the Victorian public before the November poll.

If his plan comes to fruition, Andrews will have delivered a masterstroke rarely seen in Victorian politics; installing a factional colleague and ally as his deputy and anointing his heir apparent. Presumably, at a time of his choosing.