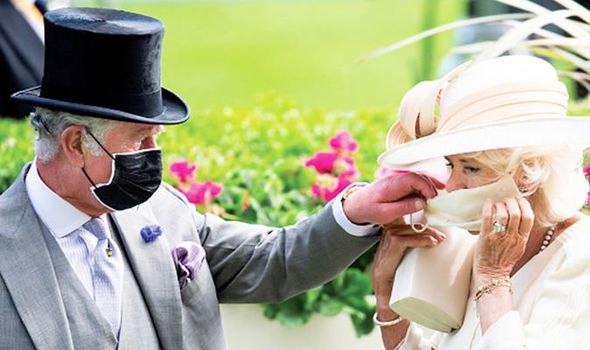 Yesterday the Duke and Duchess of Cornwall released their annual Christmas card photograph following Prince William and Kate Middleton’s offering. But unlike the Cambridge’s which had a slight nod to festive period, Prince Charles and Camilla opted for something a little more informal and rather intriguing. Express.co.uk spoke exclusively to Judi James, a body language expert, about the image of the royal couple.

The image was taken at Royal Ascot presumably sometime this year.

Prince Charles is on the left and is helping Camilla with her face mask who stands opposite him.

Speaking about the image, Judi said: “There’s no real nod to Christmas here, but the more intimate moment in a rather formal setting does hint at the couple’s future role as monarchs.

“[The photo] is exclusively about them, rather than any family reference or more informal posing, and it could subtly hint at Camilla’s role as queen, being used to illustrate a kind of mutual support system for the couple, going forward.

“Does this rate as a public display of affection? Or is it is a seasonal and slightly fun reference to the situation we are all currently in?

“As a romantic gesture it is a rather elderly one, like tucking your partner’s rug round their legs or holding their coat while they try on clothes in M&S but as such it probably works and the way Camilla’s raised hand features her engagement and wedding rings does lent it a subtle air of romance,” she continued.

“It’s also interesting that this appears to be more of an ‘unofficial’ moment rather than a posed one, giving the royal fans what looks like a glimpse of the closeness between Charles and Camilla.

“It looks primarily chosen to show Charles himself in a good and not-often-glimpsed light too, making him appear to be the caring, attentive and protective husband as he helps his wife on with her face mask.

“His intense eye-gaze shows she has all his attention here as he puts out one hand to prod the mask and that sense of undivided attention and concern is not something we often see in public from a couple whose appearances normally involve Charles taking the spotlight while Camilla shadows him,” Judi added.

Royal fans were left divided by the choice of photograph and took to social media to comment.

Robert Craig mentioned: “You’re settling examples for the rest of us! I appreciate that! Merry Christmas to the two of you!”

“Well, it’s very topical. And it’s cute. Sorta sums up the year. Help each other through. Not an ordinary Christmas card shall we say?!” Taryn Morgan added.

A confused Char Macfarlane asked: “What kind of christmas card is that?” While Sharon Ruth simply stated: “I don’t understand.”

Hannah Narvz, on the other hand, wrote: “Lovely picture… I kind of miss the tradition of at least something related to Christmas… He’s is the future head of the Anglican Church…. all due respect to all different beliefs.. it feels sad Christ completely out of Christmas… not even a bubble in the card…”

Clair Turnbull ranted: “Why on earth use that photo for your Christmas card. Talk about ram it down everyone’s throats you’re supposed to SMILE in photos. So sick of this being normalised everywhere – it’s NOT NORMAL OR CUTE OR FUNNY.”