Prime Minister Scott Morrison is prepared to reconsider Industry Minister Christian Porter’s position on the front bench if he is found to have breached ministerial standards by accepting anonymous donations for his legal fees.

Mr Morrison would not guarantee Mr Porter’s position in the ministry on Thursday, saying he was prepared to make “difficult decisions” if departmental advice concluded the standards had not been met. 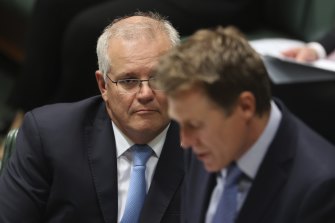 “I have taken decisions in the past, difficult decisions, when I believe [standards] haven’t been adhered to and decisions have been taken as a consequence of that,” Mr Morrison said on Thursday.

“In the same way on these issues, I will follow the same process. I’ll deal with it carefully, and as always I’ll ensure that the ministerial guidelines are adhered to.”

Mr Porter has faced intense criticism since declaring on Tuesday he had accepted an undisclosed sum of money through a blind trust to help fund his defamation case against the ABC and its reporter Louise Milligan, which settled earlier this year.

Mr Morrison would not be drawn on whether he or the cabinet knew Mr Porter’s legal fees had been partly paid by the blind trust before he declared them in his register of interests. Asked why he had not simply instructed Mr Porter to repay the money or disclose the identity of the donors, Mr Morrison said: “because I am ensuring the ministerial guidelines are adhered to”.

Labor leader Anthony Albanese stepped up his attack on Thursday, saying: “Christian Porter should go and he should go today”.

“It is simply untenable for a minister of the Crown to receive up to $1 million from sources unknown in order to pursue a private legal matter and then say that he doesn’t know where the money came from,” Mr Albanese said.

Following a severe political and public backlash to Mr Porter’s actions, Mr Morrison on Wednesday commissioned formal advice from his department about whether Mr Porter had breached the ministerial standards and “any actions the Minister must take to ensure that he meets the standards.”

Former prime minister Malcolm Turnbull, legal experts, and transparency advocates, as well as Labor and the Greens, were among those to condemn Mr Porter’s actions and to call for him to disclose the source of the money or return it.

Mr Porter has maintained he disclosed the trust arrangement in accordance with the rules and his actions were consistent with disclosures made by other MPs of personal legal matters that have benefited from contributions or reduction in fees.

He updated his register of interests on Tuesday to declare a blind trust, known as the “Legal Services Trust”, had made a contribution to his fees, noting he had “no access to information about the conduct and funding of the trust”.

The statement of ministerial standards requires that ministers “ensure that they do not come under any financial or other obligation to individuals or organisations to the extent that they may appear to be influenced improperly in the performance of their official duties as Minister”.

The standards refer specifically to the acceptable use of blind trusts, but only in the context of shareholdings as a means of avoiding conflict of interest issues. However, it notes a minister must declare any interests to the Cabinet and Prime Minister if “reasonable apprehension of a conflict of interest arises based on the initial composition of the assets held by the trust”.

Mr Porter sued the ABC for defamation in March over an online article he alleged portrayed him as the perpetrator of a rape in 1988. He denies the allegation and the case was settled in May.

Mr Porter has never disclosed his total legal bill from the litigation, but estimates have placed it as high as $1 million. The ABC’s bill totalled $780,000, including a $100,000 payment for Mr Porter’s mediation costs to settle the matter.