The world’s freshwater lakes have lost as much as a fifth of their oxygen levels in four decades, with climate change blamed for a drop that threatens ecosystems and drinking water quality.

The study, published in Nature journal on Thursday, covered 393 temperate lakes mostly in North America and Europe, and tracked oxygen and temperature trends spanning 1980 to 2017. 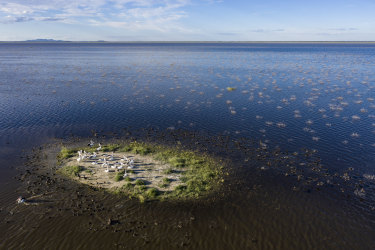 Lake Cowal, the second largest inland freshwater lake in NSW. A global study has found deep waters in temperate lakes have lost almost a fifth of their oxygen levels over the past four decades. Credit:Nick Moir

Over that time, oxygen levels in lakes have dropped by an average of 5.5 per cent at the surface and 18.6 per cent in deep waters, or much faster than the pace of oxygen decline in the world’s oceans.

“All complex life depends on oxygen. It’s the support system for aquatic food webs. And when you start losing oxygen, you have the potential to lose species,” said Kevin Rose, a professor at the US Rensselaer Polytechnic Institute, and one of the authors of the paper. “Lakes are losing oxygen 2.75-9.3 times faster than the oceans, a decline that will have impacts throughout the ecosystem.”

The difference in the decline of oxygen at the surface and at depths within the lakes was partly because of increased production of phytoplankton and so-called algal or cyanobacterial blooms in some areas because of warming temperatures and higher nutrient inflows. Surface waters have warmed at the rate of 0.38 degrees per decade.

Lakes, though, were becoming more stratified with less mixing, contributing to the faster declines in oxygen at depth where temperatures have been more stable, the researchers found. 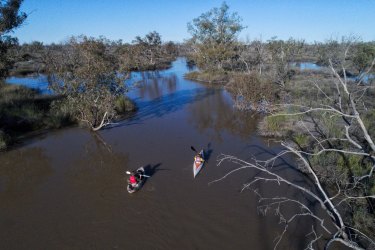 Oxygen levels in lakes are declining at as much as nine times faster than in oceans, the study found.Credit:Nick Moir

“Our results suggest that climate change and declining water clarity have altered the physical and chemical environment of lakes,” the paper said.

While they cover about 3 per cent of the earth’s land surface, lakes are home to a much larger share of wildlife.

“Lakes are the indicators or ‘sentinels’ of environmental change and potential threats to the environment because they respond to signals from the surrounding landscape and atmosphere,” said Stephen Jane, the paper’s lead author, who completed his PhD with Professor Rose. “We found that these disproportionally more biodiverse systems are changing rapidly, indicating the extent to which ongoing atmospheric changes have already impacted ecosystems.”

Of the 393 lakes, 87 of them showed increases in dissolved oxygen and temperatures. That departure from the overall trend was attributed to eutrophication, or excessive nutrient levels from nearby agriculture or developed land cover compared with other lakes.

“Lakes are the indicators or ‘sentinels’ of environmental change and potential threats to the environment.”

“[W]e note that these same lakes exhibited consistently low concentrations of deep-water dissolved oxygen, as is expected when a large phytoplankton biomass sinks and is decomposed in deep-water
habitats,” the paper found.

The rapid deoxygenation of deep lake waters meant such habitats were ”especially threatened”, putting oxygen-sensitive species particularly at risk. The changes, though, are likely to quicken, the paper concluded.

“Although already rapid, future losses in lake dissolved oxygen may accelerate owing to continued anthropogenic modifications of the environment,” it said.

“Many lakes have undergone active management to reduce nutrient loads, in part to mitigate phytoplankton growth and
deep-water oxygen loss, but our findings suggest such actions will probably require more rigorous efforts in the future to counter the effects of climate and land-use change.”

Apart from North America and Europe, the study also included lakes in New Zealand and Japan.