The value of coal exports will halve as the country slashes its greenhouse gas emissions under the Coalition’s plan to meet its net zero by 2050 commitment, with modelling of the proposal revealing huge financial penalties if Australia fails to take action.

The modelling, released on Friday afternoon, also shows much of the government’s plan relies on international carbon offset permits and that without technological breakthroughs yet to occur, Australia will only achieve 85 per cent of its 2050 target. 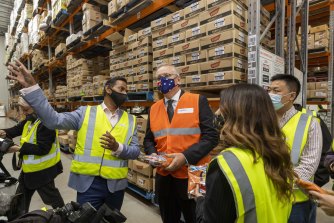 Prime Minister Scott Morrison campaigning in Melbourne on Friday, before the release of modelling of the government’s net zero plan.Credit:Wayne Taylor

The government released its plan to net zero on October 26 but held back the deeper analysis, which is a composition of traditional economic modelling and “bottom-up” research by consultancy group McKinsey based on its own database of low emission technologies.

It finds that Australia, by adopting a net zero target, will achieve net economic benefits of about $2000 per person compared to not taking any action.

Almost a fifth of that gain is achieved by avoiding a “risk premium” being imposed on Australian businesses and governments for failing to commit to net zero. The analysis suggests the economic cost of this higher cost of borrowing could amount to 0.9 per cent of GDP by 2030 or more than $30 billion a year.

The modelling argues that adopting a net zero target will produce more jobs than are lost, finding a net gain of 62,000 jobs in regional, export-facing, energy and heavy industry sectors.

Up to 52,000 jobs could be created in minerals need for clean energy technologies, such as cobalt, copper and nickel. Most of those are likely to be created in southern Western Australia, the Pilbara and regional South Australia.

But the modelling notes the value of coal exports will be halved by 2050. It does not report the number of job losses caused by this hit to the sector.

Coal producing areas such as the Hunter Valley in NSW could enjoy thousands of direct jobs in new manufacturing for renewable energy, such as wind turbines, or “green ammonia”.

McKinsey estimates more than 100,000 direct jobs could be created in export and domestic sectors if there is a rapid and lasting uptake of “advanced technologies” that help reduce Australia’s overall emissions.

The report makes explicit it did not examine the financial costs to Australia from climate change.

The government has so far promised at least $21 billion towards supporting new industries and businesses to reach the net zero target. But the modelling confirms this will still fall well short of the stated aim, reaching 85 per cent.

The rest has to be made up by technological breakthroughs that are yet to be created.

“The modelling shows that a clear focus on driving down technology costs will enable Australia to achieve net zero emissions by 2050 without putting industries, regions or jobs at risk,” he said.

“We’ve set out a credible pathway to net zero by 2050 while preserving our existing industries, establishing Australia as a leader in low emissions technologies and positioning our regions to prosper.”

The report makes clear the importance of international carbon offset permits to reach an 85 per cent reduction in Australia’s emissions.

After all the expected reductions from technological advances, Australia is still expected to be producing 215 million tonnes of greenhouse gases a year by 2050. International permits are assumed to reduce this by another 94 million tonnes.

About 300,000 hectares of land will be required for farm plantings to further reduce emissions.

The modelling shows that trying to cut emissions without sequestering carbon in land or using international offset permits will be extremely expensive. It estimates the cost per tonne could reach $400, which would be 16 times more than the cost assumed by McKinsey across its report. 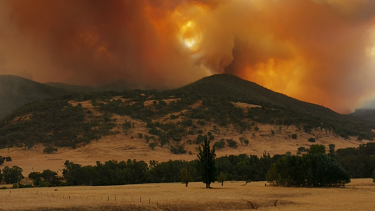 The government-commissioned modelling of its net zero policy did not cost the impact of climate change on Australia.Credit:NSW Coroners Court

Such expensive abatement would support “backstop” technology, such as direct air capture, which entails the removal of greenhouse gases from the air.

The modelling expects 90 per cent of the national car fleet to be zero emission vehicles by 2050. But most of that uptake occurs after 2030.

Labor’s climate change spokesman Chris Bowen said the fact the report was released on a Friday afternoon did not bode well for the research.

“It took the Coalition almost a decade to release a ‘scamphlet’ on net zero, and weeks more to release the detail,” he said.

“Labor will take the necessary time to consider this detail, as a responsible alternative government should.”

“This is a piece of fiction trying to cover up inaction,” he said.