And now the first imagery from the BBC adaptation of Sally Rooney’s best selling novel has now been revealed ahead of its highly-anticipated release next year.

In the snap, which was released this week, Alison can be seen gazing at the camera while wearing a khaki coloured jacket and a black polo neck. 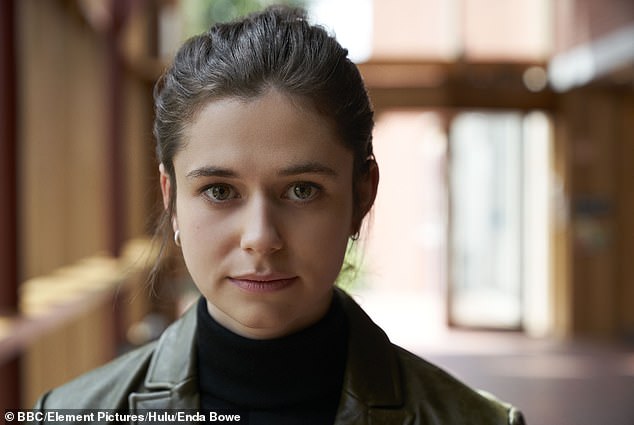 The novel is packed full of racy moments which will set viewers hearts thumping and will likely follow in the footsteps of Rooney’s Normal People, which wowed viewers with its intimate, realistic sex scenes.

Alison has previously been spotted on set with actor Joe Alwyn, who plays Nick, in Bray, Co. Wicklow in Ireland.

Unlike the rest of the cast, little is known about the show’s lead role of Frances, who will be played by emerging talent Alison.

She will make her debut in the series having graduated from drama school Lir Academy in Dublin, Ireland. 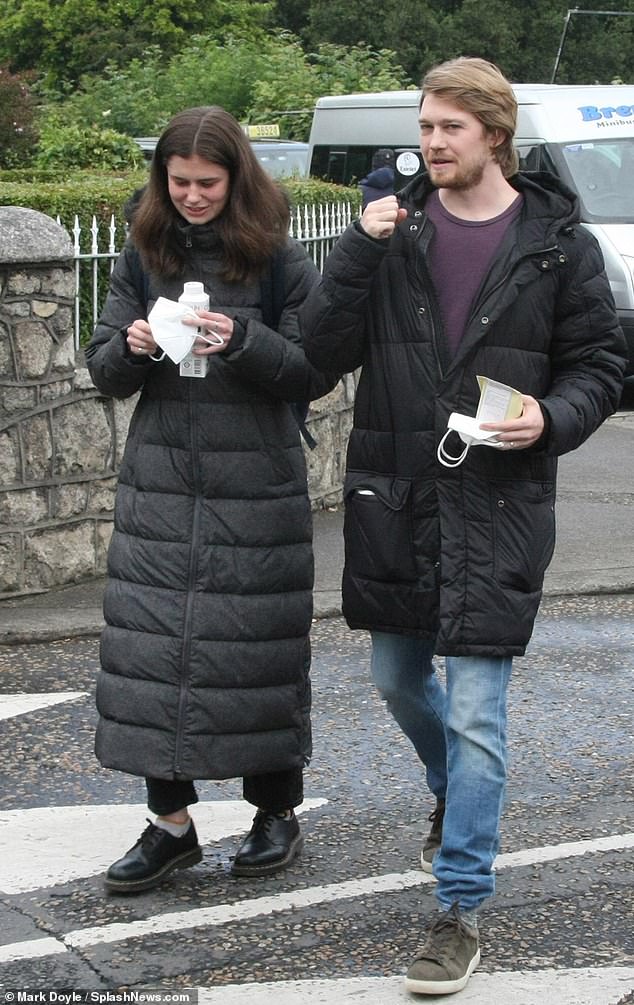 While the snap offers fans a first glimpse of the actress in character ,Alison has previously been spotted on set with actor Joe Alwyn, who plays Nick, in Bray, Co. Wicklow in Ireland

The plot follows best friends and ex-girlfriends Bobbi and Frances, who meet mysterious and sexy older couple Melissa and Nick at a poetry night in Dublin. 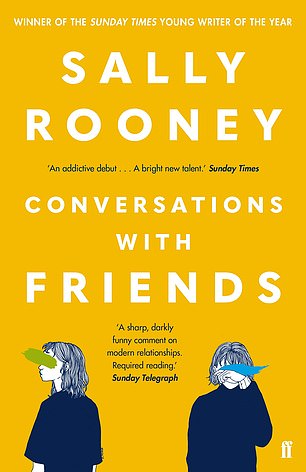 The 2017 book follows a mysterious, sexy married couple, Nick and Melissa, and their unusual attraction to two younger women, Frances and Bobbi

Bobbi immediately becomes infatuated with Melissa and openly begins a flirtation with the older woman, who appears flattered by the attention.

Meanwhile Frances and Nick embark on an elicit affair, with the foursome become more and more entangled with one another.

Nick ultimately reveals the affair to his wife, who accepts the relationship having had her own affairs, and Nick begins to date Frances openly within the group.

Eventually Frances rekindles her romantic relationship with both Bobbi and Nick, with the four continuing their elicit attraction to one another despite the complexities.

The new series comes after the success of Rooney’s 2018 novel Normal People which was adapted into a ratings smash hit TV series last year.

It saw show leads Paul Mescal and Daisy Edgar-Jones, who took on Connell and Marianne’s love story, soar to fame after it aired during the first lockdown.

Normal People has been the most watched show on BBC Three ever with more than 23 million downloads globally and over 6.75 million devices watching the first episode. This makes it the most popular programme on the channel ever.

The 12-part drama is based on Rooney’s bestselling novel about the turbulent relationship between working-class Connell [Mescal] and well-heeled Marianne [Edgar-Jones], has been praised for its unflinching take on sexuality. 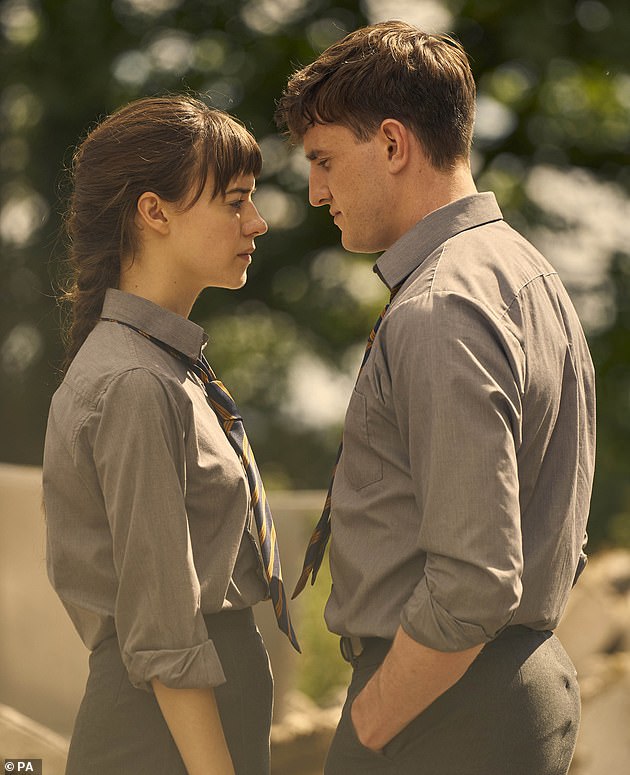 Huge hit: Normal People has been the most watched show on BBC Three ever with more than 23 million downloads globally and over 6.75 million devices watching the first episode (Mescal and Edgar-Jones pictured in show still) 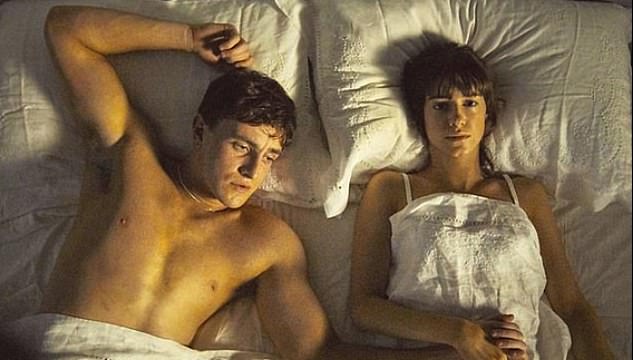 Author Rooney hit the headlines in October after  she defended rejecting the publisher’s offer to translate her new book – which topped UK and Irish charts since its release in September – saying she backed a cultural boycott of Israel.

However the decision sparked a wave of criticism against the author and screenwriter.

Some took to social media to label Miss Rooney’s decision as ‘anti-Semitic’, while others questioned why her books were published for an audience in China – which has been accused of human rights abuses over its treatment of Uighur Muslims.

But the author defended her decision – which she said was not to have the book published by an Israeli-based publishing house – and that the Hebrew language rights were ‘still available’. 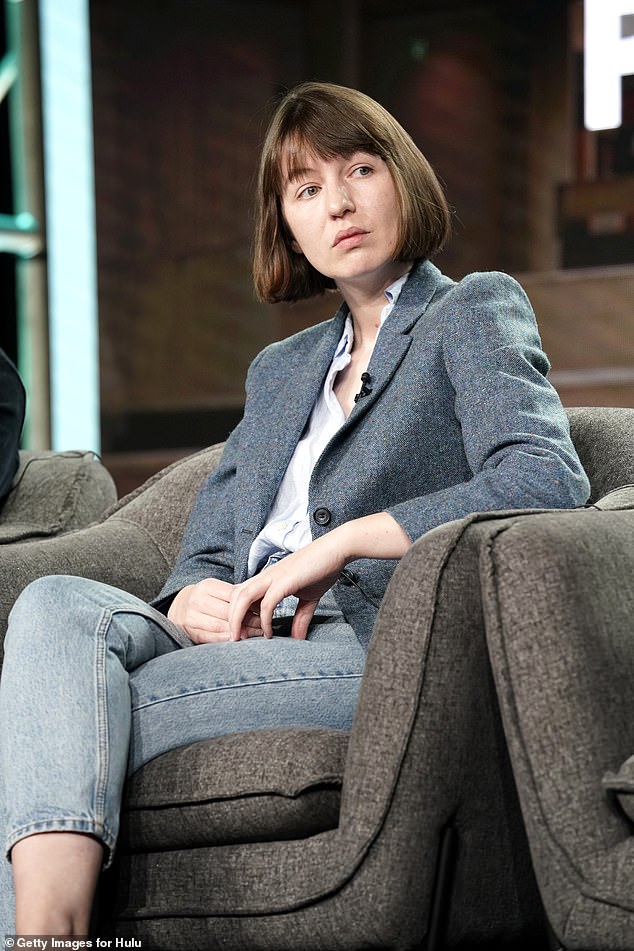