A couple have slammed people who accuse them of cheating after one of them invited an old school friend to join their relationship.

Amber and Brandon were strictly monogamous at first, but discussed the possibility of opening their relationship up to a third person.

It wasn’t until New Year’s Eve 2018 when they met one of Brandon’s old school friends, Eli Schalk, 21, at a party, that they realised that Eli, who is non-binary, could be the perfect person to add to their relationship. 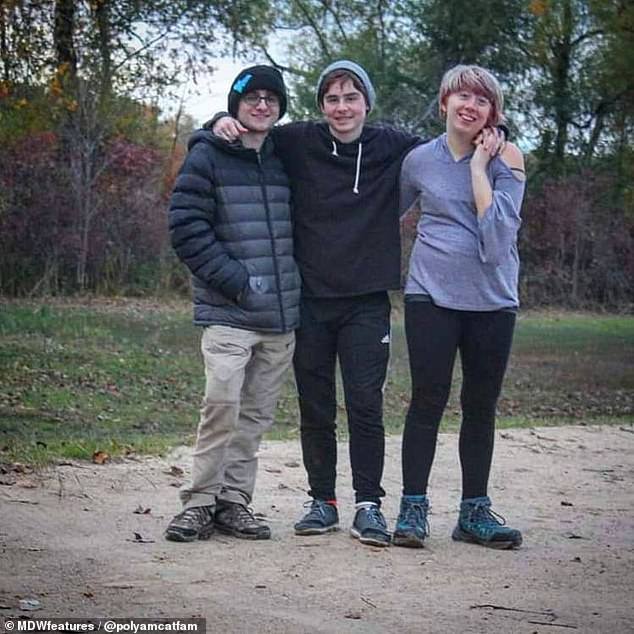 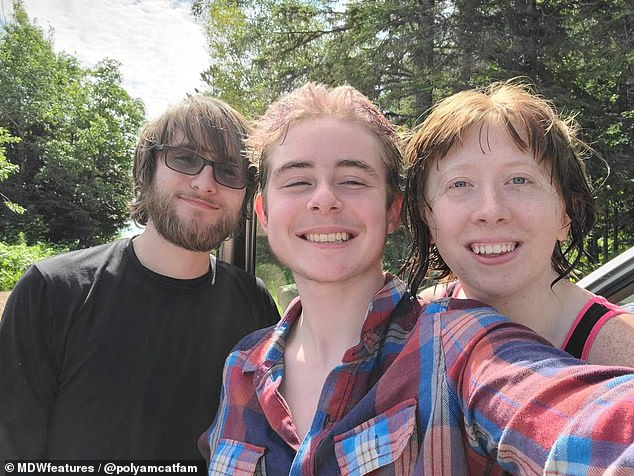 Amber and Brandon had been dating for several from January 2017 before they decided they wanted to bring a new person into their relationship. Pictured: Brandon, left, Eli, centre, and Amber right, enjoying time in the countryside 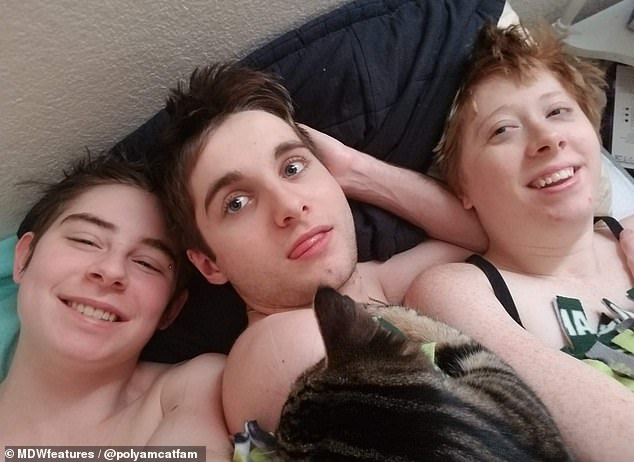 The couple remained monogamous until January 2019, when non-binary Eli joined them in their relationship. Pictured: Eli, left, Brandon, middle, and Amber, right

‘We were talking about the possibility of opening up our relationship but weren’t sure what we wanted from that yet,’ said Amber.

Brandon knew Eli from high school and was introduced to Amber over a board game at the home she shares with her boyfriend.

‘We had a good time playing board games and talking with friends, and the next day or so, we all mentioned to each other that we thought each other were attractive, and that we wanted to talk and see each other more.’

The three continued to hang out together and bonded over interests they had in common, such as art.

Eli had to go back to spring college classes in Lansing a few days later and before they left they gave each other gifts – stuffed animals and a bracelet – so that Eli had a little piece of themeven at a distance.

While the couple visited soon after, Amber asked Eli and Brandon if they could date as a triad.

‘We were talking about the possibility of dating but it was all hypothetical until we made a trip out to see Eli,’ Amber said.

‘I asked them both officially to date as a triad the day we arrived and they both happily said yes.’ 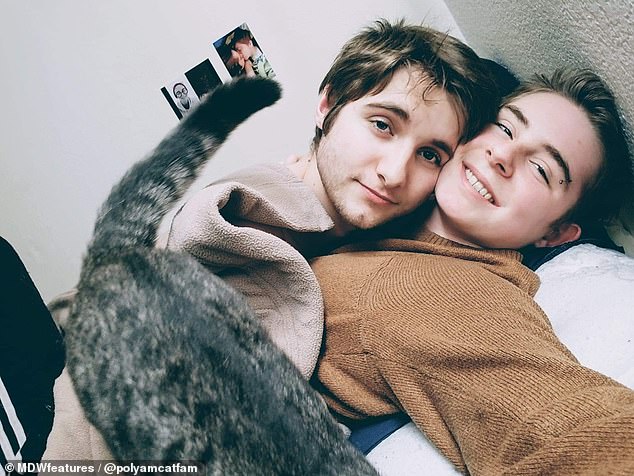 Brandon and Amber discussing the possibility of inviting another person to join their relationship and finally took the plunge when they met Eli at a party. Pictured: Brandon, left, and Eli, right, cuddling with one of their cats 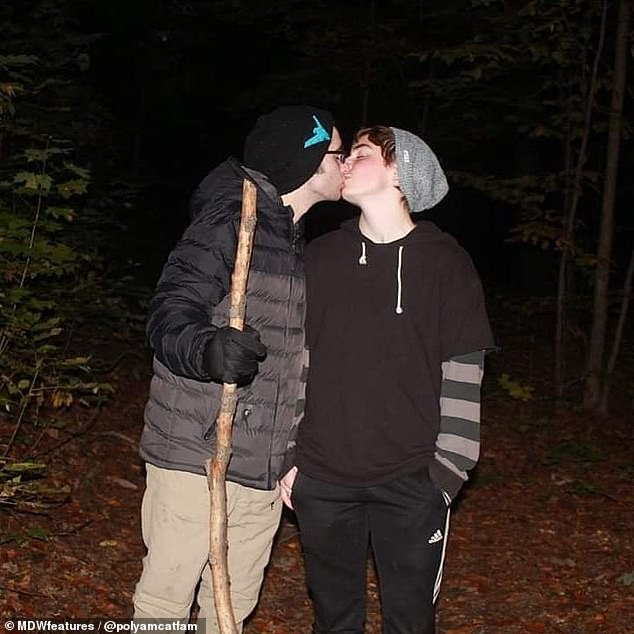 Brandon knew Eli when they were at school together and when they met again at a New Year’s Eve party in 2018 the couple thought Eli could be the perfect person to add to their relationship. Pictured: Brandon and Eli kissing

Their relationship was made official on January 7, 2019, and they have been together ever since and have five cats together.

For Amber, Eli, and Brandon, polyamory puts less pressure on an individual to fulfill another’s needs and as a result there is more love, communication, and perspective in their relationship.

When they first formed a triad, Amber admits that there was some jealousy, but with honest and open communication all issues were resolved.

‘In the beginning of our relationship, there were frequent moments of possessive and jealous feelings, but we would talk through them every time they arose and got to the root of each issue.

‘Since we were open to communication from the beginning, those moments don’t happen much anymore, if at all.

‘The hardest part to me is dealing with the fear of judgement and assumptions from others, but that fear has almost dissipated as well.

‘We have learned many things from each other and the triad experience as a whole. Eli has taught me more about incorporating science and spirituality into my daily life.

‘Brandon has shown me growth and structure, and both have shown me what is possible when humans genuinely care for each other and themselves simultaneously. 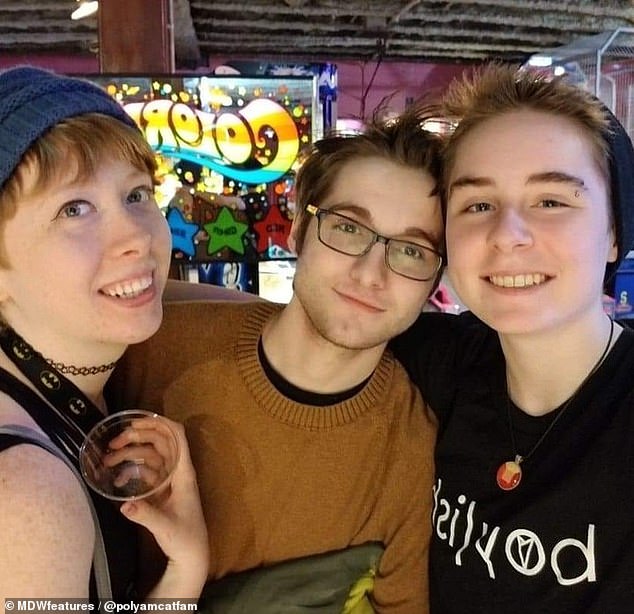 The three of them would hang out together as a trio, bonding over similar interests, such as art, before Eli had to go back to university to study. Pictured: The throuple enjoy a day out 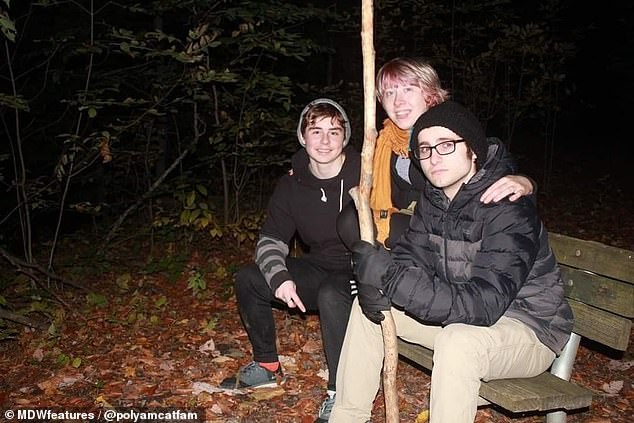 While they visited Eli at university a short while after they left, Amber asked Eli and Brandon if they would interested in forming a triad together. Pictured:  Eli, left, Amber, centre, and Brandon, right 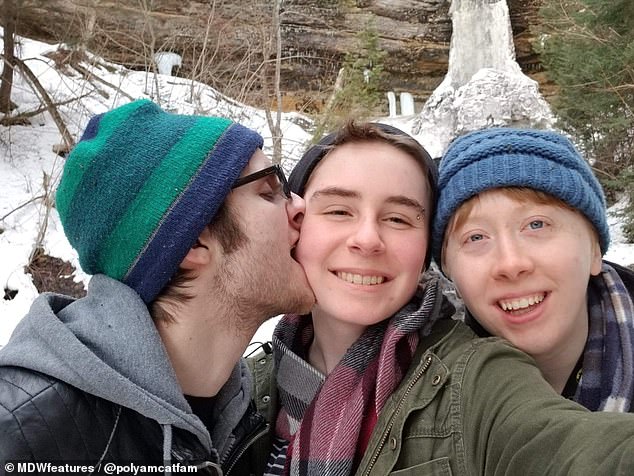 A week after meeting at the New Year’s Eve party in 2018, the trio formed a triad on January 7, 2019, and have been together ever since. Pictured: Brandon, left, Eli, centre, and Amber, right

‘As long as nobody is getting hurt emotionally or physically, every consenting relationship is just fine.

‘We all just want to love and everyone loves differently. Any support and happiness we can get on this planet should be encouraged and celebrated.’

Judgement from other people outside of their relationship was one of the hardest things for Amber, Eli and Brandon to deal with.

‘Judgement from society is my only issue with it now. Having to explain what polyamory is to everyone that I mention it to in my daily life is a small burden, and there have been some people that ask really intruding sexual questions right away or talk about how they could ‘never do that’ as if it is an inferior option that they need to tell me they won’t do.

‘Then some feel the need to tell us if they would sleep with a man, with a transgender person or with two people, when we really never asked for that information.’ 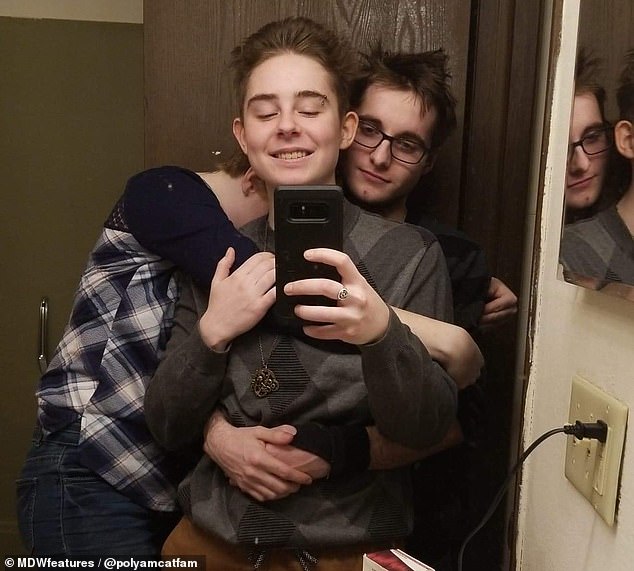 The triad say being in a polyamorous relationship puts less pressure on an individual to fulfill another’s needs and as a result there is more love, communication, and perspective in their relationship. Pictured: Amber, left, and Brandon, right, cuddle Eli, centre 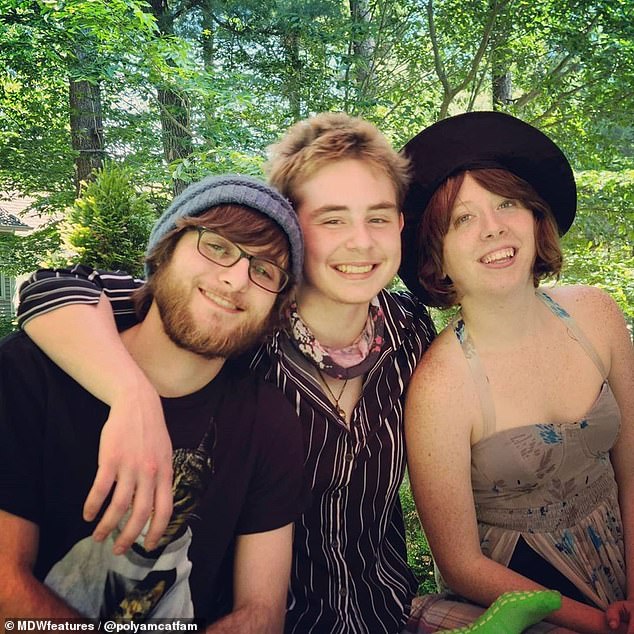 When they first started up their relationship together, Amber admits that there was some jealousy but with honest and open communication all issues were resolved. Pictured: Brandon, left, Eli, centre, and Amber, right 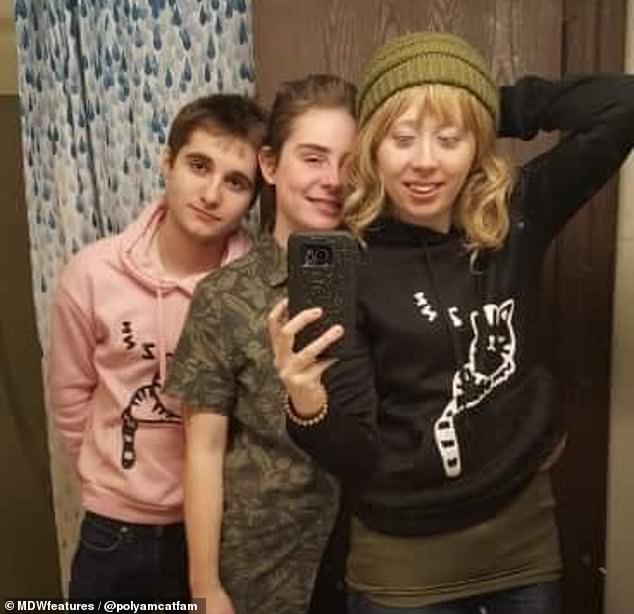 The throuple say judgement from people outside of their relationship has been the hardest part to deal with when they got together. Pictured: Brandon, left, Eli, centre, and Amber, right

People wrongly assume that having multiple partners is only ever a result of cheating or sexual promiscuity and so detractors remark that they could “never do that” – implying that being in a polyamorous relationship is an inferior option.

Amber said: ‘Polyamory helps us meet our romantic wants and needs in a way that doesn’t put unrealistic expectations on one given person.

‘Instead of wishing one person would be more cuddly, I can have cuddle time with both of them.

‘Instead of wishing I was into a certain show or book, they could talk about their shared interests with each other.

‘There is a lot more to it, but in essence there is more love, communication and perspective in our relationship than previous monogamous relationships we have been in.

For the most part, the reaction to their relationship is incredibly positive and those close to them are supportive.

Amber, Eli and Brandon plan to buy a house together one day, adopt children, and would like to see the day when marriage between three people is legal.

Finally, Amber emphasised the power of communication in relationships.

‘I don’t think most people in public know we are all dating. They might assume we are all friends, even though we do hold hands, hug, and kiss in public,’ she said.

‘It’s just so subtle that people may not see me kiss one then the other or realise we are all holding hands. Either that or they just don’t care.

‘We probably would get more looks if we were out and about more often, but with quarantine, living separate from Eli, and Brandon not being much of a bar or shopping person, we don’t actually end up in public much.

‘We plan to buy a house within the next couple of years. We want a big garden and our five collective cats we already have will move in with us of course.

‘We have discussed adopting kids one day and the possibility of marriage – though marriage is not legal for three people as of now. There will definitely be more animals and business or art projects in upcoming years. We want to grow old together and support each other through life.

‘Anyone who identifies with polyamory or isn’t sure where they lie romantically or sexually is valid in their journey and is allowed to use or not use labels as they see fit.

‘The key to any good relationship is communication. Communicate feelings that arise even if you don’t technically have to yet or even if it may be a hard conversation.

‘It will save a lot of energy and time to express things now and listen to your partner(s), other loved ones and yourself.’

They document their lives as a throuple on their Instagram account @polyamcatfam, which also features their much-loved pets.