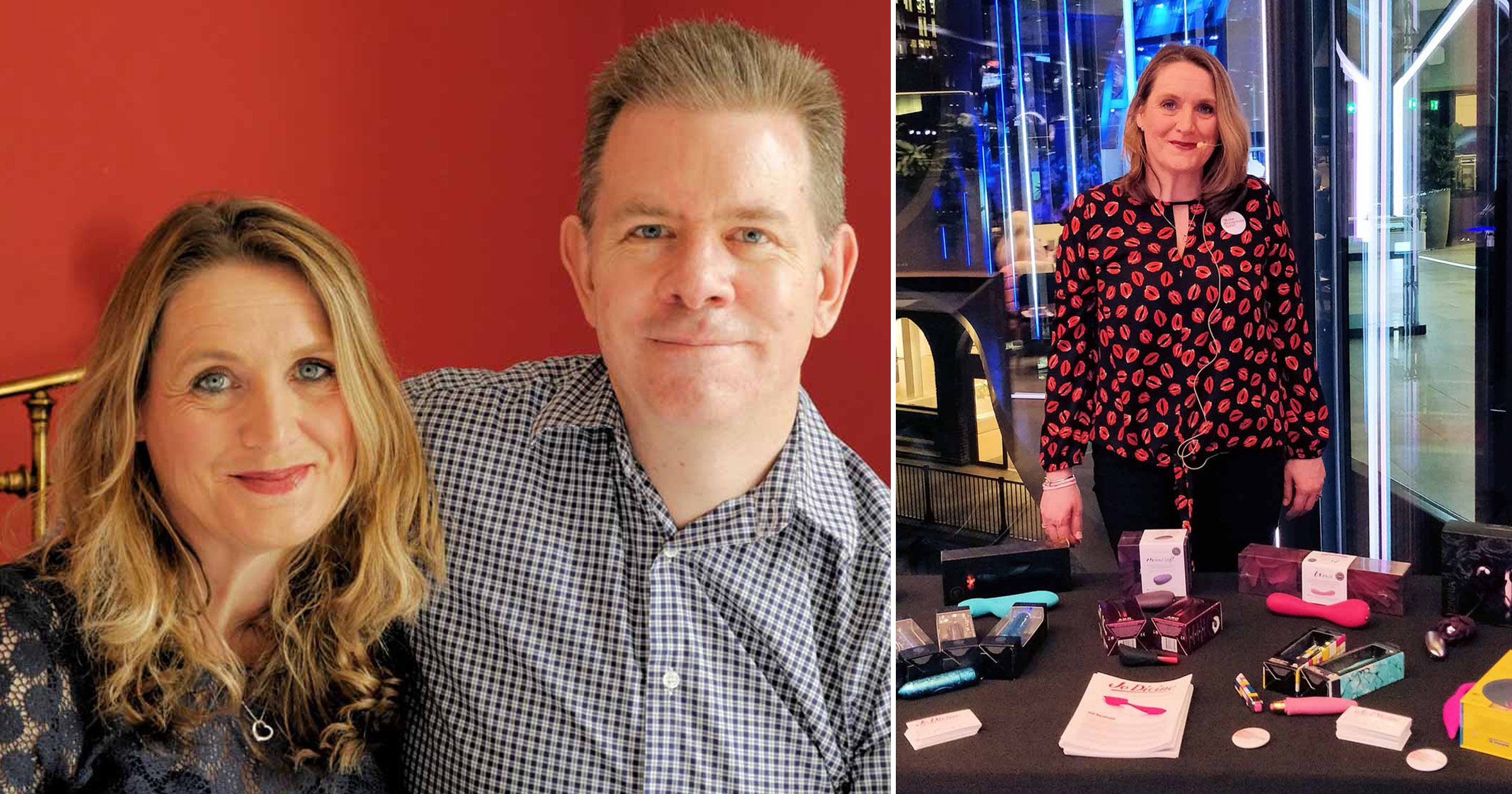 Launching a sex toy shop, Jo Divine, with her ex-computer programmer husband Paul, 54, hasn’t just been good for the couple financially, but has done wonders for their relationship, too.

Now, Samantha wants to spread the word of just how life-changing great sex can be.

‘Discovering I actually have a G-spot with one of our toys was really nice.

‘If you’re sexual as a young person you’ll want to be sexual as an older person. We have people in nursing homes who still have their sex toys.

‘Carers phone up ordering sex toys for the people they’re looking after.

‘And I want people to know that whatever their age they don’t have to give up on their sex life.’

Working as a nurse for many years, Samantha, who has two sons aged 19 and 17 and a daughter aged 21, adapted her skills to help women going through everything from cancer to hysterectomies and the menopause to reclaim their sexuality.

After appearing on Channel 4’s Sex, Myths and the Menopause alongside Davina McCall in May, where she discussed helping women through the menopause and demonstrated the use of a clitoral suction device, sales of that and their other products received quite the boost.

The mum said: ‘We did a month’s trade in two hours!

‘I believe sex should be fun whatever your age and I don’t like the word taboo.

‘Sex is everywhere, and it’s in every newspaper, but we don’t actually talk about it very well.

‘I offer simple, practical advice, like to use some good lube, talk to your partner, get yourself a simple sex toy and have some fun – that’s the most important thing.’

Samantha and Paul first met at a party in Greenwich in 1991, but she wasn’t into him straight away.

She said: ‘I fancied his friend and he fancied mine – but they ended up married and we got together, too!’

The pair tied the knot in 1997 before moving first to New York, USA, in 1999 for a year for Paul’s job, then settling in Tunbridge Wells.

Samantha was a stay-at-home mum when Paul started the sex toy business in 2007.

They had been considering throwing Ann Summers-style parties, but none of their friends sounded too interested – suggesting instead that, with his IT skills, Paul should start a website.

Thus, Jo Divine was born, with the couple advertising in women’s magazines.

The business was inspired by Samantha’s own experiences with gynaecological issues – from thrush and cystitis to urinary tract infections (UTIs) and bacterial vaginosis – which she now believes were caused by irritating ingredients in sexual lubricants.

She said: ‘From the age of 23, unfortunately coinciding with when I met Paul, I started to get these numerous infections.

‘I now know it was down to the lubes we were using.

‘It was often after sex, and I was finally diagnosed with vaginismus at 30, where my pelvic muscles would tighten and make sex either painful or impossible.

‘I was a trained nurse, and I’d never heard of it, but I was advised to have a drink to relax and iron the gusset of my knickers to kill the thrush bugs, which is a good idea, but I don’t have time to do that.’

These experiences made the couple want to only offer products free from irritating ingredients, such as glycerine, alcohol, dyes or parabens.

They sell only silicone, glass and metal, rather than latex, rubber or jelly sex toys, which can irritate the skin.

When they started using the products in their own bedroom, Samantha’s sexual health problems went away.

‘I feel very angry about what I went through, which is why I’m so passionate about our products,’ she said.

‘I was miserable for about 20 years. These kinds of problems really affect how you feel about yourself as a sexual being.

‘People think about what they eat and drink but give no thought to what they’re putting inside their vagina.

‘Some people have been quite dismissive, saying all lubes are the same, but they really aren’t.’

She said: ‘I’m known as the Lube Queen on social media.

‘For me, being able to combine my nursing experience and my own personal experience to help someone in their thirties, for example, going through breast cancer, or someone who is being battered by the menopause to regain their sexual confidence is wonderful.

‘Filming with Davina was great for that reason – and it had a massive effect on our business, too.’

Despite the ‘inevitable tears and arguments’ that have gone along with running a business as a couple, Samantha and Paul have enjoyed many fringe benefits in the bedroom.

She said: ‘We have the same attitude towards sex.

‘Like any couple, we have times when one of us doesn’t want to do it.

‘But working together forces us to communicate and removes any embarrassment around sex.

‘Now I want to keep educating people, so they can enjoy sex, too.

‘I want people to know how unique we are and what we’ve created as a husband-and-wife team.

‘I’ll be the oldest sex-pert in town, but I’m quite happy with that!’