DAN WOOTTON: So who’s laughing now? Ukraine’s comedian-turned-president Volodymyr Zelensky was dismissed as a joke, but the guts he has shown to stare down Putin has put our craven western leaders to shame

Oh, how they sniggered.

When famed physical comic Volodymyr Zelensky was elected President of Ukraine in 2019 with over 70 per cent of the vote on an anti-corruption mandate versus his pro-Russia opponent, the mainstream media treated his elevation as, well, a bit of a joke.

‘Ukrainians are waking up this morning and discovering that the last few months were not a dream. They really have elected a man who currently stars in a TV series as the president – as the country’s next real president,’ the BBC sneered in the hours after his historic election, having previously described him as ‘clueless’.

Commentators were even harsher.

The famous Ukrainian writer Oksana Zabuzhko wrote: ‘I hear an offscreen laugh of scriptwriters who have conjured all this plot for stupid Ukrainians.’

No one is laughing at Zelensky now. 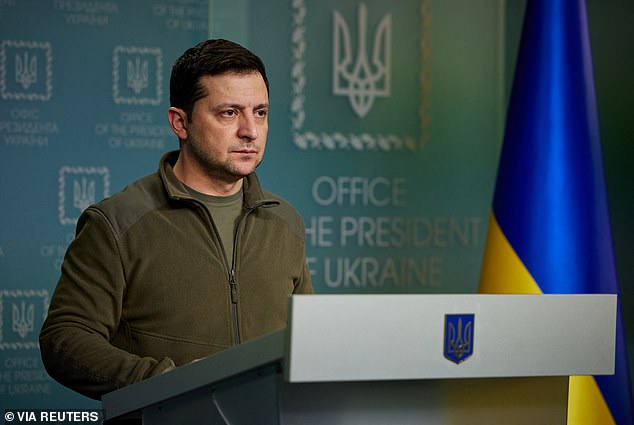 The Ukrainian president has proven he’s nothing like our craven modern politicians who don’t give a damn about the folk they represent; so much so that he’s prepared to die alongside his fellow Ukrainians to defend the capital Kyiv against the near certain upcoming onslaught from Vladimir Putin.

When the 44-year-old received an offer of evacuation from US authorities this weekend, with Russian troops continuing to encircle Kyiv, he delivered a line straight from a Hollywood action movie: ‘We need ammo, not a ride.’

Who believes that would be the response from a snivelling Macron, pampered Trudeau or braindead Biden in the same circumstances?

It certainly wasn’t the response by Afghanistan’s former president Ashraf Ghani who jumped on a US helicopter full of cash out of Kabul last year before it was even officially confirmed the Taliban were nearby.

No wonder Boris Johnson remarked after a recent phone call with Zelensky: ‘Jesus, that guy is brave.’

Because be in no doubt that the lives of Zelensky, his screenwriter wife Olena Zelenska and two children, daughter Aleksandra, 17, and son Kiril, nine, are now unquestionably on the line. 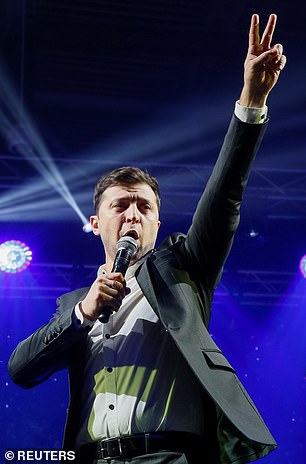 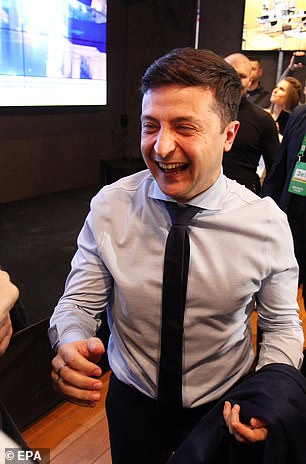 They’re Putin’s ‘number one targets’, with a death order being given to 400 brutal Russian mercenaries already operating in the city, who have express orders from the Kremlin to assassinate Zelensky, according to The Times today.

In a twist no scriptwriter could have predicted, Zelensky– once a comic star in Russia, the country now out to kill him – has become the world’s heroic leading man.

It’s Zelensky’s career in showbiz – he also won the local version of Strictly Come Dancing and is the Ukrainian voice of Paddington – that has helped Ukraine win the propaganda effort hands down.

His powerful oratory via official channels and social media has already changed the course of this conflict.

Indeed, some of his speeches over the past week have been so powerful that TV translators have had to stop talking because they can’t contain their emotions. 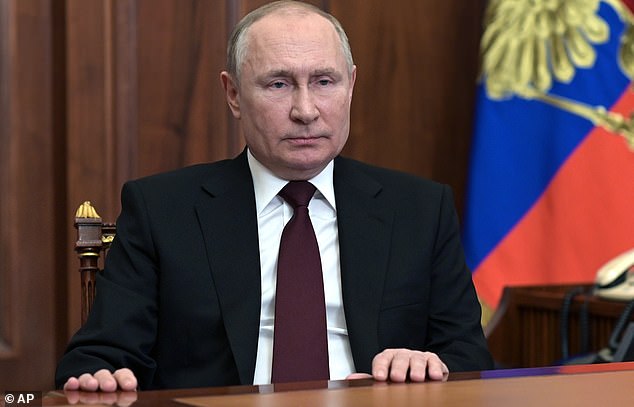 There was his savage taunt to Putin: ‘When you attack us, you will see our faces, not our backs.’

Or his address to the Munich Security Conference on February 19, where he helped the world wake up to the coming horrors by saying: ‘When a bomb crater appears in a school playground, children have a question: ‘Has the world forgotten the mistakes of the 20th Century?’ Indifference makes you an accomplice.’

And when the Russian disinformation campaign suggested Zelensky had fled the capital, he simply took his mobile phone to the streets and made a selfie video to reassure his people he wasn’t going anywhere.

‘We’re all here. Our military is here. Citizens in society are here. We’re all here defending our independence, our country – and it will stay this way,’ he insisted.

Then there’s the video call with EU leaders – reluctant to enter the conflict – soon after the Russian invasion, where he warned them: ‘This might be the last time you see me alive.’

These are all the sorts of powerful lines that could have been uttered by his character Vasyl Petrovych Holoborodko in the TV series Servant of the People, which ended in 2019, where his character, a teacher, became the president after a rant he made about corruption went viral after being posted on the internet by his students. 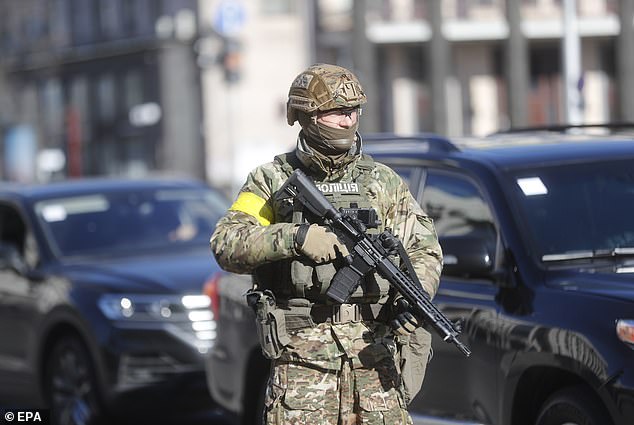 As politicians around the world, from Sleepy Joe Biden to Mr Blackface Authoritarian Justin Trudeau, become more of a joke AFTER they take office, Zelensky has morphed from comedian to statesman over the course of just a few weeks.

Moore has spent the crisis talking about gay rights for some unknown reason, unfathomably tweeting: ‘With the tragedy and destruction unfolding so distressingly in Ukraine, we should remember the values and hard won freedoms that distinguish us from Putin, none more than LGBT+ rights.’

WTAF? No wonder Putin and China’s Jinping continue to treat us with such disdain.

But in hardman Zelensky – dressed in his green military fatigues, showing off a body once toned on Dancing With The Stars – Putin has encountered a far tougher opponent.

His authenticity and ability to speak directly to Russians in their language has convinced many to support his cause, helping lead to large illegal anti-war protests on the streets of Moscow and St Petersburg. 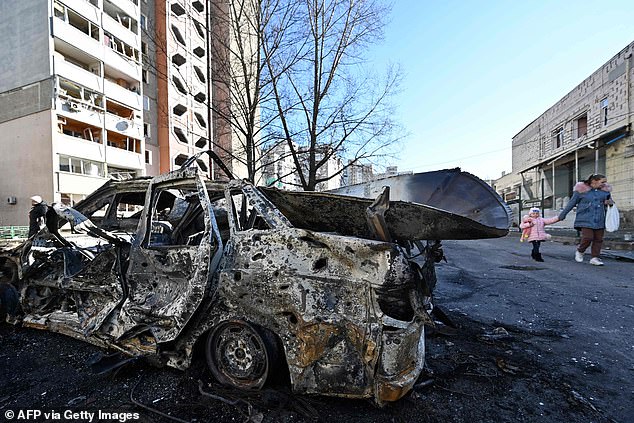 Zelensky’s personal story has also helped repudiate Putin’s propaganda campaign that the first illegal invasion of a sovereign country by a superpower in 80 years is all down to ridding Ukraine of Nazis.

He is from a Jewish family and his grandfather Semyon Ivanovych was the only one of his four brothers to survive the Holocaust, with the others all killed by Nazis.

As an incredulous Zelensky has pointed out: ‘How can I be a Nazi? Explain it to my grandfather, who went through the entire war in the infantry of the Soviet army and died a colonel in an independent Ukraine.’

Zelensky – most famous before the war for starring in that infamous phone call with Donald Trump that resulted in the US president’s political impeachment in the house – had been down in the polls before Putin decided to go to war with Ukraine, having been unable to stamp out the country’s rampant corruption as promised.

His close relationship with the billionaire oligarch Ihor Kolomoyskyi raised eyebrows and critics believe he surrounded himself with too many pro-Russian, anti-Western advisers who may have wrongly convinced him that war could be averted, despite intelligence from the UK and US to the contrary.

But none of that matters now.

Leaders are judged by history on their actions in wartime.

And Zelensky’s approach has been highly effective, garnering tougher sanctions, more military supplies and piling the pressure on the West to man the hell up and stop appeasing Putin.

His history-making news clips posted directly to social media have seen his followers soar, with over three million on Twitter and 12 million on Instagram. 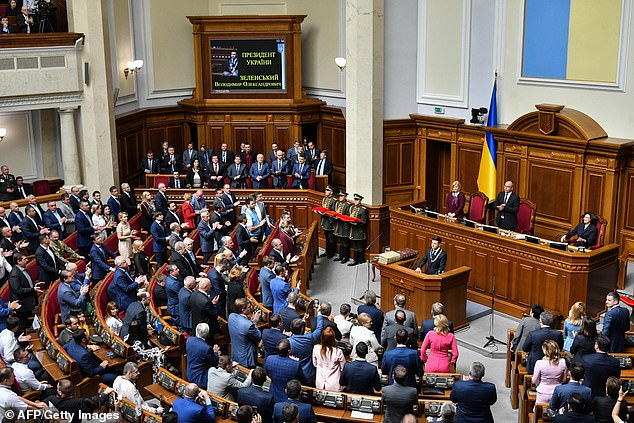 Volodymyr Zelensky gives a speech as he takes the oath of office during his inauguration ceremony at the parliament in Kyiv on May 20, 2019

Like Donald Trump before him, he has the authenticity so lacking in our modern-day politicians, who seem to have become paranoid, scripted robots.

Biden couldn’t even get through a press conference on the conflict without breaking into inappropriate smirks, for God’s sake.

Zelensky is rightly now a global hero, but whether he survives the war is impossible to predict, given Putin – who runs a well-oiled international killing machine – wants him dead.

Perhaps what’s most heart-warming is that Zelensky never needed to enter politics; he had national superstardom, millions in the bank, luxury villas and a highly successful career in Russia, until he donated money to help support the Ukrainian army in 2014.

Zelensky once said: ‘You don’t need experience to be president. You just need to be a decent human being.’

And it’s that innate decency which is why he’d rather die alongside his citizens in Kyiv than cut and run on a US helicopter.

I pray that this inspirational figure can lead Ukraine out of this quagmire – the world will be a better place for it.