The magical railway that took 63 years to arrive! Dedicated hobbyist finally completes detailed model of busy market town… after starting the project in 1959

With its bustling market town, charming villages and bucolic scenes, it takes you on a journey into the half-forgotten age of the horse and steam engine.

Welcome to the imaginary landscape of Amberdale and the railway and rivers which run through it. Set in the 1890s, retired engineer Philip Harvey has finally finished creating it — 63 years after he began.

He started making it in 1959, squeezed into the caravan he lived in while working as a site engineer. In 1966, after marrying Caroline and moving into a house, he was ‘allowed to put the model in a room of its own’, he said.

‘Then, 25 years ago, we moved into our current house and converted the garage into a room for it. I’m lucky as I don’t have to put it away every time I’ve finished with it.’

The 27ft long model curves around the 14ft by 10ft room in their North Yorkshire home.

Ambleden, the market town, is at the end of the railway line. From there, the line crosses a canal and then a viaduct, before running into the village of Broad Hambury, with its pub, the White Swan, church, forge, village shop and thatched cottages.

The railway then winds through the countryside, skirts a colliery and enters Wenly, an industrial town of mills, trams and terraced houses. All the locations are imaginary. 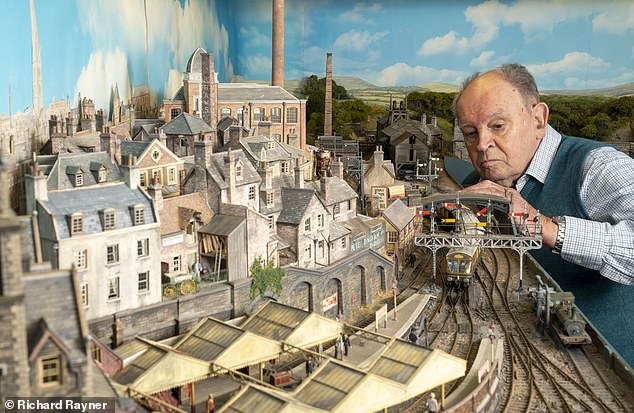 A lifetime’s work: Philip, 83, makes adjustments to the project he has been working on lovingly for 63 years 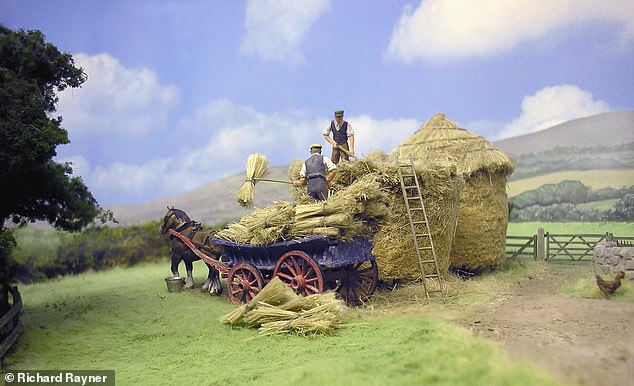 Shortest straw: It’s harvest time in Amberdale for figures the size of a thumbnail 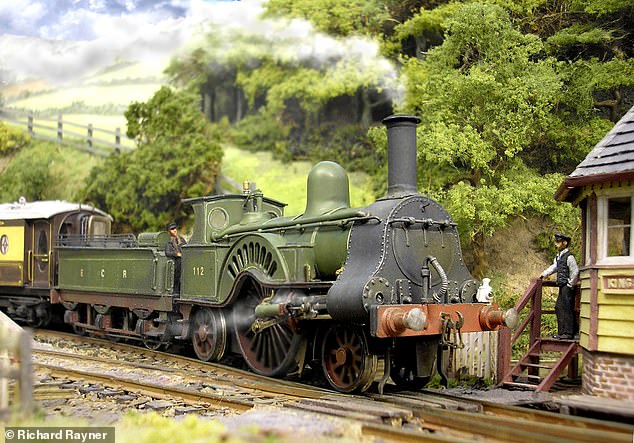 How choo you do that? Philip uses photo tricks to add steam to his book’s photos 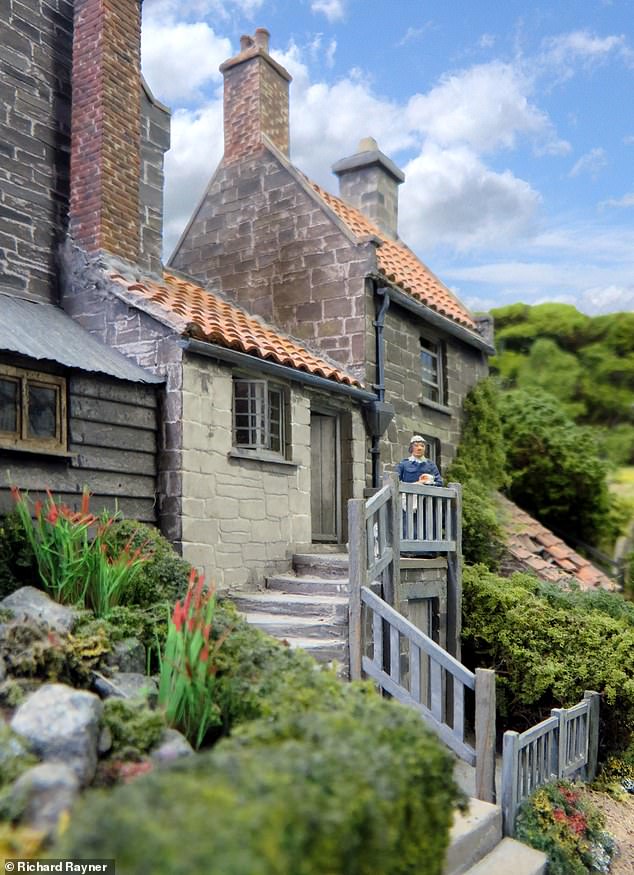 Step up in the world: Proud owner takes in the view from her riverside cottage 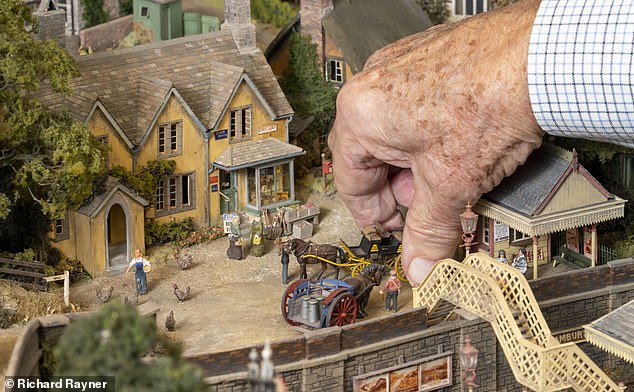 The model is built to a scale of 4mm to 1ft, making ‘a man about as high as your thumb nail is long’, says 83-year-old Mr Harvey, who went on in his career to be responsible for the modernisation of Tower Bridge and the manufacture and installation of the floodgates on the Thames Barrier.

In a book he has authored about the model, Mr Harvey writes: ‘Amberdale is inspired by my affectionate memories of the railways I once knew and loved and is convincing enough to me to conjure up a little of the atmosphere, wonder and excitement I was lucky enough to enjoy all those years ago.’

He grew up in Devon and has fond memories of ‘riding to school in a trap, the horse walking, never trotting, through the streets of Ottery St Mary,’ and of the train journeys he made in his youth. 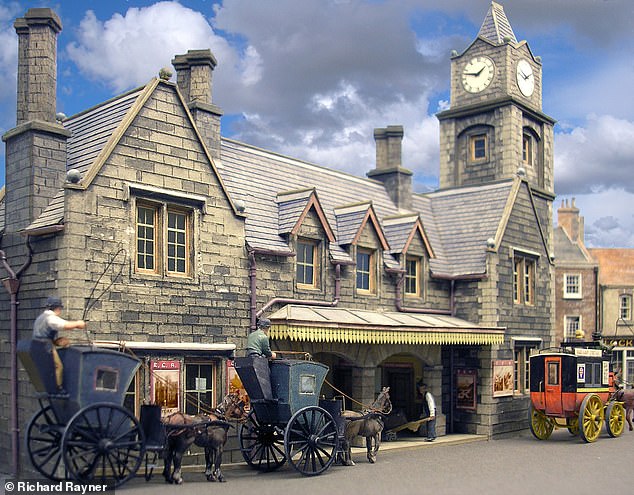 Where there’s a mill: Cabs at the railway station in the industrial town of Wenly 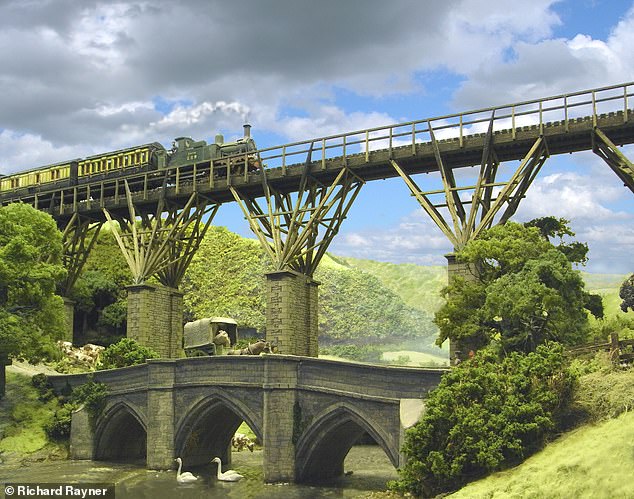 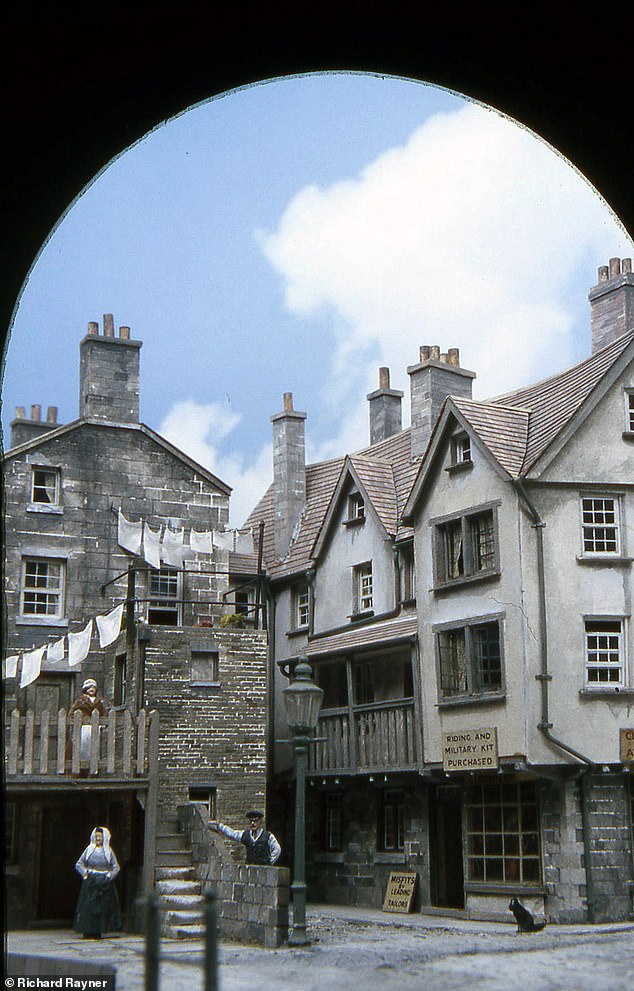 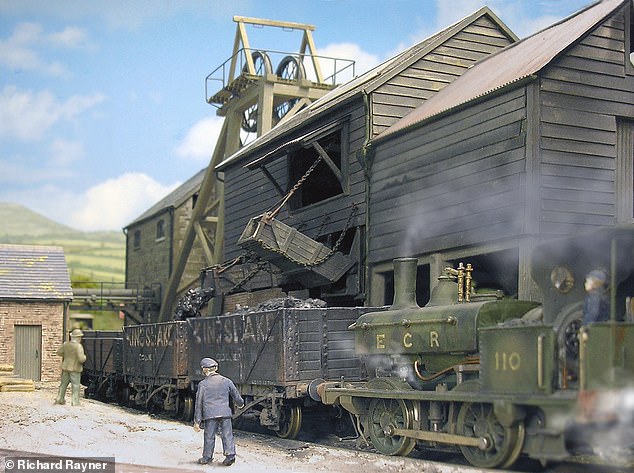 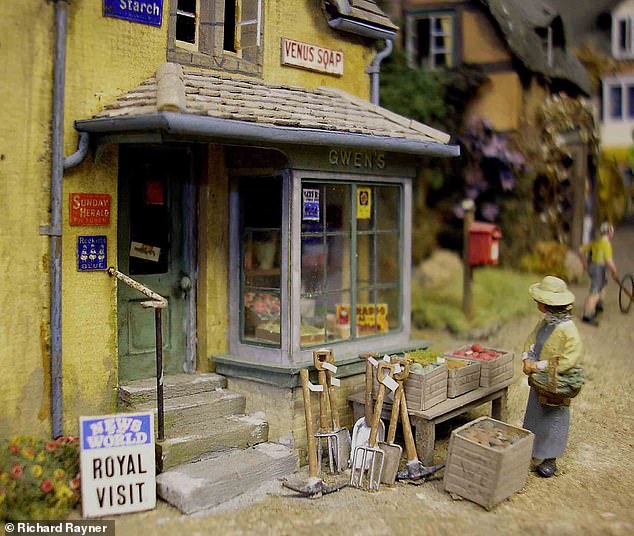 Is Queen Victoria planning a trip to Amberdale? Gwen’s village shop has all the latest news

‘Long, sunny, summer holiday days with bikes, shorts and sandwiches, beside and in the river, looking up as the trains passed by,’ he also recalls in his book, Amberdale And The Railway Which Runs Through It. ‘We put pennies on the line but were chased off by the nearby crossing keeper.’

When he began the project, he decided to set Amberdale in the 1890s, ‘before the motor car changed everything’. With the help of his wife, a retired floristry teacher, he carefully researched the period from books and photographs, but does not claim 100 per cent historical accuracy.

‘The message I’m preaching is that, with imagination and enthusiasm, this is a pastime open to anyone. It doesn’t have to be perfect, it can be just how you’d like it to be.’