Dunkin’ has brought back its Girl Scout Cookie coffee flavors, but this time the chain has bottled it up for retail shelves.

The quick-service chain partnered with The Coca-Cola Company to launch its three new ready-to-drink iced coffees, which include signature flavoring from Thin Mints, Coconut Caramel and S’mores, Dunkin’ announced Tuesday.

Coca-Cola is producing and distributing the 13.7-ounce bottles to retail stores throughout the country, as it has for the rest of Dunkin’s bottled coffee lineup since 2017. 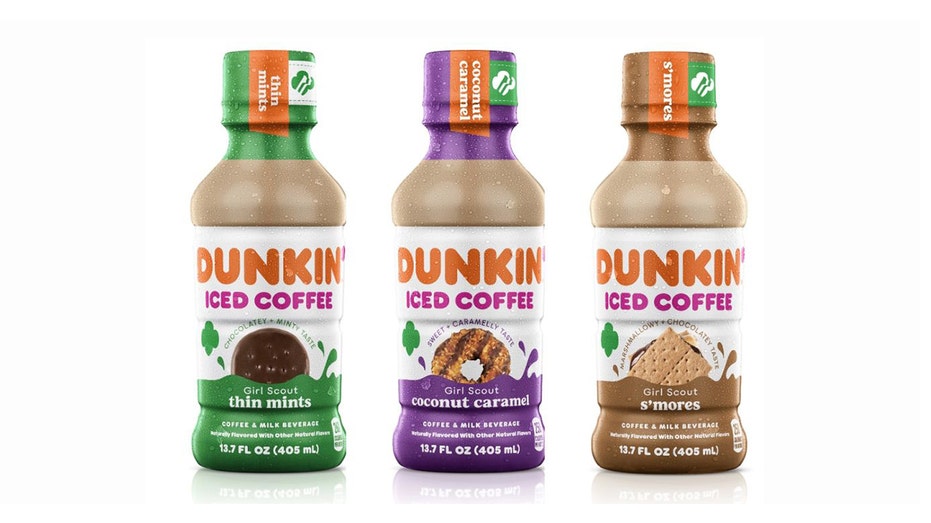 Dunkin’ has brought back its Girl Scout Cookie coffee flavors, but this time the chain has bottled it up for retail shelves with help from The Coca-Cola Company. (Dunkin’)

From 2018 to 2020, Dunkin’ had been serving Girl Scout Cookie coffees in-store during the youth organization’s cookie-selling season, which typically takes place between January and April. However, this year it appears Dunkin’s cookie-flavored beverages have not made a reappearance on store menus.

GIRL SCOUT COOKIES AND WHAT TO KNOW ABOUT THE $800M BUSINESS

Thin Mints and Coconut Caramel are the two Girl Scout Cookie flavors that Dunkin’ has brought back each year. In 2018, the chain included a Peanut Butter Cookie flavor in its lineup, but the option has yet to make a return.

Dunkin’s addition of the new S’mores flavor is the first time the chain has offered a trio of Girl Scout Cookie flavors since the idea's debut.

The bottled coffees can be purchased at major grocery stores, supermarkets and drug stores, including ShopRite, H-E-B and CVS Pharmacy. Shoppers who drink the ready-made coffee beverages can expect to consume 250 to 260 calories per bottle.

“We’re excited to join forces with Dunkin’,” Chief Revenue Officer Barry Horowitz, of the Girl Scouts of the USA, said in a statement. “Girl Scout Cookies are the vehicle for girls to learn important entrepreneurship and leadership skills that set them up for success in life, and our licensed products help carry that message across the country.”

Girl Scouts of the USA makes hundreds of millions of dollars from licensing deals with food and lifestyle brands. In 2015, the organization made more than $225 million from licensed merchandise items that were sold in retail stores, according to a press release.

Meanwhile, the global ready-to-drink coffee market is projected to grow to $42.36 billion by 2027, according to market research firm Fortune Business Insights. This estimate is nearly double what the firm claims the market was valued at in 2019, which was $22.44 billion.

“The popularity of ‘café culture’ has brought ready-to-drink coffee to the center stage of the global marketplace,” Fortune Business Insights wrote in its forecast. “Global brands are eyeing this lucrative space amidst consumers shunning carbonated beverages and energy drinks for on-the-go and highly convenient coffee [beverages.]”