We’ve had the “controversial” first press release, the instant community backlash, the alleged breaches of COVID health and safety protocols by its cast of influencers. Now, finally, we have the first glimpse of Byron Baes itself.

So, was all that fuss justified? Well, judging by the trailer, kinda.

What is Byron Baes?
It’s Netflix’s first Australian reality series, about a bunch of influencers – largely, but not exclusively, social media entrepreneurs – in Byron Bay. It was inspired by an article in Vanity Fair in July 2019 about the “surfing mamas” of the area, though none of them feature in the show. 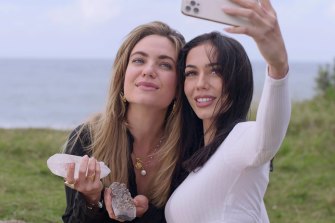 So, who is in it?
It has a core cast of 13, including one couple, who are all young (or youngish), good-looking, and seemingly obsessed with a curated image of themselves and the life they live.

Two of them are “blow-ins”, outsiders who have relocated from the Gold Coast, and at least some of the drama appears to derive from their efforts to fit in. The rest are ostensibly locals, though in a town that is a magnet for people from all over the country – indeed, the world – that is a loose term indeed.

Have I heard of any of these so-called influencers?
If you watch reality TV you may have seen Nathan Favro – seemingly a local but in truth from Sydney via the Gold Coast (he is a part owner of pizza restaurant Toro’s in Palm Beach) – on The Bachelorette in 2018 and Bachelor in Paradise in 2019. You may have seen model Elias Chigros (aka Elias Black, and originally from Melbourne) on the first season of Love Island Australia in 2018 (he also popped up on The Block the same year, pretending to be a milkman). 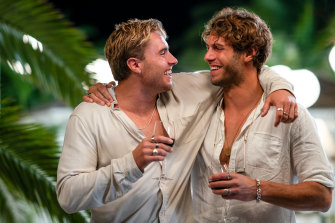 If you spend a lot of time on Instagram, you may have seen Jade Kevin Foster, who has 1.2 million followers; here he is cast as one of two blow-ins.

The other is Sarah St James, a musician of Seselwa heritage (her mother is from the Seychelle Islands) who records as St James. Though she calls the Gold Coast home, she was formerly half of the Melbourne-based duo Elle, and is not to be confused with fellow musician Sarah Saint James, who grew up in a strict Christian family in South Australia and is most assuredly not in this show.

“Spiritual healer” (aka fire twirler) Simba Ali is another escapee from Melbourne, where he used to live the corporate life and was called Sim Khaira. He teaches the lizard walk and says the secret of “becoming a healthy and high performing physical specimen” has something to do with “comprehensively flossing and nourishing our bodies”. OK. 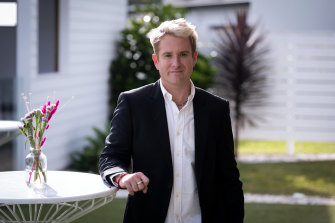 Formerly an assistant to Kyle Sandilands, Alex Reid is now a director of a couple of brand marketing companies.Credit:Netflix

Alex Reid used to be Kyle Sandilands’ personal assistant and is now a director of two companies in the social media brand influencer space, Amplify and The Traction Agency. In 2018, he was on Seven’s singing show All Together Now. He calls Sydney home and says in the trailer that while he’s surrounded by crystals in his new Byron Bay office, they don’t seem to be working. “I’m still single, still poor.”

Saskia Wotton, who features with her partner Dave Frim, moved to Byron from Brisbane about five years ago. Frim, originally from Sydney, has been there for a decade.

Those with more established roots include Cai Leplaw, a photographer and model who lives in Mullumbimby; Hannah Brauer, whose parents set up the homewares brand Bisque Traders in 2000; fellow fashion designer Jessica Johansen-Bell and her sister Lauren, a model.

It’s not clear how long Elle Watson, who describes herself on her one-screen website as a “socially and environmentally conscious woman in business”, has lived in the area, but presumably long enough to become an embodiment of “dualism guided by both passion and strategy”. Whatever that means.

Hasn’t there been some kind of fuss about this show?
The first the world knew of Byron Baes was when Netflix put out a Jane Austen-inspired press release in April 2021.

“It is a truth universally acknowledged that an influencer in possession of a good follower count must be in want of a beach backdrop,” it began, before ending with the observation that “beneath every perfect post is a very real desire not just for ‘likes’ but to be liked”. 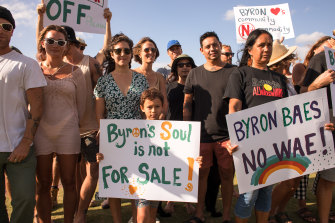 The backlash was swift and furious, with Netflix accused of exploiting a town that has serious social issues – income inequality, an acute shortage of affordable housing, substance abuse, an at-risk environment – as a pretty backdrop for a vacuous show about the image-obsessed.

Que Minh Luu, the streamer’s newly appointed director of local originals, was soon trying to distance herself from that impression.

“It was not a great press release because it didn’t really give the entire story of what the show is,” she told local radio station Bay FM in May 2021. But, she added, “here’s the thing, no one actually knows what the show is about because all we have is the press release”.

But now we have a bit more to go on, right?
As of this week we have the confirmed cast list, a bunch of images, and a trailer. And it looks like that press release was pretty much bang on the money.

So, will it be any good?
With the added ingredient of a whole lot of cliquiness, summed up by St James saying “I feel like I’m in high school”, a bit of MAFS-style pouty partnering, and that stunning scenery, Netflix could be on a winner.

Byron Baes looks thoroughly trashy and addictive, the kind of show you can’t help but watch even when you know you probably shouldn’t.