A deputy from Sarasota, Florida, has been placed on administrative leave after surveillance video showed him grabbing a Black teenager by the throat during a confrontation at the Sarasota County Juvenile Assessment Center on September 1. The teen, 17-year-old Terrance Devon Reed III, was injured during the interaction and was transported to Sarasota Memorial Hospital.

The video, provided by the Sarasota County Sheriff’s Office, shows Reed sitting on a bench in the corner of a room with his arms tucked into his shirt. There is no audio in the video, but Reed appeared to be exchanging words with Deputy Neil Pizzo, who is seen speaking to Reed.

Pizzo then walked over to Reed, who stood up with his hands by his sides. Pizzo then grabbed him by the throat and pushed him against the wall. Reed tried to push him off, but was dragged to the floor as another officer entered the room. Pizzo repeatedly hit Reed as he and the other officer held him down and handcuffed him. 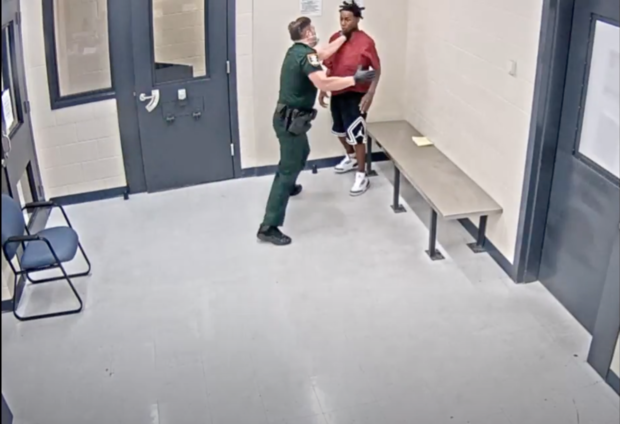 In an incident report, Pizzo wrote that Reed took part in a photo lineup at the facility, and while doing so, had his hands in his pants and boxer shorts. Reed removed his hands when asked to, but threatened to kill Pizzo and used racial slurs, the officer wrote. While sitting on the bench, Reed put his arms in his shirt, allegedly telling Pizzo that he was cold. Pizzo said he repeatedly told him to remove his hands, which he described as “a common practice of Deputies to assure no one is attempting to harm himself or other around them.”

His failure to comply is what led to him walking towards Reed, Pizzo said.

“As I approached he jumped up from the bench. Mr. Reed quickly pulled his arms out of his shirt and said ‘I’ll f*** you up.’ I saw the the look in his eyes and the stance that he immediately went into. Mr. Reed had his fists clenched and it was eminent I was going to be attacked and struck,” Pizzo wrote. “I immediately stepped back from the potential strike and was able to close the distance between us. I was forced to step in and defend myself and the other persons within the room.”

The report said Reed was transported to the hospital for an abrasion on his head. It also said Reed had a sprain, but did not clarify where.

Reed had been arrested for drug charges, probation violation and other counts, according to documents provided by the Sheriff’s office.

Sarasota Sheriff Tom Knight told The Associated Press he was “disappointed” in what he saw on the video and said the lack of de-escalation techniques was concerning.

“If a deputy is trying to de-escalate and you go hands on and you have a confrontation, what did he attempt to do prior to the physical confrontation to prevent it from happening?” Knight told the AP.