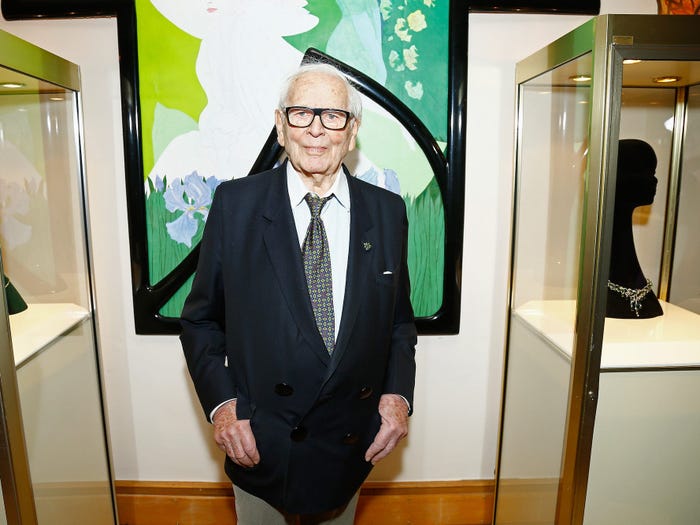 Pierre Cardin has died at the age of 98.

The French fashion designer died at a hospital in Neuilly, a commune in the west of Paris on Tuesday, December 29, his family told AFP News.

"It is a day of great sadness for all our family. Pierre Cardin is no more," the family said in a statement obtained by the publication. "We are all proud of his tenacious ambition and the daring he has shown throughout his life."

France's Fine Arts Academy, of which Cardin was a member since 1992, also shared the news.

"The Perpetual Secretary, Laurent Petitgirard, and the members of the Academy of Fine Arts are very sad to announce the death of their colleague Pierre Cardin," a spokesperson for the organization said in a statement cited by the Express.

The cause of his death is not yet known, according to the Express.

Cardin was born in 1922 near Venice, Italy, according to a timeline of the designer's life on his official website, and his family emigrated to Saint-Etienne, France, when he was 2.

He began his career in fashion when he moved to Paris in 1945, working for Paquin and Schiaparelli before being hired as a tailor by Christian Dior in 1946.

In 1950, Cardin launched his own company, initially designing theater costumes, before he went on to create the "bubble dress" in 1954. A decade later, the designer debuted his distinctive Space Age collection, a line of futurist designs that made a statement in the fashion world.

Over the course of his more than 70-year career, Cardin was a pioneer in his field.

As the BBC points out, the designer was one of the first to launch ready-to-wear collections, making high fashion more accessible to the general public. Over the years, Cardin also launched a range of products bearing his name, including fragrances, creating what AFP calls "the first truly global fashion empire."

After news of his death broke, Cardin's official Instagram account shared a photo with a quote from the  late designer: "I have always worked in my own style, which is different from all others. It was always my intention to be different, because that is the only way to last."

Representatives for Pierre Cardin did not immediately respond to Insider's request for comment.