More than three decades before David Hua joined SBS’s leadership team, taking over as director of audio and language content last December, he found the multicultural broadcaster to be a daily source of annoyance.

“As a small child, I was very active and I just wanted to play with my parents,” says the veteran media executive, who spent 15 years in various roles at the ABC. “But at 3 o’clock every afternoon, they would stop to listen to the Vietnamese news on SBS Radio, which was a real frustration to me.” 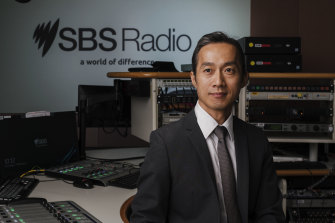 Born in Vietnam, Hua and his family came to Australia via Hong Kong as refugees, living in the small NSW town of Temora before settling in Sydney. Thanks to his father’s Chinese heritage, Hua is fluent in Mandarin and Cantonese as well as English and Vietnamese. As he matured, he became an ardent listener of SBS Radio – which he is now in charge of.

Hua is also overseeing the launch of SBS Chinese, a new digital offering that incorporates and builds upon SBS’s existing Mandarin and Cantonese language services. (The sbs.com.au/chinese website goes live on Friday, to coincide with the start of the Lunar New Year.) Supported by an additional $2 million in annual funding, it features a mix of written articles, audio and short-form video, with content spanning breaking news and COVID-19 updates, to profiles and stories about food.

Australia is home to more than 1.2 million people with Chinese ancestry, including more than 500,000 born in China. Naturally, SBS Chinese is aimed at these audiences – but much of its content will be translated from Mandarin and Cantonese into English and other languages.

Hua agrees with the assessment of former prime minister Kevin Rudd, who in 2008 described the rise of China as among the biggest stories of this century.

“We want to help the general population understand the relationship between Australia and China,” Hua says.

“We want to create a better understanding of Chinese ways of thinking; of Chinese cultures and languages and humour. When I say that I want to increase Australia’s Chinese literacy, it’s not just about language, it’s about understanding a certain sensibility.”

When SBS Radio began broadcasting in 1975, initially on a three-month licence, its explicit aim was to inform various ethnic communities about the launch of the Medibank universal healthcare scheme. Four-and-a-half decades later, SBS’s suite of radio, television and online platforms plays a vital role in disseminating COVID-19 news and vaccination updates in almost 70 languages (with Auslan soon to be added to the mix).

Hua nominates a recent series of reports by SBS’s Punjabi team as the kind of journalism he’d like to see more of. In a year-long investigation, reporters found that some imported foods – including wheat, rice and baby products – contained alarming levels of banned substances and were unfit for human consumption. These stories were then translated from Punjabi into English and other languages and published across various television, radio and online platforms.

“It actually changed the way that spices are labelled in this country, which protects the health of all Australians,” Hua says.

He believes the success of SBS Chinese depends on its ability to earn audiences’ trust: “We consulted with many communities, including Chinese communities, and some were scratching their heads and saying, ‘You get money from the government – so how come the government can’t tell you what to do?’ And they came away feeling enlivened by the fact that Australia, as a vibrant democracy, has invested in an institution like SBS.

“I saw how precious SBS was to my family and I want it to be just as precious to all the diverse language consumers in this country.“