The Victorian government has weeks to decide whether it will abandon this year’s Formula One grand prix.

The Australian Grand Prix Corporation has presented a COVID-safe plan to the government, arguing the event can be run safely for crowds and the community at large, with racing teams operating in a bubble. 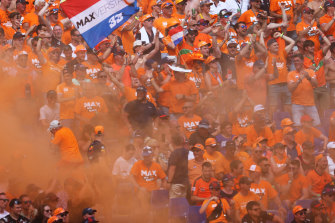 Fans of the Dutch-Belgian driver Max Verstappen at the Austrian grand prix on Saturday.Credit:Getty Images

Chances of the multimillion-dollar event proceeding as planned from November 18 to 21 seemed less politically feasible on Friday, when Prime Minister Scott Morrison announced a new national coronavirus plan that will slash international flight numbers in half from July 14.

But flights for the grand prix would probably be exempted from these caps if the event went ahead.

State cabinet has not made a decision about whether the event will proceed, although it must be made by the end of this month at the latest so that the nine-week set-up process can begin in September and businesses working with the event can put plans in place.

After its cancellation in 2020, Melbourne’s grand prix was moved this year from its usual March date to November. If it is to run this year, physical preparations at Albert Park would need to begin within eight weeks and contracts with hundreds of suppliers be signed almost immediately.

Cindy McLeish, the state opposition’s deputy leader and major events spokeswoman, said it was “going to be really difficult to pull [the grand prix] off” this year.

“I want us to be able to host it, but I just don’t know if we will be able to,” Ms McLeish said.

Failing to run the race again this year could mean losing the event when the state’s contract expires in 2025, she said.

The debate over whether this year’s race should proceed came as Victoria recorded zero new locally acquired coronavirus cases on Sunday, NSW 16 new cases, Queensland two and Western Australia one.

Victorian Health Minister Martin Foley said health officials would decide if masks would still need to be worn in offices after this week, following the state’s run of four days with zero local cases.

NSW Premier Gladys Berejiklian said that no decision had yet been made about whether to end Sydney’s two-week lockdown on Friday as scheduled. 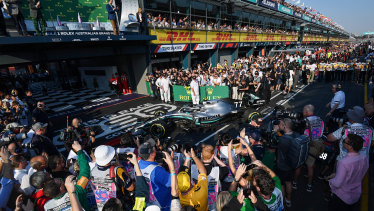 Facilities at Melbourne’s grand prix, such as those pictured here at the 2019 event, take at least nine weeks to set up.Credit:Joe Armao

A spokeswoman for Victorian Major Events Minister Martin Pakula said the government was continuing to talk to the Grand Prix Corporation and other parties. “[We] will have more to say in due course,” she said.

Australian Grand Prix Corporation spokesman Haydn Lane said the organisation was continuing to work closely with the state government and Formula One management “on the complexities, conditions and arrangements” for the event. “Further detail will be provided upon finalisation with all parties,” he said.

While the Grand Prix Corporation has submitted a COVID-safe plan to the government on how it would manage local crowds, the major issue under debate in cabinet will be how international teams coming in from overseas would be dealt with if the event proceeds.

Conditions that could be placed on racing teams include a necessity for them to be vaccinated, that they undergo repeated testing in Australia, and that they operate in a bubble while in Melbourne.

Racing teams will not be willing to undergo lengthy quarantine, such as the fortnight tennis players did ahead of this year’s Australian Open, as they would miss races in other countries – if those events go ahead. Several races have already been shifted this year, with Austria hosting two events in the past two weeks.

The Formula One event immediately preceding Australia’s grand prix is Brazil’s race in Sao Paulo, on November 7, making a 14-day quarantine period impossible. Brazil has recorded more than 18 million coronavirus cases and more than half a million deaths, meaning that race is far from certain to go ahead.

Last year’s event in Melbourne was cancelled on March 13, just two days before the final race was to be run. A state of emergency was declared in Victoria under the Public Health and Wellbeing Act on March 16 and has been in place ever since.

Port Phillip mayor Louise Crawford said on Sunday that her council would welcome the economic benefits to traders if the race went ahead but appreciated “the difficulties of organising and holding major events at this time due to COVID-19 considerations including safety and logistics”.