Produced by Ryan Murphy, king of glossy, camp drama – and now streaming dramas, with his $300 million Netflix deal – this tale of the rise and inevitable fall of US fashion designer Roy Halston Frowick (who insisted on being known only as Halston, taking the concept of branding to new heights) should be incredible. 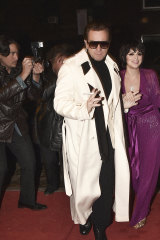 Ewan McGregor as Halston and Krysta Rodriguez as Liza Minnelli.Credit:Netflix

But despite Murphy’s usual attention to period detail with eye-candy locations and production design, the writing (by playwright Sharr White, and based on Steven Gaines’s biography Simply Halston,) falls flat, skimming that fabulous surface, leaving you wanting. Halston is a limited series of five episodes but it somehow feels both too short and too long; the designer’s behaviour and ambition, the series hints, stems from his unhappy childhood, but we’re given just one flashback of this, and an offhand remark that his love of millinery came from “lifting his mother’s spirits”. In a later episode when he’s designing a perfume, there’s a chance to explore his backstory, but again, we’re given only hints as to what shaped him.

Travelling the classic route of re-inventing himself and moving to New York after a stint working as a milliner in Chicago, Halston landed a job as a milliner at department store Bergdorf Goodman and his break came when Jackie Kennedy wore one his pillbox hats to the 1961 presidential inauguration; this is where the series opens, as he becomes an in-demand designer overnight.

The first episode powers through into his expansion into couture fashion (out of necessity as American women stop wearing hats) as he assembles a coterie of colleagues – poster and fashion illustrator Joe Eula (David Pittu), model and jeweller Elsa Peretti (Rebecca Dayan), who became one of Tiffany’s top designers and, briefly, Joel Schumacher (a disappointingly brief turn from Rory Culkin) who worked in the industry before he became a director – and charming society women into financing his atelier. 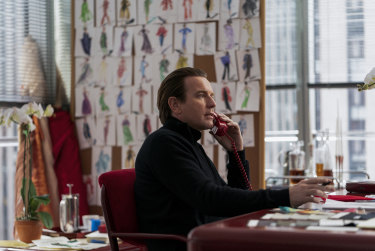 Ewan McGregor as Halston, one of America’s most influential fashion designers.Credit:Netflix

His next big break comes when he uses the fabric ultrasuede for a shirtdress that became a blockbuster and before long he’s a household name, creating both ready-to-wear dresses for everyday women and couture creations for everyone from Anjelica Huston to Elizabeth Taylor, his look helping to define ’70s disco era, particularly his iconic halter-neck dress.

The fashion show montages and the debauched party scenes are slick and fun, but as Halston’s addiction spirals out of control and he alienates all his friends, his lack of inner life makes it hard to elicit any sympathy. Even within what is portrayed as his closest friendship, with Minnelli, this version of Halston never really opens up.

His only long-term lover is Victor Hugo (Gian Franco Rodriguez), a male escort who essentially never goes home and ends up working for Halston (and later Warhol’s Factory) but ultimately betrays him by sending compromising photos to the media. Both Victor and Halston would go on to die of AIDS-related illnesses, another aspect of his life that isn’t given the gravity one would expect.

By the time Halston has been persuaded to sell out his name to everything from a line of luggage to carpet while still demanding his financiers understand his genius (and his cocaine and orchid habits), and then ultimately loses his own brand, it’s hard not to start rooting for the boring corporate moneymen rather than the artistic vision of one of fashion’s greatest designers.

Find out the next TV shows, streaming series and movies to add to your must-sees. Sign up to get it every Thursday.