In this round-up our reviewers critique movies released this week: from big blockbuster to local, foreign and sometimes obscure films that deserve the spotlight. Which ones are worth the cost of a ticket?

Written and directed by British actor Adewale Akinnuoye-Agbaje, and based on his childhood, Farming is at times so confronting our reviewer Paul Byrnes says it "stretches the credibility to breaking point – until you realise it's autobiographical". In the film, main character Enitan (Damson Idris) is one of the thousands of Nigerian children farmed out to white families in the UK between the 1960s and 1980s in the hope of giving them a brighter future. But in a case of keeping his enemies close, Enitan eventually joins a violent skinhead gang. 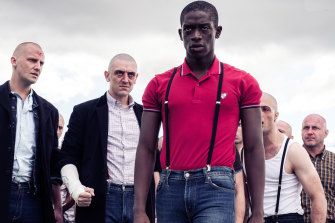 Life outside the house is a battlefield for Eni, played as a young man by Damson Idris.

"This modern British tale, Dickensian in its horror, stretches credibility to breaking point – until you realise it's autobiographical. Then the truth sinks in: someone really did live through this. They could have called it Hate, Actually.

"The premise is like a Daily Mail headline: black man joins skinhead group in mean streets of Tilbury. Shane Meadows already did that in This Is England, where the skins included a chubby kid of colour, but those were cream puffs in comparison. The Tilbury Skins are the real thing – led by the charismatic Levi (John Dagleish), who loves hurting people and manipulating his small group of thick-as-a-brick psychos. A double bill with Romper Stomper would leave you sleepless for days."

Truth is stranger than fiction when it comes to the story of the real-life Fisherman's Friends, a group of Cornish fishermen whose efforts singing traditional sea shanties led to them landing a life-changing record deal with Universal Music in 2010. Fisherman's Friends, the movie, is based on these true events and portrays a heartwarming success story – but our reviewer Sandra Hall isn't convinced it's fit for the big screen.

"Modesty may well be British cinema's most successful export. It's spawned a genre. Its heroes are unassuming people who get together for a good cause and end up becoming famous, having charmed all those who can relate to a story about lovable underdogs coming out on top. 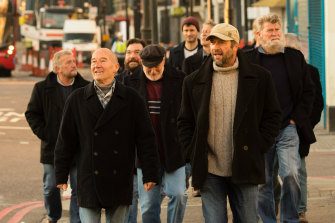 Fish(ermen) out of water: the buoy band goes to London.Credit:Roadshow

"The latest example, Fisherman's Friends, happens to be drawn from life – with the usual fictional flourishes added to spice up the characters and tidy up the storyline. We're used to that. Moviemakers don't have much time for lives that can't be neatly divided into three acts and reality rarely obliges. In this case, however, truth really is stranger than fiction for the basic facts of the story are harder to believe than the made-up bits.

"It's a cheering success story highlighting the homely pleasures and eccentricities of English village life. The pub is the place's social hub and it's staffed and patronised by familiar TV faces – but that's the problem. A score full of venerable sea shanties isn't really enough to raise it above the level of a television sitcom."

Suzi Quatro was a true disruptor when she entered the rock scene in the early '70s, loudly and proudly claiming her space in what was then very much a man's world. Taking on the instruments, lead vocals and leadership of her band, and becoming an icon in the halcyon days of rock'n'roll, Quatro did it all. This feature-length documentary looks at her life, and impact, in detail. 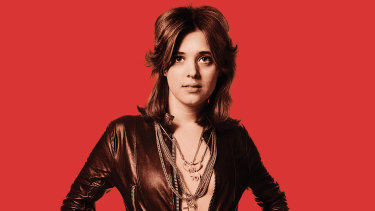 “We thought she was bad to the bone, so it’s a surprise to learn that the real Susan Kay Quatro was a good Catholic girl from a musical family,” writes Paul Byrnes.

"We thought she was bad to the bone, so it's a surprise to learn that the real Susan Kay Quatro – for that is her real name – was a good Catholic girl from a musical family in Detroit; someone who believed in hard work, fidelity and clean living. She is so far from her image that you wonder where the bad girl thing came from. Melbourne filmmaker Liam Firmager asks the same question in this excellent Australian documentary, the first to try to explain her longevity and place in rock history.

"Firmager is clever about structure here, holding back her songs, then letting them rip in a way that reminds us of the impact she had at the time – especially in Australia, more than in other countries. She had hits here when her songs were barely charting in the United States. It's fitting then that a skilful and sensitive Australian production is the first to recognise her achievements."

Keira Knightley stars in this docudrama about Katharine Gun, a translator who worked for British intelligence agency Government Communications Headquarters and in 2003 leaked a secret memo about an illegal spying operation ordered by the US. Describing the film as unusually accurate, reviewer Paul Byrnes says "movies have never been great at history" but with this Gavin Hood-directed film, "they may be getting better".

"It is 2003 and prime minister Tony Blair and US president George W. Bush are pushing for a war against Saddam Hussein. They want the United Nations Security Council to back the invasion plan, allowing both countries to declare it legal but the votes of the temporary members of the Security Council are not solid. 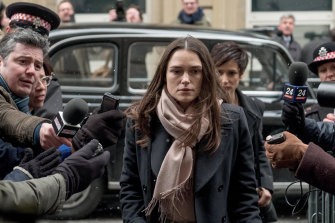 "A memo crosses Gun's monitor. She is appalled by its implications: the US is asking Britain to spy on third countries, in order to justify a war for which there is no legal basis. She wonders what to do about it.

"She leaks the memo to a former colleague, who sends it on to a political activist. The activist passes it to Martin Bright (Matt Smith), a reporter at The Observer. Rhys Ifans gives us the film's most colourful character as Ed Vulliamy, the paper's fiery and expletive-laden Washington correspondent, who's frustrated that his own newspape's support for the war is compromising its journalism. Ralph Fiennes joins the fight when Scotland Yard charges Gun with breaching the Official Secrets Act, nine months after The Observer finally breaks the story.

"Timely does not begin to describe this film: when governments lie to us about the causes of war, when the press lies down with the dogs of war, when intelligence agencies no longer dare to speak truth to power, we need stories that stand up for the truth, even when it's hard to find. The whistleblower may just be the new superhero of our culture, without need for cape or gun."

Described by Melbourne International Film Festival as a "delightfully offbeat feminist update" of the traditional puppet show Punch and Judy, this film follows husband-and-wife team Judy (Mia Wasikowska) and Punch (Damon Herriman) as they work hard to keep their puppet show alive in their gloomy town. When a drinking problem descends on one half of the pair, chaos ensues. 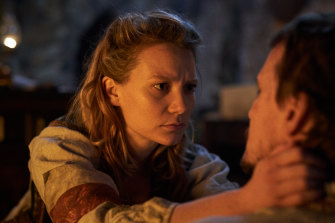 "Australian writer-director Mirrah Foulkes shakes up this notoriously misogynistic classic in a manner that gives Punch his just deserts while at the same time taking a swipe at the evils of bigotry and prurience. She's made a satirical fable out of Punch and Judy's turbulent partnership, shooting the story amid the medieval-style buildings of Montsalvat, the artists' colony in Victoria.

"Punch, played by Herriman (fresh from his turn as Charles Manson in Tarantino's Once Upon a Time in Hollywood) is front of house, spruiking the show's attractions – and his own – while Wasikowska's Judy modestly remains backstage, pulling the strings. Before she can apply this talent to her life at large, it's already clear some consciousness-raising is urgently required.

"As inspiration for decor and costumes, Foulkes and her crew looked at Dutch paintings of the period, but don't expect any Vermeer-like passages of luminosity or serenity to seep into the picture. The look is grimy, the tone is wacky and the pace is hectic."

Chadwick Boseman, Sienna Miller and Taylor Kitsch star in this action thriller about an NYPD detective who shuts down the 21 bridges across Manhattan to capture a pair of petty thieves turned copkillers. As New York goes into lockdown and the manhunt widens, numerous bigger problems emerge, turning a stock-standard manhunt into something else entirely. 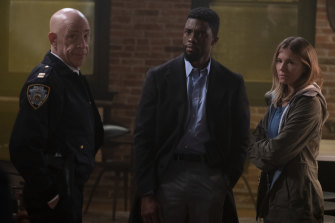 "To be sure, 21 Bridges, directed by Brian Kirk, is a slightly unusual Hollywood cop thriller for 2019, in that even the improbabilities are human-scaled. The hero Andre Davis (Chadwick Boseman) is tough and smart, but not a superman disguised as a regular person in the manner of any action-movie character played by Liam Neeson.

"Davis has a way of getting himself into dangerous situations and has killed seven suspects in the field over the course of less than a decade. Hauled up before internal affairs, he insists his actions were justified in every case, though he looks less than chuffed when others on the force imply his track record should be a source of pride.

"In an almost teasing way, the film seems to offer itself early on as an apologia for police violence, calculated to rule out possible objections. We can't know for sure Davis' defence of his behaviour is watertight, but in the present at least his behaviour is anything but hot-headed. He's also black, ensuring neither we nor the other characters can accuse him of racism (the background of those he's shot in the past remains a matter for speculation).

"But all this is just the starting point for twists that will complicate the picture – and there's also the more abstract side of the film, the chess game played out across the city. While Davis and his colleagues race to restore order before dawn, almost equal screen-time is given to the cop killers (Taylor Kitsch and Stephan James), not flat-out villains but petty crooks who have stumbled into a situation where they're far out of their depth."