It all started when Joe Nocera moved into a house in the Hamptons in 2010.

The veteran journalist soon met Isaac “Ike” Herschkopf, a New York-based therapist who appeared to own the home next to his. Marty Markowitz, who was often outside tending to the grounds of that house, seemed to work for Herschkopf.

But Nocera untangled the apparent truth of their relationship over the next several years – a twisty saga that he turned into a hit podcast which in turn became an Apple TV series, The Shrink Next Door, starring Paul Rudd as Herschkopf and Will Ferrell as Markowitz. 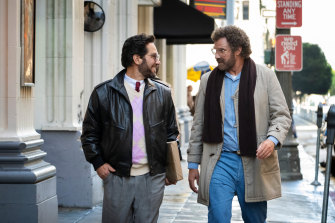 Paul Rudd and Will Ferrell in The Shrink Next Door.Credit:Apple TV+

From a distance, it looks like a writer’s dream: a story gets optioned and becomes a hit show, and its author is rewarded with gobs of money and a halo of Hollywood validation. Yet the story of how Nocera’s story made it onto the screen is almost as tortured and contentious as the relationship between Markowitz and Herschkopf that it portrays.

By the time The Shrink Next Door debuted in November, the award-winning journalist had been fired by his most recent employer, Bloomberg News, the media behemoth that helped shepherd his story to podcast fame. On Tuesday, Nocera filed a breach-of-contract lawsuit against Bloomberg, alleging that the company has denied him profits he is due for the TV series.

Nocera’s camp is casting him as a creative force done wrong by a major corporation profiting off his hard work. “Whatever Bloomberg gets from commercialising this story, Joe gets half of it,” said Vivek Jayaram, Nocera’s attorney. “Creatives can and should be empowered to benefit financially from the work they have created, especially when they’ve entered into agreements confirming that right.”

Kerri Chyka, a spokesperson for Bloomberg News said: “Mr Nocera was treated fairly in all of his dealings with Bloomberg. We have honoured and will continue to honour all of our contractual obligations with him.”

This story is based on interviews with a dozen people familiar with Nocera’s experiences, many of whom spoke on the condition of anonymity to frankly discuss their employers, colleagues, friends and enemies.

When he first encountered Herschkopf, Nocera was a columnist for the New York Times with “a remarkable gift for explaining business issues” to a general audience, according to Bill Keller, the former executive editor of the Times who had brought Nocera to the paper five years earlier after a decade at Fortune magazine. 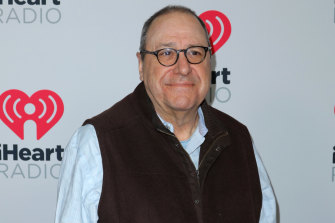 Nocera came to realise that Markowitz, whom he assumed was Herschkopf’s groundskeeper, was actually the owner of the house – and that Herschkopf was Markowitz’s therapist who had taken up residence in the Hamptons home as part of a highly unconventional treatment plan. Markowitz would later allege that the psychiatrist had insinuated his way into his life over three decades, persuading him to break away from friends and relatives, taking control of his business affairs and even throwing parties at Markowitz’s home. Herschkopf, who disputes the allegations, lost his license to practice medicine in New York in April after a state health department panel found he had committed several professional violations.

Nocera spent part of the next two years untangling the complex and troubling relationship and eventually pitched a story to the Times magazine. It was a thorny narrative, and Nocera was himself a character in it. His lengthy draft was submitted to a drawn-out editing process in 2013, but ultimately, just as the piece was nearing publication, Times editors decided they just couldn’t make it work and gave Nocera a kill fee. “It was an ambitious personal story full of weird stuff, but a lot of great magazine stories are like that. I just wasn’t in the position where I could go to bat for it,” said Hugo Lindgren, editor of the magazine at the time, who left the Times a couple months later.

But Nocera never forgot the story. Years later, after he also left the Times and joined Bloomberg Opinion as a columnist, his adult son called him one day with the idea of turning his failed magazine story into a podcast.

Nocera met with the Academy Award-winning documentary filmmaker Alex Gibney, who was intrigued by the story and wanted to turn it into a podcast “about the incredible power to persuade,” Gibney said. Gibney’s recollection is that Nocera’s ties to Bloomberg precluded him pursuing a partnership outside the company.

Around the same time, Bloomberg News entered into discussions with podcast publisher Wondery about potential subjects to pursue together. Bloomberg presented Wondery with a number of ideas, but Nocera’s was the most compelling.

“From day one talking to Joe and seeing the material he had from Marty, I knew it would be a great podcast,” recalled Marshall Lewy, Wondery’s chief content officer. Lewy said that the project worked because Markowitz had saved photos, manuscripts, letters and receipts that documented the strange nature of their relationship. “That’s the only reason we could tell it, because there was enough evidence.”

Bloomberg would not discuss Nocera’s specific claims. But people familiar with Nocera’s work there have noted how the company supported the writer in producing the podcast – giving him time off from his twice-a-week columns, an editor to oversee the process and a fact-checker to confirm the most sensitive details – even though podcasts, and the tale this one in particular told, were both far outside Bloomberg’s chief concern of providing up-to-the-minute business news and data for a core audience of investors and financial professionals.

But it paid off: after it was released in May 2019, the initial 10-episode podcast quickly became a hit and was streamed more than any other new podcast on Apple Podcasts in 2019, eventually accruing nearly 35 million downloads.

Yet despite the podcast’s success, Nocera had already encountered difficulty elsewhere in his career at Bloomberg after having to make high-profile corrections to several of his columns. And not long after the podcast started airing, Nocera wrote two columns that contributed to his downfall at the company.

The subject was a little-known biotechnology company called MiMedx that had become the focus of a short-selling campaign by Marc Cohodes, known in financial circles for his highly aggressive strategies of trying to drive down companies’ stock prices. In August 2019, Nocera wrote two columns – one of which was later appended with a correction – criticising Cohodes for continuing to publicly attack MiMedx even after its stock had tanked and the company had ousted its chief executive in an attempt to clean house.

Nocera wrote that Cohodes had gone “too far.” But his language in promoting his column on social media was far stronger: “The real fraud is the short-selling campaign,” he tweeted.

A Bloomberg lawyer warned the columnist to tone down his rhetoric, according to a person familiar with the exchange. Nocera issued another tweet stating that he should have called the matter a “tragedy” instead of “fraud.” But an incensed Cohodes attacked Nocera repeatedly on Twitter, sometimes in personal and vulgar terms, and issued complaints to David Shipley that seemed to hint at potential litigation. (Cohodes said he does not plan to sue.)

Nocera had been warned by the company’s legal team not respond to Cohodes. But when the former chief executive of MiMedx was found guilty of fraud late last year, Cohodes and others began needling Nocera to retract his old columns. Then, in September, when a key MiMedx product failed clinical trials, Cohodes and others demanded more apologies and retractions from Nocera. And Nocera couldn’t help himself.

“What follows is a response to those insisting that I apologise for my 2019 columns about Marc Cohodes’ assault on [MiMedx]” he wrote on Twitter September 14, at the start of a lengthy thread. “I have nothing to apologise for. I know it’s pointless to get into a Twitter battle with critics, I think it’s important to set the record straight.” He concluded with a jab at Cohodes for continuing to press the issue: “What was the point…? He’d won the war. He’d made money… If he couldn’t root for [MiMedx] to succeed, why couldn’t he at least walk away?”

Not long after, Shipley called Nocera and fired him, according to two people familiar with the conversation.

After that, Nocera hired a lawyer who inquired with a Bloomberg lawyer about the money Nocera said the company owed him for The Shrink Next Door.

Nocera’s lawsuit targets the proceeds from a 2019 deal that Bloomberg and Wondery struck with MRC Studios, the company that adapted the podcast into a television show. Under the agreement, Bloomberg and Wondery agreed to split any revenue generated from MRC on a 50-50 basis, according to the lawsuit. Bloomberg and Nocera in turn agreed to split “all revenue (other than service related fees)” earned by Bloomberg “in connection with the exploitation of the [podcast] by third parties…” according to a contract referred to in the lawsuit that was reviewed by The Washington Post; it states that Nocera would receive 100 per cent of Bloomberg’s half of the initial option price for the series, which amounted to $US125,000 ($176,000).

But according to his lawsuit, when Nocera inquired with the company about his earnings from the deal after he was fired, he was told that Bloomberg’s stance was that journalists were not entitled to a share of advertising revenue generated by an adaptation and that none would be included in his agreement. Nocera’s lawsuit alleges that this flies in the face of the “all revenue” language in the contract. He’s also asking for an accounting of all the money that Bloomberg has earned from The Shrink Next Door.

According to the complaint, Bloomberg acknowledged that MRC owed Nocera $322,500 but that the bulk of that money had been paid out and the outstanding balance of what Nocera would get was $35,000. Bloomberg said it would pay Nocera that money when it received it from MRC. Nocera claims he is owed much more. Jayaram, his attorney, said that Nocera would be suing even if he were still employed by Bloomberg: “He’d be enforcing his rights under either circumstance.” 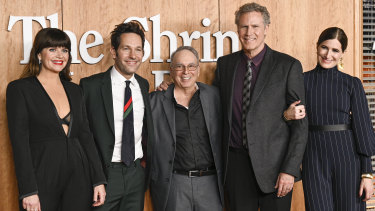 The cast of The Shrink Next Door with Marty Markowitz (centre), whom the show is based on. Credit:AP

Days after Nocera lost his job, Bloomberg Opinion published a letter to the editor from Cohodes in which the investor essentially took a victory lap, denouncing several of Nocera’s claims and praising himself for exposing MiMedx. A stunned Nocera took personal offence. “Throughout two years of constant attacks from Cohodes, you were unwilling to do anything to defend my journalism,” he wrote to Shipley. “But it now appears that his bullying has caused Bloomberg Opinion to allow him to further besmirch me … At the very least, you should have allowed me to respond to his letter.”

Shipley declined. “Please know that I wish you every happiness and success going forward,” he concluded.

A little more than a month later, The Shrink Next Door would debut on Apple TV to mixed reviews, some of them musing that the TV series could do little to improve upon Nocera’s epic podcast.

Nocera, who has since inked a contract to make podcasts for British publisher Blanchard House, was there for the red-carpet premiere, mingling alongside Rudd, Ferrell, Kathryn Hahn, Casey Wilson and the other actors at New York’s Morgan Library & Museum. The stars lavished particular attention on one VIP guest – Marty Markowitz himself. But in an interview with The Washington Post, Markowitz turned the spotlight back to the writer he met in his yard a decade ago.

“This story would never have seen the light of day without Joe Nocera,” he said. “There’s no question about that.”