The coronavirus cluster linked to Melbourne Airport’s Holiday Inn has again swelled overnight, with another two people testing positive for COVID-19, bringing the total number of cases linked to the outbreak to 13.

One of the cases spent more than eight hours at a busy airport cafe while infectious. 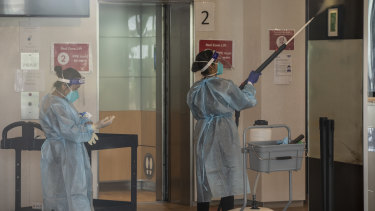 Victoria’s Department of Health confirmed the new cases in a tweet at 11pm on Thursday night – stating that both are household primary contacts of previously announced cases.

Five cases in total were discovered on Thursday, as authorities confirmed there were between 400 and 500 close contacts of confirmed cases.

There are no mystery cases in Victoria – it has been 37 days since the state had a case with no known source.

Brunetti cafe at Melbourne Aiport’s Terminal 4 was added to the state’s growing list of ‘Tier 1’ exposure sites just after midnight on Thursday.

A newly confirmed positive case was at the cafe for more than eight hours from 4.45am to 1.15pm on Tuesday February 9 while potentially infectious.

Anyone who visited the cafe or who worked during those times is being directed to isolate and test immediately and remain isolated for 14 days.

One of the five cases announced on Thursday was believed to have had some contact with Camberwell Grammar School, Department of Health COVID-19 response commander Jeroen Weimar said. The school closed on Thursday.

Genomic sequencing has confirmed that at least six of the 13 cases are the more contagious UK variant B.1.1.7 strain of COVID-19.

On Friday morning, there were 29 different Tier 1 exposure sites – which require mandatory 14 days of isolation for attendees- in 14 different suburbs across Melbourne.

The outbreak, which authorities believe may have begun by the use of a nebuliser inside the hotel, prompted several states to tighten their borders to travellers from Greater Melbourne yesterday.

South Australia snapped its border shut to travellers from Melbourne at midnight on Thursday, while Queensland will ban entry to visitors to the city’s exposure sites from 1am on Saturday. Western Australia also announced its hard border to Victoria would be extended for at least another seven days. NSW remains open to all Victorians, but incoming passengers are being screened.

Get our Coronavirus Update newsletter for the day’s crucial developments at a glance, the numbers you need to know and what our readers are saying. Sign up to The Sydney Morning Herald’s newsletter here and The Age’s here.