Two years after bestselling and beloved British author Terry Pratchett died, the hard drive was taken out of his computer and run over by a steamroller – as per his instructions. No drafts, no half-finished stories, no lost scenes from his novels were ever going to see the light of day. In life, Pratchett guarded his work and his legacy very closely. It makes sense that this attitude would continue even beyond the span of his life.

Terry Pratchett: A Life With Footnotes* makes it clear from the outset that this is “The Official Biography” – those exact words appear as a footnote on the cover. It’s written by Rob Wilkins, Pratchett’s personal assistant-turned-business manager who now manages the author’s literary estate and production company. The pressure of the task must have, at times, been immense for someone who witnessed Pratchett, after reading the first draft of an adaptation of one of his novels, call up director Sam Raimi to say “it’s shit”. 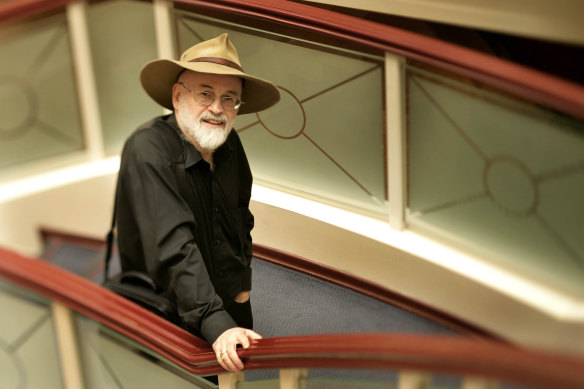 Terry Pratchett, seen in 2007 during a visit to Melbourne, was fighting constantly against where society wanted to put him.Credit:Mario Borg

Pratchett wrote more than 50 books and is best known for his Discworld novels, a satirical fantasy series that takes aim at everything from the injustice of poverty to the ingrained bureaucracy of the post office. In his late 50s he was diagnosed with a rare form of Alzheimer’s disease. He died in 2015. This fact is presented by Wilkins early on, so as he slowly paints a picture of this complex man, as readers come to know him more intimately, there’s always the knowledge that his story comes to an all-too abrupt end.

Alongside his warmth and puckish humour, Pratchett doesn’t have his grumpiness buffed away, even though the biography is clearly filtered through the lens of someone who loved him. It’s an essential part of the book – his anxiety, anger, pride and sense of injustice were necessary to produce the kind of novels he did. 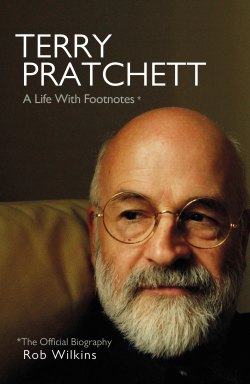 Wilkins lays out stories where Pratchett, having found success in his writing, negotiates high-figure advances down out of concern that a particular book might not earn it out fast enough. Pratchett tries to have his books pulled from contention from awards because he hated being shortlisted if he wasn’t going to win.

Words are a shadow that an author casts; they are their life experience rendered in letters. This book tenderly and perhaps at times with arguably too much detail shows how life and early choices shaped Pratchett into the man who came through in these letters, a man who delighted in obscure references and strange jokes and on picking apart words and putting them together in new ways.

The first half of A Life with Footnotes* looks at Pratchett’s life from childhood through to when he turned to writing full-time. Part two takes a more thematic and less chronological approach, looking at the time after Pratchett became a best-selling author, how he approached work, money, success, ego – and the impact of his illness. Pratchett himself had toyed with writing an autobiography for years, and when his diagnosis came in, he started work on one with Wilkins. There are lines from this work peppered throughout part one of the biography.

It isn’t surprising that what most recommends this book is the anecdotes, amusing or sombre or often a mix of the two. How he kept a picture of a book-pulping machine on display in his office. The time he found out he was on the bestseller list, just beaten out by Stephen King, to which he responded, “I bet he’s not in his back garden fixing a puncture on his daughter’s bike”. Stories about a young Pratchett sitting on the floor of a store mostly known for selling pornographic material, happily making his way through a box of sci-fi and fantasy magazines.

The individual tales are diverting, but it’s the picture that forms between them that is the most interesting. Seeing him grow from a boy in a house with no running water, attending a church where the vicar would refer to his working-class congregants by their last names, being told at the age of six that he had no academic value, show the building blocks of a writer who would rail against class in his later novels. The final chapters that show Pratchett in decline due to his illness are truly devastating.

His 25th Discworld novel, The Truth, looks at the realities of working at a newspaper and is clearly informed by his years spent as a journalist. A Life with Footnotes*, however, shows how the harrowing and humorous experiences Pratchett had across those years spill into all his books, not only that one; into the methodical approach to writing that meant he regularly produced several novels a year, and into his outlook.

It’s a book written with fans in mind – made most clear by the casual inclusion of a major spoiler for one of Pratchett’s later novels – but is arguably also accessible to those walking in cold. Ultimately, Terry Pratchett: A Life with Footnotes* is the story of a person fighting constantly against where society wanted to put him. It captures the spirit of Pratchett’s writing by telling hard truths through a (mostly) enjoyable-to-read layer and inspires rage, laughter and sadness in turns.

The Booklist is a weekly newsletter for book lovers from books editor Jason Steger. Get it every Friday.