When I was in primary school, I was great at maths – in high school that really fell away and I started to fail. When that happens, is it a result of bad teaching?

There are multiple factors: if it were a simple problem I think we would’ve cracked it by now. I will say that disengaging teaching – the kind that makes sure students are in rows all lesson every lesson, quietly copying from a blackboard and then doing 500 questions from a textbook – that is the fastest way to bore someone out of studying any subject, let alone maths. 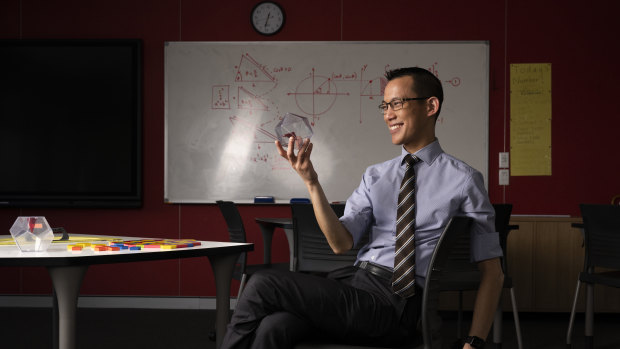 So the way things are taught is a factor, but it’s not the only factor. I encounter students constantly who maybe miss a crucial concept or idea – maybe they have one bad year. And because all mathematics – I like to think of it as a really great story, all the bits are interconnected. So if you miss a crucial chapter in the middle, you try to pick up afterwards, but you’re just missing pieces and foundations.

I regret it now, because as a teenager I thought maths was boring. Now as an adult I find it fascinating, but I don’t understand it at all.

It’s a bit magical, isn’t it? I guess I would say, it’s really important to recognise that – it might not seem like it – it is actually never too late. I am a real latecomer to mathematics. I was always slow, always behind the eight ball.

I came to realise when I became a teacher that the reason I was like that – well, two reasons: one, I’m just a slow writer. I don’t think I finished an exam in my life. And then, second, I’m the kind of kid who irritated teachers all the time, saying: but why is that the case? Why do we have to use this formula? Where does this formula even come from?

Me asking those questions was annoying, and I often didn’t get answers, so I’d get held up and I wouldn’t progress. So in terms of maths at school, I didn’t just accept the formula and then do it. So I never got that great at it because I was always asking more questions. I’ve come to realise that actually makes me quite a good teacher.

So when you made that late-blooming transition, what was it that inspired you?

I think probably there are two pieces to that puzzle. The first one is that I have an older brother who is excellent at maths. He always was. I always watched him in awe and wonder and I was like, wow, how does someone do that, there must be something in here. Second, it’s when I started teaching it and when I started helping other people understand it, that I revealed to myself that things I thought I knew about maths, I didn’t understand at all; I was just following a procedure.

The first moment that I taught someone something – something really basic, Pythagoras theorem – and I made it click for a student. Because what I did was, I didn’t just tell them the formula, I actually showed them where the formula comes from. You take a piece of paper, you cut it up into pieces and you rearrange it, and it’s just … students’ eyes widen and they’re like whoa, I get it. And that experience of helping a class, a student, learn and have their eyes open: I fell in love with that sensation and I’ve never looked back.

You might not say that being good at maths, or science, or economics, is a natural, inborn talent. But is being good at teaching?

The way I would say it is, some people are just born with a talent, and that’s amazing. However, I think anyone who is performing at the top of their field would say it really takes work to bring the best out. And even for those without natural talent – like I don’t have any natural talent with mathematics, but I’ve worked at it for years.

I frequently teach students who are much brighter than me, but I’ve learnt the skills of questioning, the skills of being able to illustrate something in a way that doesn’t just spoil the answer, but lets a student develop it themselves. That’s a craft that can be learnt. That’s most of my job these days. I support other teachers, helping them become more effective in the classroom.

And now you also have a job as an entertainer on TV. But to what extent is a teacher a performer anyway?

I think to a great extent. I work with a lot of university students training to become teachers, and one of the first things I tell them is, you will need to develop a teacher persona: it’s made of you, you can’t teach inauthentically, but an average high school teacher has 150 students every year, and not all of them are going to learn in the way that you naturally find comfortable learning.

So you need to develop a holistic persona that has broad appeal, that is relaxed but firm, that is insightful and clever and bright but also humble enough to not make people feel stupid when you know the answer and they don’t.

Ultimate Classroom is on 10Play.