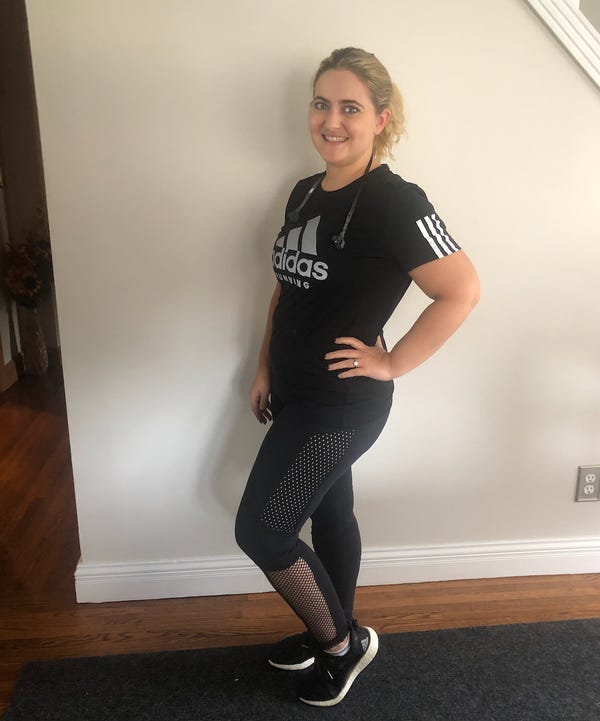 Although I would never call myself a runner, I've always enjoyed it.

In the years before getting pregnant, I had gone for a run outside whenever the weather was nice or I couldn't make it to the gym.

But at the time of writing this, four months postpartum, I was feeling things many new parents feel: exhausted, overwhelmed, stressed, isolated, and enthralled with my new baby. But I also felt physically weak, anxious, a little sad, and severely lacking any sort of self-esteem.

My body had changed so much, I hadn't worked out in quite some time, and I was desperate to get back into it.

So I decided to challenge myself to try running for 30 minutes each day for a month.

It's worth pointing out that running every day can increase one's risk for "overuse injury," which results from doing too much physical activity too fast, according to Healthline. Still, I decided to go ahead with my challenge with the thought that if I felt too exhausted or in pain, I would rest.

My first run couldn't have happened on a better day. It was a crisp, sunny Monday morning, and it was warm enough that I could get away with short sleeves.

Still, I won't lie, that first run was brutal. I had to really push myself to get through the full 30 minutes.

I started by doing intervals of walking and running because that's what I knew my body could handle. I did three minutes of brisk walking followed by six minutes of running, and then I repeated that until the 30 minutes was up.

As hard as that first run was, it also felt amazing. I hadn't pushed my body in that way in such a long time, and I had forgotten how great it felt to do so.

The next few runs were considerably tougher, and the weather wasn't helping. It was cold and rainy during most of my runs that week, and the perpetual mist left me with chills.

The other issue was that my legs were incredibly sore, and although the pain lessened the more I moved, it was hard to push myself to get out there for the first few strides.

My fourth run landed on my birthday and it was very rainy and windy. In the past, I would have used my birthday as an excuse to skip out on my run, but this time, I forced myself to lace up my sneakers.

It wasn't my best run of the week, but I did the full 30 minutes, and it felt great.

To be completely honest, I did miss two days the first week. One day I planned to run, then my babysitter canceled. The second day, errands and obligations got in the way — although I tried to make up for it by taking my daughter for a long walk.

By the end of the week, I had started looking forward to my runs despite my sore legs and the considerably colder air. It wasn't just a chance to get back into exercise, it was also a full 30 minutes to focus on myself.

I felt a little more motivated during the second week

Despite missing two days of the previous week, I felt motivated to get back into my new routine.

For me, one of the best things about my runs was that it was time for myself. When I was running, no one needed me to feed them, or clean up spit up, or hold them until they stopped crying. No one was asking me questions about the baby, no one was reminding me about writing deadlines, no one was interrupting me.

It was just me, my music, and the fresh air.

Still, halfway through the week, I noticed that I was feeling some physical pain.

My upper back was hurting by the end of the day whenever I ran, and it was starting to really bother me. I know lower back pain is common with running — especially on hard pavement — but I hadn't heard much about upper back pain.

To make sure everything was OK, I spoke with Hope Gaston, a biomechanics and muscle-health specialist with Activbody/Activ5. She told me that upper back pain usually comes from spinal-extension problems.

"If there is weakness in spinal extension, gravity starts to win and we begin to round forward. This shifts our shoulder blades forward, which may irritate the muscles around them, leading to pain," she said.

In other words, I was subconsciously leaning forward while I was running, which was hurting my upper back and shoulder blades.

For my next run, I paid attention to the way my body was moving and noticed several minutes in that I was indeed leaning forward. By the end of the week, the pain lessened just from me being cognizant of my running posture.

During the third week, I started feeling really great about myself mentally — but physically, I was hurting

By the beginning of the third week, I found an excellent source of motivation: listening to some of my favorite, angry pop-punk songs from the early 2000s. It was fun, brought back high-school memories, and really got me moving.

One run of the third week stands out: it was very cold and windy, and I pushed myself to go for a run before the forecasted snow began. Halfway through, however, an icy rain began to fall leaving me drenched. By the time I was nearly done, it was snowing.

But I wasn't deterred. Wiping water off my face with my sleeve, I kept moving and I felt so proud of myself.

It was the strongest I had felt since the day I gave birth. I had been dealing with some very intense self-esteem issues since handling the body changes that come with getting pregnant, and I realized that running was slowly making me feel a little bit better about myself.

The week wasn't all good, though.

Toward the end, my upper back pain had subsided, but my knees hurt and my legs were super sore. The pain in my knees was so bad that I actually had to take two days off.

I spoke to Gaston about avoiding injury while running, and she said it's important to space out workouts in order to let my body rest.

My body needed a break, and as much as I wanted to run every day for my challenge, I knew I had to listen to it.

By the fourth week, I had improved a little bit, but I was still hurting

Going into my last week of the challenge, I noticed that my pace had improved a little bit. I had also adjusted my intervals: instead of only running for six minutes, I was able to run for seven minutes, sometimes eight.

Small improvements, sure, but for me, they felt awesome.

Still, I had other challenges that week. Some days, it was hard to find a babysitter and it was starting to get dark earlier.

I was also still in pain. My knees were hurting a lot and one day my back hurt so much that I couldn't do much at all.

Again, I didn't get to run every single day, but I did learn a lesson: You have to listen to what your body is telling you, regardless of how often you want to work out.

Even though I didn't technically complete the challenge I had set out to do, I was doing what I could — even on the days I didn't want to.

Overall, the challenge was beneficial for me physically and mentally

At the end of the 30 days, I was really proud of myself. My pace was slowly-but-steadily improving, and I was getting better at stretching, cooling down, and keeping an upright posture through my runs.

Mentally, I felt stronger — like I had more control over my body than I had for months — and confidence was slowly coming back to me. Plus, the extra "me time" was helping me feel more like myself again.

Will I keep running every day? Honestly, no. It's an unrealistic schedule for a working, new mom to keep up with.

Even though I work from home, I can't always find a sitter, and my daughter can't safely ride in a jogging stroller for a few more months. Additionally, because of the pain in my knees and back, I now know that my body needs rest days throughout the week.

I'm definitely going to keep running a few days a week, and I feel good about that.