There was this girl in my year at high school. She was quiet and smart and thoughtful and funny. I didn’t know about most of those qualities until later though. All I knew in that moment was that she wasn’t me. 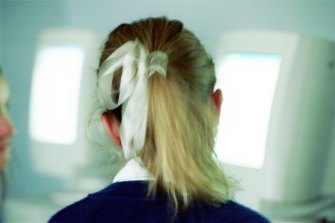 She was not ‘unlikeable’, she was just targeted. And so had I been.Credit:Erin Jonasson

It wasn’t me who was the victim. But it was me who laughed. Who dived for my own Impulse can. Who sprayed her too. And kept spraying as she screamed and desperately tried to shield herself from the sprays and the laughter and the jeers.

We didn’t do it because she was unlikeable. I think the excuse the ringleaders used – the inspiration for this particularly cruel form of bullying – was that she had bad body odour.

Does that mean she should have changed? Should have done something more to control her BO? Would that have prevented her from being so viciously attacked?

That’s what John Marsden, one of Australia’s most prominent young adult writers – and an educator with two schools of his own – would have you believe. This week he told Hilary Harper on Radio National that bullying is mostly “feedback” about unlikeable behaviours, suggesting that “likeable” children are rarely bullied.

Setting aside the idea that being “likeable” is something to which we should teach kids to aspire – because it really isn’t – in my lived experience, Marsden’s logic is deeply flawed. Because that girl? She was likeable. I know because, years later, when I had matured, I became friends with her. We had a lot in common.

She was a wonderful friend – and I would have known that a lot earlier if I had bothered to try. If I wasn’t so concerned with being likeable. I wanted to be liked so desperately because, for years before that, I had been bullied myself.

Throughout primary school and bleeding into high school, a group of boys had teased and taunted me on a daily basis.

I tried my hardest to be likeable, and I was still bullied. And worse, I became a bully.

Most of the time, I laughed it off. I made jokes in retaliation. I rarely reported it. I cried, but never in front of them. Not if I could help it.

The same way I just wanted the girls in that change room to like me.

I tried my hardest to be likeable, and I was still bullied. And worse, I became a bully.

There was nothing that girl could have done or said that day to prevent what happened. It was just one incident in a series of routine attacks. I never saw them that physical again, but I witnessed her being verbally taunted frequently. Sometimes, I took part in it myself.

We didn’t want her to change. We weren’t providing “feedback”. We just wanted to hurt her.

I wanted to hurt her because as long as she was being hurt – I wasn’t. Or so I thought.

The truth is, the only unlikeable people in the changeroom that day were the ones holding the Impulse cans, hurting a girl who deserved so much better.

We shouldn’t be teaching kids to be likeable, to conform to what privileged people deem appropriate behaviour, as Marsden suggests. We should teach them to be kind and bold and brave and critical and most of all, to be themselves.

The only way to prevent bullying is to teach kids not to bully. Anything else is just victim-blaming.