Words that could have come straight out of my mouth, and out of the mouths of thousands of other bisexual people around Australia. These words were spoken by Holly, one of the contestants on the latest season of The Bachelorette Australia. 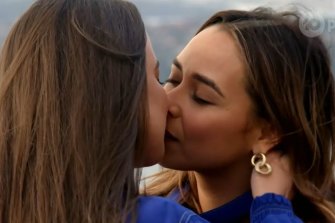 Bachelorette Brooke Blurton and Jamie-Lee kiss on top of the Sydney Tower Eye during this week’s episode.Credit:Network Ten

Upon hearing them a few weeks ago, I immediately felt myself getting teary. I’d just witnessed a conversation about bisexuality as well as LGBTQI+ relationships and gender identity on primetime television between two queer women. This week, viewers of Ten’s reality show witnessed Bachelorette Brooke Blurton and contestant Jamie-Lee kiss for five minutes during a date on top of the Sydney Tower Eye. (They were given a challenge to break the current world record of the longest on-screen kiss – four minutes and 10 seconds – and rose to the occasion).

Blurton has said that as the first bisexual Indigenous woman lead on the show, she is doing it for her younger self because she never saw herself represented on television. “I can’t stop thinking about that young girl and how much it would have meant for her”.

At 13, I was desperate to push down the feelings I was experiencing towards women. I was desperate to be straight. And why on earth wouldn’t I want that? I could see how same-sex attracted people were treated – it was right there on my TV screen.

The people from the LGBTQI+ community shown on television in the early 2000s were either the butt of the joke or used as shock value ratings fodder. Remember when a whole episode of Big Brother was dedicated to “a shocking big secret” about one of the intruders, the late Miriam Rivera, which turned out to be that she was transgender? 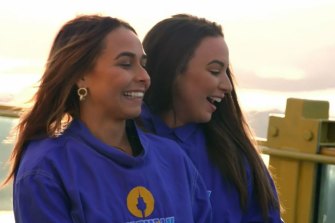 Brooke Blurton has been a contestant on The Bachelor and Bachelor in Paradise, but now she’s the first openly bisexual Bachelorette in the world.Credit:Network Ten

Young queer people watched closely as our futures – marked by jokes and “oh my god aren’t these people shocking!” narratives – played out in the public domain. Such narratives, or lack of, contributed to what we decided our worth was in the world. And back then, television told us we weren’t worth much.

I can’t even remember seeing anyone who represented or discussed bisexuality at all. And yet, I was compelled to “learn” about these so-called “adult” relationships and sexual behaviours on shows like Big Brother Up Late in order to fit in and be “normal”.

My younger self would have benefited enormously from having Blurton on my television screen. Seeing her slow dance, kiss, and discuss sexuality and identity with women, while also being able to do the same things with men, that would have blown my young mind.

Sexuality shouldn’t be something that’s played up for laughs – it should be an everyday, mundane detail that people don’t bat an eyelid at. It should also be properly represented in popular culture. The more this happens, the safer and more represented the LGBTQI+ community becomes.

Of course, many of us remain somewhat wary of this brave new Bachelorette world given the franchise’s heteronormative and often misogynistic past. But remembering my teen self watching wide-eyed as queers were the joke and women were being “turkey-slapped” in their sleep on national TV, I’m very thankful that young people today have far more inclusive reality shows to learn from instead.

Chloe Sargeant is a Sydney-based writer, producer and illustrator. She is one half of the Chronically Fully Sick podcast, and is currently writing a book about living with fibromyalgia. You can find her on social media at @chlosarge.

Make the most of your health, relationships, fitness and nutrition with our Live Well newsletter. Get it in your inbox every Monday.

Most Viewed in Lifestyle