I’ve always been fascinated with heels, jewellery and makeup.

I was probably around four years old when I first started taking things from my mum’s makeup bag and trying them out on myself.

Importantly, she never discouraged me and always told me I looked gorgeous. I think this helped build my confidence.

Then, at around the age of seven, I started attempting proper techniques and trying to create actual looks.

When I was eight, I came up with my drag character, Francheska Valley. I liked that the first name began with an ‘F’, like Fabian , and we live in the Valleys, in Wales – so it just worked.

Francheska is a sassy queen who doesn’t care what anyone thinks. She is a fashion icon, and the best looking person in the room. Her style is big gowns, big jewellery, long wigs, and always legs out – because Francheska has the best legs in town.

I’m now 12 and, for the last four years, I’ve loved having her as my alter ego. Starting drag and creating this character just felt right and was something I really wanted to do, after being fascinated by seeing queens like Courtney Act and Yvie Oddly on RuPaul’s Drag Race. 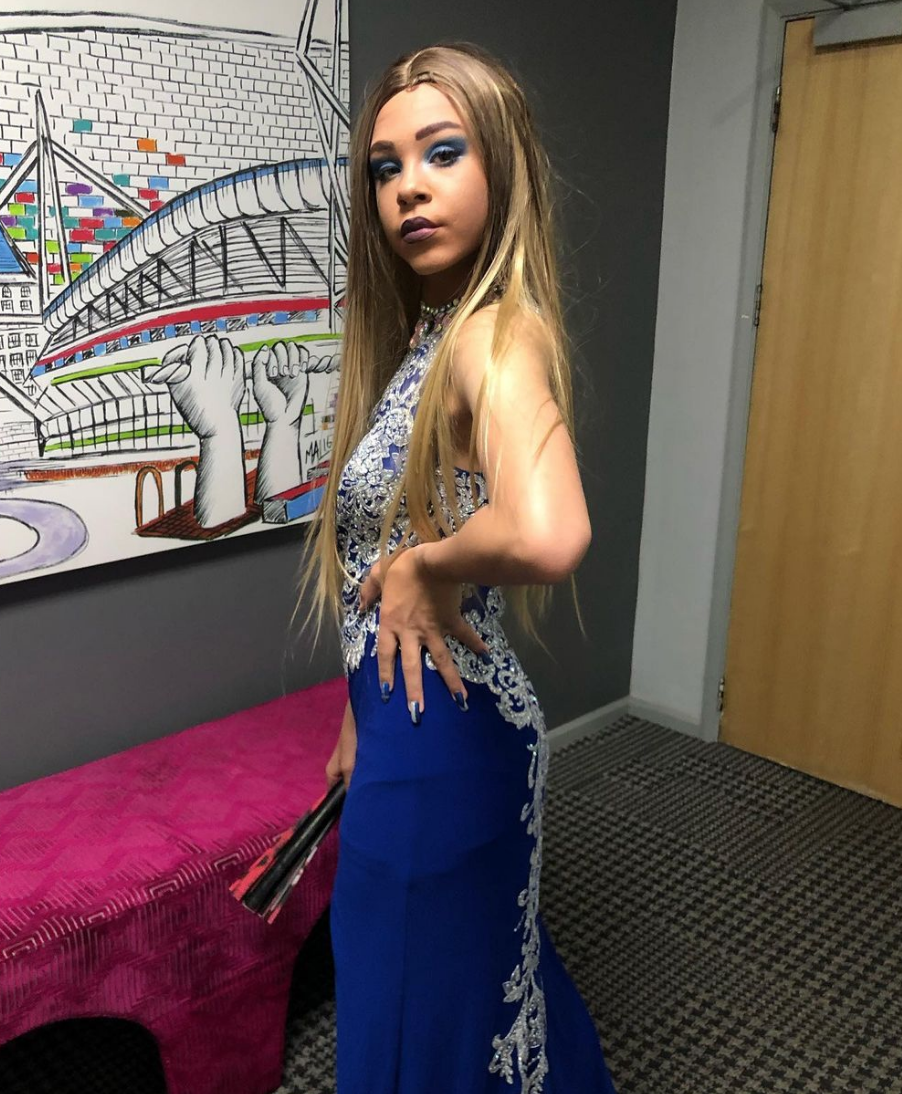 I’m a performing queen as this is where my skills lie. There are different kinds of queens, for example some specialise in comedy – but I love to dance and lip sync. Two of my favourite songs to lip sync to are Upside Down by Diana Ross and Rules by Doja Cat.

I can almost do the splits and I’ve mastered the ‘death drop’ – the iconic dance where you’ve got to jump up and fall on the ground, with one leg extended straight out and the other bent back at the knee. I practised jumping off my settee at home and it took me about four days to get right – just one of the benefits of starting so young!

Some people think that this is just a ‘phase’ I’m going through and make comments because of my age, but it’s more than that. It’s completely natural to me. I’ve always been a performer; I come home from school singing and dancing, it’s just who I am.

My mum has had some nasty comments on social media, with people calling her a child abuser because she allows her son to wear makeup. But she’s proud of me – and that means so much. It helps me to express myself and be who I truly am inside.

Over the years, I have had a couple of people come up to me in school and make comments or call me gay – I just tell them I don’t care what they have to say. For them to take time out of their day to think about me so much, I must be pretty special.

I think I’m able to deal with it so well because I’m confident in who I am – and a lot of that is down to the support I’ve had from my mum. I can’t imagine what it would be like if you didn’t have a parent who supported you.

I think it would make your life more difficult, and you’d feel unable to be who you really were inside.

We live in a village in South Wales and everyone has been supportive of me here, other than a minority of people. I’ve always been flamboyant, so I think most people are just used to it!

I have different makeup looks for different occasions. For school, I’ll just use a bit of eyeshadow and paint my nails in a fun colour. At the weekend, I’ll do some eyeliner and spend more time on my look. Then, when I’m performing, I go all out.

To celebrate 50 years of Pride, Metro.co.uk has teamed up with Kyiv Pride to raise money for their important work in Ukraine.

Despite war raging around them, Kyiv Pride continue to help LGBTQ+ people, offering those in need shelter, food and psychological support.

We will be splitting the funds with akt, a charity dedicated to supporting young homeless LGBTQ+ people.

You can donate here

Of the last four years, two have been taken up with Covid, so it’s been hard to get out and about as much. But I’ve performed at lots of talent competitions at school and I used to take part in a drama class every weekend, where I put on shows regularly.

I also went to DragCon in London and won a lip sync competition, performing in front of 6,000 people. That was an amazing feeling!

A couple of years ago, I took part in a documentary about ‘drag kids’ that saw me travel to Montreal, where I got a three hour ‘voguing’ tutorial from Cesar Valentino, who became famous in the New York scene in the 1980s. I’ve also been on This Morning with Holly and Phil!

I love drag. Performing makes me feel confident and untouchable and, ultimately, you’re putting on a show for people who want to see it. It’s fun – for the audience and the performer, and it brings joy to everyone who is involved in it.

I want to show other children my age that it’s OK to be the way that you are – and that it’s OK to speak to your parents and tell them how you’re feeling, and what you want. For me, being able to do this has made me the confident, happy person that I am now.

And I have big plans for the future. I want to get on RuPaul’s Drag Race – and win it. I’m inspired by queens like Asia O’Hara, Miss Vanjie, Gottmik and Tayce (who is from just 10 minutes along the road from me!).

I’d also love to take part in Werq the World, an ongoing tour that features the Drag Race queens. Then, I’d love to have a successful career as a queen, and use my money to set myself up for life, and buy a house and things like that.

I’m not too young to be a drag queen – I’ve just got a good head start on things. It means I’ll have plenty of time to get ready for my Drag Race application, and get my Doja Cat impression up to scratch for the Snatch Game Challenge, where the contestants have to impersonate a celebrity and make it as funny as possible.

I would say that it’s never too early to start drag – I mean, people even put dogs in drag! Anyone can do it, although if you’ve got supportive parents and friends it does help.

I’d say anyone who likes the idea of it should give it a go. It’s been the best thing I’ve ever done and I can’t wait to see where it takes me.

Fabian’s mum, Rachel Butler, was also present during this interview

Age is Just a Number

Welcome to Age is Just a Number, a Metro.co.uk series aiming to show that, when it comes to living your life, achieving your dreams, and being who you want to be, the date on your birth certificate means nothing.

Each week, prepare to meet amazing people doing stereotype-defying things, at all stages of life.

If you have a story to share, email [email protected]

This year marks 50 years of Pride, so it seems only fitting that Metro.co.uk goes above and beyond in our ongoing LGBTQ+ support, through a wealth of content that not only celebrates all things Pride, but also share stories, take time to reflect and raises awareness for the community this Pride Month.

And we’ve got some great names on board to help us, too. From a list of famous guest editors taking over the site for a week that includes Rob Rinder, Nicola Adams, Peter Tatchell, Kimberly Hart-Simpson, John Whaite, Anna Richardson and Dr Ranj, we’ll also have the likes Sir Ian McKellen and Drag Race stars The Vivienne, Lawrence Chaney and Tia Kofi offering their insights.

During Pride Month, which runs from 1 – 30 June, Metro.co.uk will also be supporting Kyiv Pride, a Ukrainian charity forced to work harder than ever to protect the rights of the LGBTQ+ community during times of conflict, and youth homelessness charity AKT. To find out more about their work, and what you can do to support them, click here.