A man who was serving a life sentence for selling $20 of marijuana was released from a Louisiana prison this week, his attorneys said. Fate Winslow, 53, was reunited with his children and grandchildren on Wednesday after serving 12 years in prison.

“I’m full of joy,” Winslow told CBS News. “I’m so happy, man. I got to be with my family last night once I was released, and I can’t explain it. I’m so happy.”

In 2008, Winslow was homeless and living on the streets of Shreveport when he was approached by an undercover cop in search of marijuana, according to his attorneys at the Innocence Project New Orleans. They said Winslow borrowed a bike, returned with two dime bags of marijuana worth $20, and gave it to the officer for $5 so he could buy food. Winslow was arrested for distribution.

Winslow had three prior convictions of non-violent crimes: business burglary, car burglary and cocaine possession. Under state law, he received a mandatory life sentence as a repeat offender. 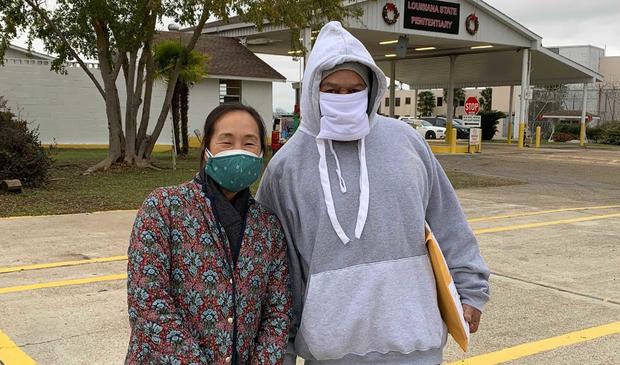 His attorney, Jee Park, said Winslow’s trial attorney completed “little no work” to fight for a lesser offense. “He did not get the jury process that he should have received. He did not receive the representation he’s entitled to,” Park told CBS News.

Winslow was re-sentenced after connecting with Innocence Project New Orleans. After applying for relief, Winslow’s sentence was updated to 12 years with credit for time served, leaving him free to go. He has since reconnected with his family, including nieces and nephews he had never met before.

“Everybody — my sisters, my brothers, they’re just happy,” Winslow said.

His daughter, Faith Winslow, called her father’s arrest “too long” and said she was “grateful” for his release and a second chance at life. “My dad and I got closer while he was imprisoned. Even though he was locked up, he was there for me when I needed him. I cannot wait to have my dad back fully in my life,” she said in a statement.

Now a free man, Winslow’s only plan is to just “get on with his life.” He starts a new job on Monday and plans to spend as much time as possible with his family. He doesn’t think he’ll forget the time he spent in prison – especially during the coronavirus pandemic – and remains grateful to the work his legal team did to free him. “I thank God I made it through. That’s all I can say, I just give all the thanks to him,” Winslow said.

Park said there are hundreds of people serving life sentences for non-violent crimes in Louisiana and her organization’s work is far from over. “I wish Fate was our final client, but that, unfortunately, is far from the truth,” Park said. “There’s a reason why Louisiana is the incarceration capital of the world. We have a lot of work to do.”