Retail forecasters might purport to know the toys every child is asking for this Christmas, but Patrick Sheean, 79, is probably one of the best placed people in the country to make a prediction.

"I can tell you what the big thing is at the moment," says the man commonly known as Santa Pat. "Frozen. Every little girl wants something from Frozen. Or an iPad. Back when I started, it would have been a Meccano set." 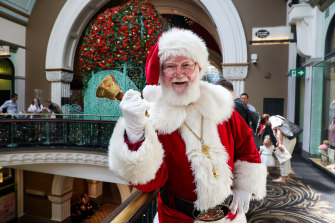 Santa Pat is celebrating 40 years in the suit this year.Credit:Edwina Pickles

This year, Mr Sheean celebrates 40 years of donning the red suit. The former farmer and salesman has done the gig in various settings – stores, hospitals – across regional NSW and Victoria, but since 2014 has relocated from Melbourne to Sydney over November and December to listen to the Christmas wish-lists of the littlest Sydneysiders at the QVB.

In that time, he has received 10,000 letters from children, which he keeps in his shed at home to read with his wife Beverley, 83, who appears as Mrs Claus on occasion and will make her QVB debut this month.

Many of the letters are funny – though frequently illegible, he says, laughing. Mr Sheean has also seen children become increasingly altruistic in their Christmas wishes over the years. One of the most common requests is for "world peace", he says.

"A lot of the kids today are thinking about others, which is very lovely to see." 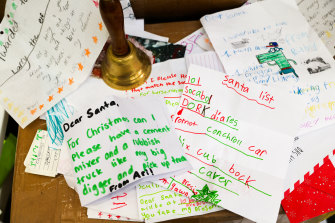 Some of the 10,000 letters Mr Sheean has collected over the years.Credit:Edwina Pickles

Then there are the other types of wishes he worries Santa might not be able to grant: "I got one little letter asking if you can get my daddy to come home and that stuck in my gut. I haven't been able to forget that, that was a few years ago now."

A father of five, grandfather of nine and great-grandfather of two, Mr Sheean admits his eldest great-grandchild "freaked out" the first time she sat down for a photo with Santa. His family are travelling in from across the country to have their picture taken this year.

The picture serves as a little pre-Christmas gathering: as Santa is working hard right up until December 24, the Sheeans' Christmas celebrations happen on December 29.

Despite the physical demands of the job, Mr Sheean doesn't plan to hang up any time soon ("as long as I keep swimming and walking, age is only a number"). He says some of the most special times in the suit were in the saddest circumstances. He recalls a very sick child whose appointment at the QVB was cancelled. When the team found out why, Mr Sheean jumped in a cab to the hospice.

"I nursed him for probably 20 minutes," he sighs. "I hugged his father and we both cried, of course. Two days later we heard from his family and he'd passed away. But, oh, the way he looked when he saw Santa."