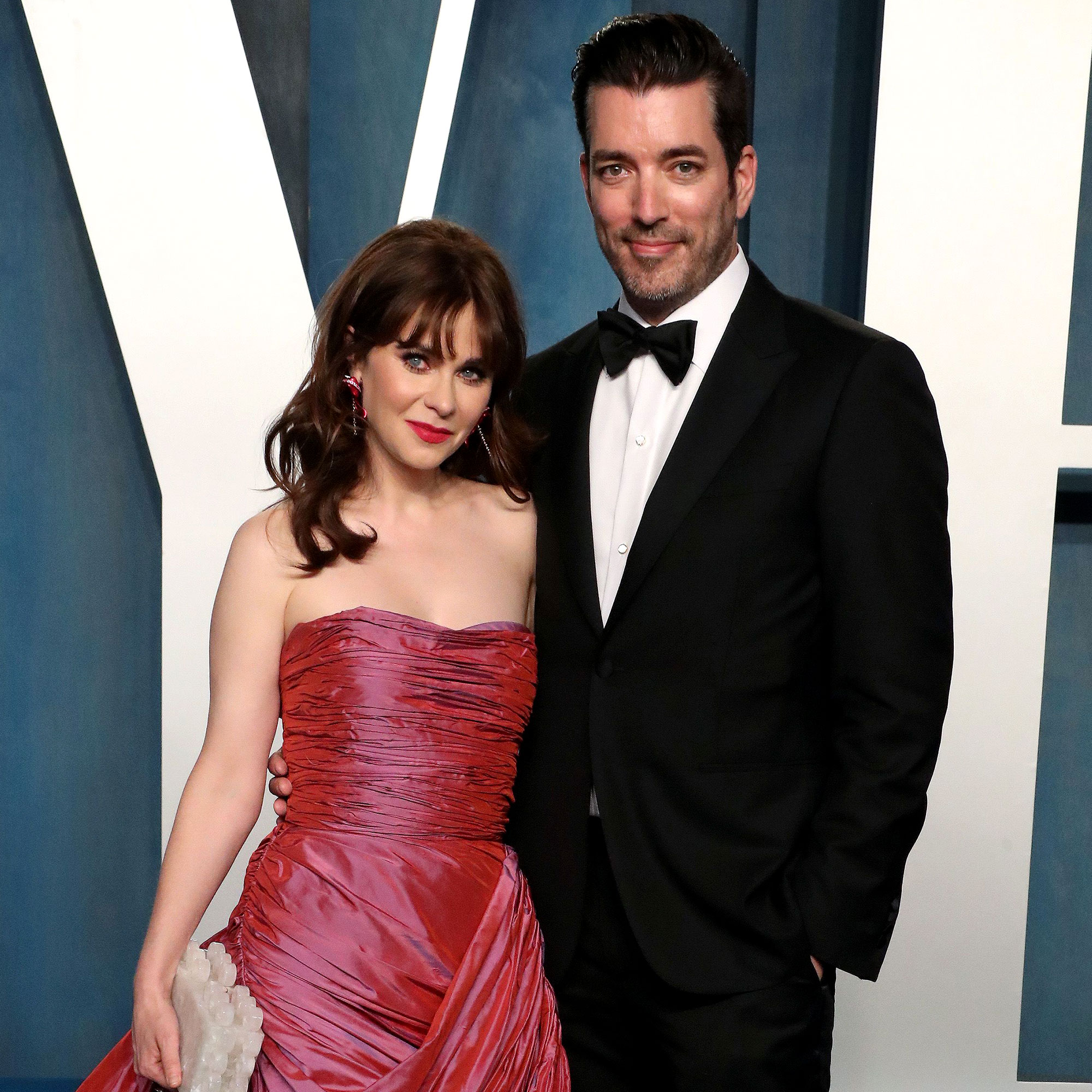 All in the family! Shortly after Jonathan Scott and Zooey Deschanel fell in love, he was thrust into a brand-new world — parenthood.

“Family’s very important for us and we’ve got two kids,” the Property Brothers star, 44, told Entertainment Tonight on Wednesday, August 3, referring to Deschanel’s two children. “They come over all the time with the nephews, the nieces and everyone’s friends — they all play together. I can just imagine as Parker [twin Drew Scott’s son with his wife, Linda Phan] gets older, it’s gonna be one big happy family.”

Jonathan and the New Girl alum, 42, publicly debuted their romance in October 2019 after they met on the set of Carpool Karaoke alongside their respective siblings: Drew, 44, and Emily Deschanel. The Canada native has since become a “bonus dad” to Elsie, 7, and Charlie, 5 — whom Zooey shares with ex-husband Jacob Pechenik — after he previously had a feeling that fatherhood was in his future.

“We were filming one of our shows in Toronto and we wrapped filming, and we threw a party for all of our crew,” he recalled to ET on Wednesday. “We had a tarot card reader at this party that we thought, you know, ‘This’ll be fun. Everybody will enjoy.’”

He continued: “When she was doing my cards, she’s like, ‘Ah, yes. You will be a father within the year.’ And I’m like, ‘[You’re] missing some key information, there’ [because] I wasn’t even dating anyone at the time. Three months later, I met Zooey. We then started dating, never even thought of it until all of a sudden — I was the insta-dad.”

The (500) Days of Summer actress previously gushed over Jonathan and Pechenik, 50, in a joint Father’s Day tribute earlier this year.

“So thankful my kids have these two awesome guys in their lives: @jonathanscott and their dad @jacobpechenik,” Zooey captioned a rare family photo of her daughter and son with the film producer and Jonathan in June.

The Elf star and the Texas native were married for nearly four years, welcoming Elsie and Charlie in 2015 and 2017, respectively. Us Weekly confirmed in September 2019 that the pair split before their divorce was finalized nearly one year later.

“After much discussion and a long period of contemplation we have decided we are better off as friends, business partners and co-parents rather than life partners,” the now-exes told Us in a statement at the time. “We remain committed to our business, our values and most of all our children. Thank you for respecting our privacy at this time.”

Following their split, Zooey moved on with the HGTV personality. As their romance blossomed, they even built their “dream” home in California.

“I just think Jonathan is just the nicest person in the world,” the actress exclusively told Us in June 2021. “So, I’m just really lucky. I just try to be as nice back as, you know, he is. And it works. … I have the best boyfriend in the world!”

In addition to helping coparent his love’s two children, Jonathan also hopes to be the “cool” uncle to his brothers’ little ones.

“When [Parker] gets a little older, I’m gonna spoil that kid,” the It Takes Two coauthor jokingly told ET of Drew’s little one, who was born in June. “[I’ll] get him all hopped up on sugar [and] send him home. It’ll be great.”