He was introduced to the crowd as “an unpretentious man”, and Scott Morrison certainly lived up to that description in his functional but flat address to the Sydney Institute annual dinner on Monday.

The Gerard Henderson-led organisation has somehow turned its yearly lecture – which it describes as “the leading intellectual event of its kind in Australia” – into a veritable night of nights for the country’s business and political elite. 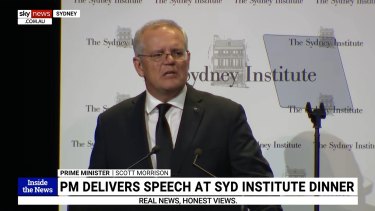 But Morrison, we were told, did not answer to the type of people assembled in black tie inside The Star’s grand ballroom. Superannuation Minister Jane Hume – in what some observers took to be an audition for Morrison’s next cabinet – introduced her leader as someone who “like John Howard before him” connected with middle Australia.

“They like that Scott Morrison is an unpretentious man, respectful of the office but unfazed by its trappings,” she said.

“[He is] answerable not to big business, not to unions, not to other nations with notions about Australia’s place in the world, or to big tech corporations who may wish to define how we live.

“And certainly not answerable to the well-heeled and bored who play pied piper to the disaffected. Nor to single-issue trustafarians, Australia’s new bunyip aristocracy, on some inverted vanity project, who wouldn’t recognise Menzies’ forgotten people, Howard’s battlers or Scott Morrison’s quiet Australians if they sat up in their quinoa.” 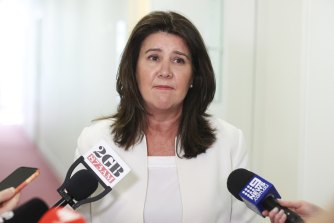 It was a striking list of constituencies the government is explicitly uninterested in serving, and it was probably the rhetorical highlight of the night – not that there was much competition once the man himself took the stage.

As an indicator of how he may frame the election campaign, Morrison’s speech was insightful. He repeated his lines about governments needing to step back after their unprecedented interventions during the pandemic. He talked about saving lives and livelihoods. He invoked “Team Australia”, waxed lyrical about co-operation and togetherness, and indulged in a folksy tribute to what he called the “quiet confidence” of Australians.

By the time we go to the polls, this will be a nearly nine-year-old government asking for re-election. Some would say it is tired. But Morrison will brand this as experience. It was a good thing that when the pandemic hit, “it was not our first rodeo”, he said. There will be more challenges in its aftermath and “you don’t want to leave that to those who’d be learning on the job”.

In recent weeks, members of the government have become overly fond of car metaphors. Morrison speaks of looking through the windscreen (to the bright future) not the rear vision mirror (to the dark days of lockdowns). Hume, introducing her boss, said he had “steady hands on the wheel, two eyes on the horizon, feet on the ground”.

And that’s how Morrison’s team wants voters to see him: the safe driver up the front of the Volvo who looks a bit like John Howard.

Which probably explains why – even in a ballroom of friends and fellow travellers – the whole show fell a bit flat. Morrison got a big, early laugh by joking that after three years of floods, fires, drought, pandemic and even a mouse plague, he had turned to Josh Frydenberg in cabinet and said: “I think it’s time we let your people go, Josh.”

But after 20 minutes, attention had started to drift. This was not one for the true believers, nor for insiders and policy wonks hungry for a bit of meat. It was a campaign stump speech dressed up for the occasion with a bit of lippy and a bow tie.

Morrison may not have brought the house down, but in a way, it would have been weird if he had. He’s not the flashy showman, the slick speaker or the smooth charmer. And apparently that – in Hume’s estimation at least – is why Australians like him.

By 10am the next morning, while lots of Liberals were still nursing hangovers from kick-ons at The Star’s BLACK Bar & Grill, Morrison had already flown to Melbourne and was touring the Doherty Institute, cameras in tow.

It’s going to be a long campaign.