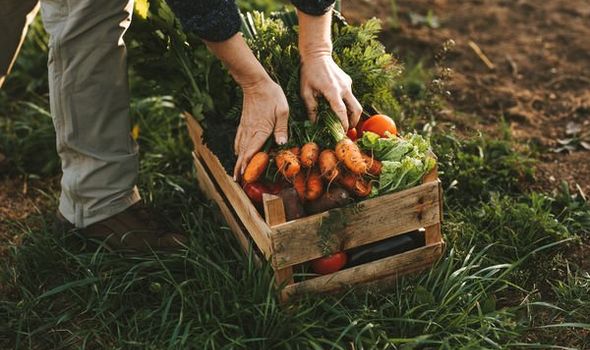 It says poor diets contribute to 64,000 deaths a year in England alone, costing the economy £74billion.

Report author Henry Dimbleby said: “The way we produce food is doing terrible damage to the environment and to our bodies, and putting an intolerable strain on the NHS. Covid-19 has been a painful reality check.

“Our high obesity rate is a major factor in the UK’s high death rate. We must seize the moment to build a better food system for our children and grandchildren.”

The report sets out how our diets will need to change in the next 10 years to meet the Government’s targets on health, climate and nature.

By 2032, fruit and vegetable consumption will have to increase by 30 percent and fibre by half, while diets of food high in saturated fat, salt and sugar need to fall by a quarter, and meat consumption by 30 percent.

The independent report, commissioned by the government in 2019, also calls for the introduction of the world’s first Sugar and Salt Reformulation Tax.

Environment Secretary George Eustice said: “This Government will carefully consider its conclusions and respond with a White Paper within six months, setting out our priorities for the food system.”

Food inglorious Food. Our diets are killing us and the world we live in. Processed food and factory farming of animals are the twin problems.

In Britain, we raise and kill one billion animals a year in factory farms. We eat historically enormous amounts of meat and dairy – we’re told it’s good for us, but it isn’t.

Animal products are driving a human health crisis – most of the chronic illnesses that affect us in later life are linked to eating meat and dairy – heart disease, cancer, diabetes for example – these can’t be cured, only managed until death. There’s a considerable loss of life quality along the way. And a huge cost to the NHS and to our economy.

It’s not good for the planet either – it’s one of the big three drivers of the Climate Crisis (along with Energy and Transport) and is the biggest single driver of habitat loss and wildlife extinction. This is not just happening somewhere else in the world, like the Amazon – we’ve destroyed Britain’s amazon already – 97% of our wildflower meadows in the last 50 years. Meat is not murder – it’s murder/suicide and ecocide all in one. And one man’s meat is every man’s poison, it’s not like free speech – it’s not a basic human right.

It’s reversible though – if we stop eating factory-farmed animals we could free up 75% of all farm land in our country, that’s half of our entire landmass that we could give back to native wildlife, birds, bees, otters, and even beavers. We’ve just had the first wild beaver born in Britain for 400 years.

Processed food is the other villain of the piece. Its three staple ingredients are Salt, Sugar and Fat – and they are used in poisonous quantities. Because they create food addiction, they make normal food taste bland. It should be illegal. When we see food like this in the shops it’s natural to think it must be OK, it’s endorsed by being legal and now ubiquitous.

And we have massive food disparity – half the country is obese while millions of Britons struggle to feed their families. And, incredibly, we throw away about half of all the food produced.

We need government intervention, to protect us from the food industry.

They are poisoning us and the planet.

Oscar-winner Olivia Colman is backing a film that calls for parts of the English countryside to be returned to the wild.

The Favourite actress is one of a string of celebrities to throw their weight behind Deserves To Bloom – a yet-tobe-released short film, starring poet Safiya Kamaria Kinshasa as Mother Nature.

It was made to support rewilding charity Heal, which is on a mission to return a site to nature in every county in England. Olivia, 47, said: “It has never been as important to care about our planet…and to fight climate change. The work of this amazing organisation will create new places for wild creatures to live safe from harm and help vulnerable species to recover.

“It will also allow future generations to experience a world full of beauty.”

Hugh said it was “a powerful appeal for us all to respect the planet and its wildlife”.