Federal MPs have been urged to continue working with their communities undeterred despite concerns for their safety following the murder of British MP Sir David Amess during a regular public meeting with his voters at the weekend.

Home Affairs Minister Karen Andrews met with the Australian Federal Police Commissioner Reece Kershaw on Tuesday after half a dozen Coalition members raised concerns about the safety of their colleagues and staff members in their weekly party room meeting. 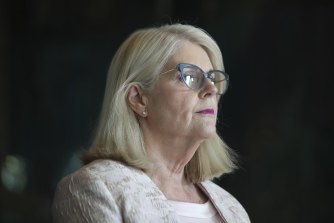 Aggressive and violent incidents involving federal MPs have led to a spike in referrals to national security agencies in the past few years, with parliamentarians from all sides of politics warning Australia’s increasingly toxic political debate could lead to tragic consequences.

Ms Andrews said the pair discussed the security arrangements for parliamentarians, especially in their electorates, and opportunities for MPs to improve their understanding of risks and strategies while working in the community.

She said the attack was also an attack on democracy and on everyone who valued the fundamental importance of representative government and its democratic institutions.

Counter-terrorism police in the UK have formally declared the fatal stabbing of Sir David an act of terrorism, with the man arrested, Ali Harbi Ali, the son of a former director of the Somali government’s media and communication department.

Ms Andrews, who oversees Australia’s policing and law enforcement agencies, told Federal Parliament the murder of an elected official was a “despicable crime” and the murder of the 69-year-old Conservative MP from Essex, was “doubly so” because it occurred while he was meeting with his constituents.

“He would, no doubt, be proud to know that his murder will not deter us from our important work –meeting with and listening to our constituents, representing our communities, and settling political issues through discourse and debate,” Ms Andrews told the House of Representatives on Tuesday.

“I would say to my fellow members – on both sides of this House, and further afield in the UK – do not let this attack deter you from your important work in the communities we serve.”

“Terrorists seek to create fear and division in our communities; their ultimate aim is to destroy the ties that bind us together as a nation. There is no greater refutation of their ideology – nor proof of their impotence – than the free, open, and transparent debate that occurs in this place.”

Ms Andrews said lone actor attacks could be motivated by a range of “hateful ideologies” and the government was committed to addressing the full spectrum of extremist threats, regardless of political, religious, social, cultural or issue-specific ideology.

The killing came five years after Labour MP and mother-of-two Jo Cox was assassinated at the age of 41 by a far-right terrorist, who shot and stabbed her outside her North Yorkshire ‘surgery’ of one-on-one meetings with constituents.

The only Australian politician to be murdered while in office was NSW state MP John Newman, who was shot dead in a drive-by attack outside his house in Cabramatta in 1994.

Ms Andrews said speaking with constituents and hearing their concerns was “a privilege we must not shy from” and remain “clear-eyed” that terrorism remained “a real and enduring threat”.

“Make no mistake – this was an attack on Sir David, but it was also an attack on democracy, and on all of us who value the fundamental importance of representative government and its democratic institutions.