The King and Queen Consort acknowledged members of the public this morning as they made their way to Crathie Church in Balmoral to attend a Sunday service.

King Charles, 73, appeared somewhat emotional as he waved at well-wishers from his Rolls Royce, as it passed through the roads close to the Balmoral estate.

Today marked the second time Charles and Camilla, 75, have attended church since the seven-day period of private mourning ended for the Queen on September 26th.

The monarch wore a tweed blazer and waistcoat and a striped green, blue, black and yellow tie for the outing. 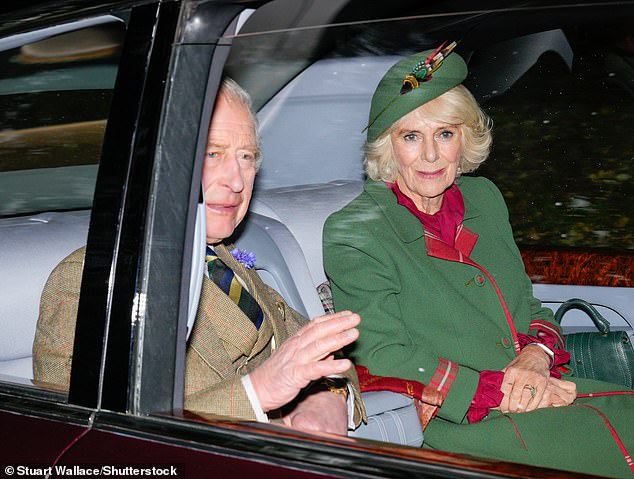 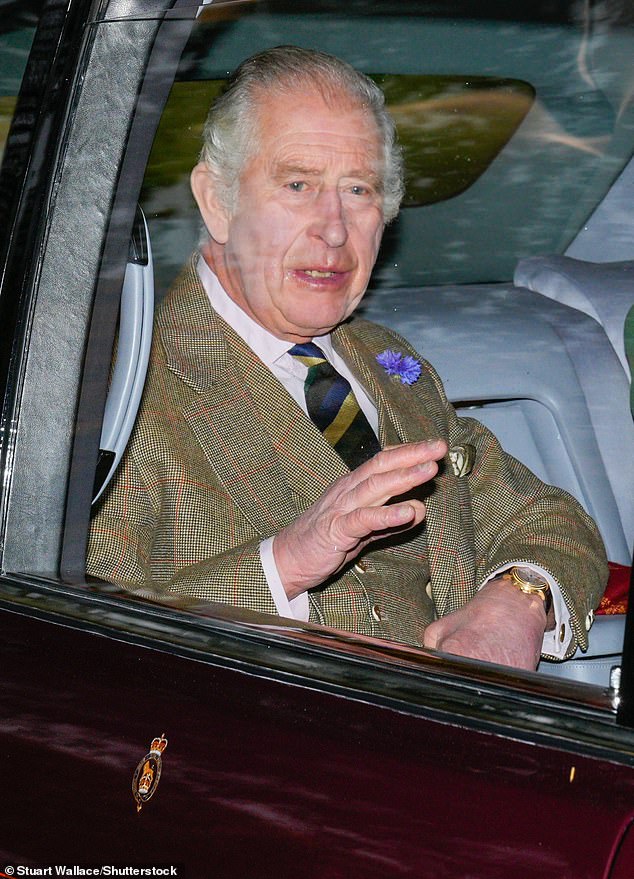 Meanwhile, the Queen Consort opted for a green coat with red trim, finishing her ensemble with a matching hat boasting a feather cockade.

On Friday night, Camilla attended a dinner to launch the first ever Braemar Literary Festival at The Fife Arms hotel in the Highland village.

Ending today, the three-day festival celebrates the works of bestselling authors alongside visual artists, spoken word performers, singer songwriters, scriptwriters, critics and publishers alike, reflecting the many ways in which the ’literary’ creatively enhances our lives.

The event is held in collaboration with The Reading Room, the book club founded by Camilla. 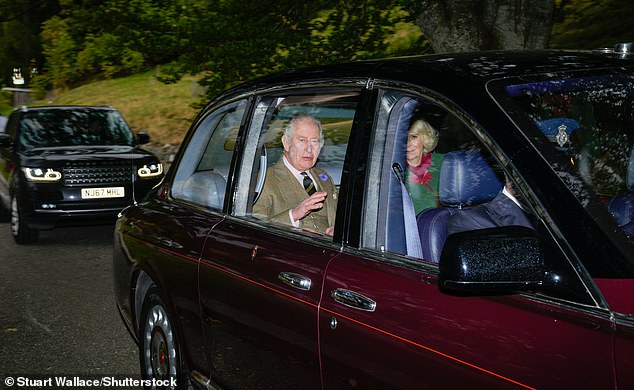 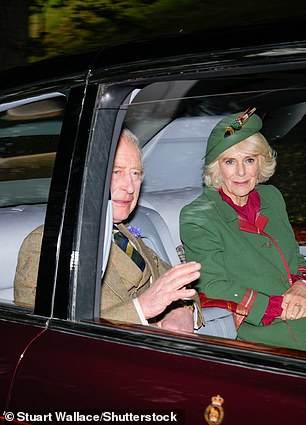 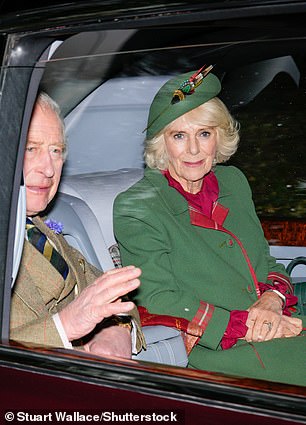 Charles donned a tweed blazer and waistcoat for the outing, meanwhile, Camilla opted for a green coat with a red trim

First launched in January 2021, the online literary hub was inspired by the success of the then Duchess of Cornwall’s reading lists shared during the pandemic in 2020. It offers book recommendations and exclusive insight from the authors themselves.

Camilla, who donned a blue, long sleeve dress for the event, appeared in her element as she chatted to guests – including British author Sebastian Faulks, The Reading Room Director Vicki Perrin and Scottish poet and writer Jackie Kay.

‘This inaugural festival promises to be an exciting event bringing together the Braemar village community, guests of The Fife Arms, The Reading Room and lovers of literature everywhere,’ said a statement from the event organisers. 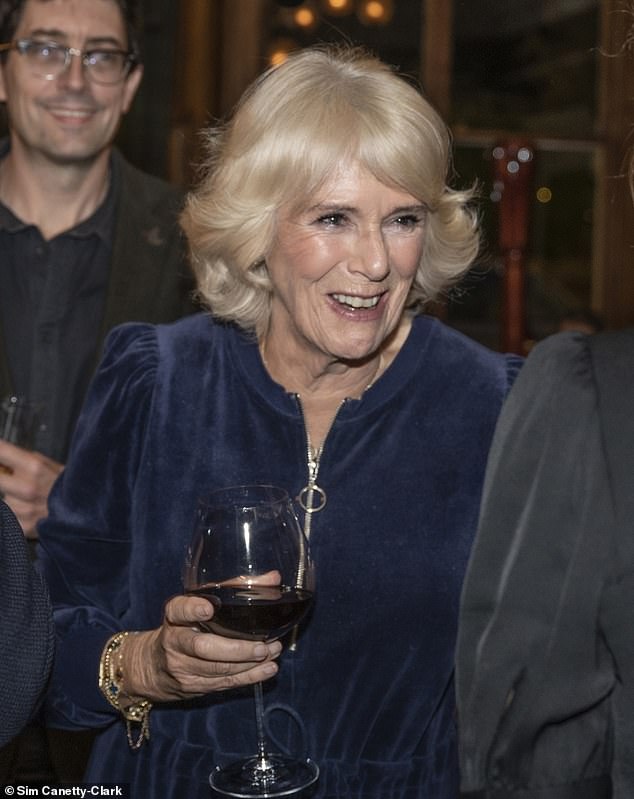 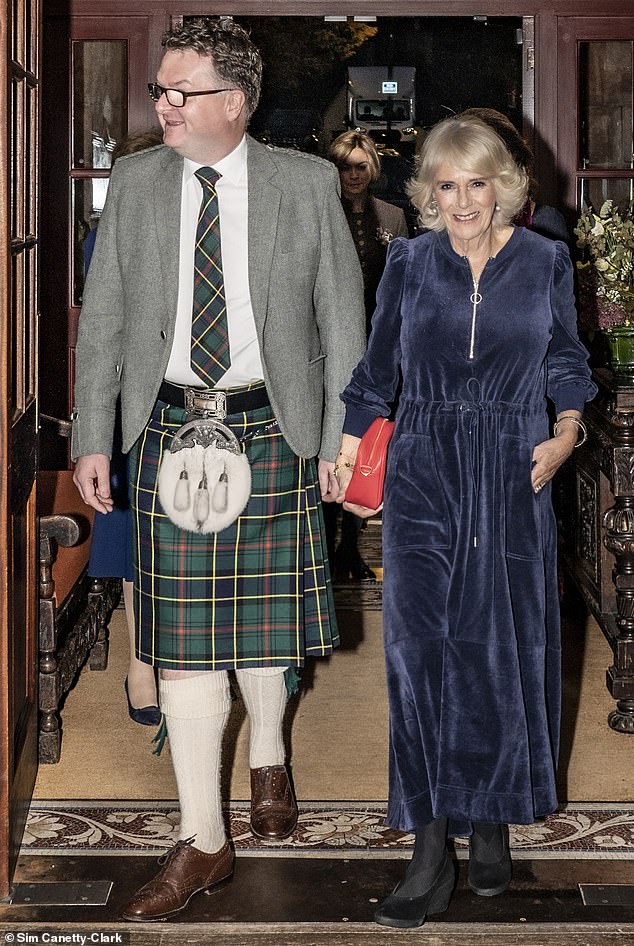 King Charles III’s wife, 75, oozed elegance in a blue, long sleeve dress when stepping out at The Fife Arms hotel on Friday night

The Queen Consort’s outing comes after she delighted followers on her Reading Room Instagram account by revealing the four novels she’s recommending this autumn.

Now in its eighth season, the club’s latest books are designed to ‘warm your hearts and chill your bones’ – with Bram Stoker’s Dracula clearly a nod to Halloween on the horizon.

The Whalebone Theatre by Joanna Quinn was also included, as well as The Book Thief by Markus Zusak and City of Girls by Elizabeth Gilbert.