The great con of On Becoming a God in Central Florida (SBS, Thursdays at 9.30pm) is that it makes you want Krystal Stubbs (Kirsten Dunst) to succeed even as you're hoping the thing she's trying to succeed at will fail.

Krystal is an aspiring champion of a pyramid sales scheme called FAM (Founders American Merchandise). Ostensibly FAM sells a range of household items – toilet paper, soap, toothpaste – but really the product is both simpler and grander than that. It's the American Dream. 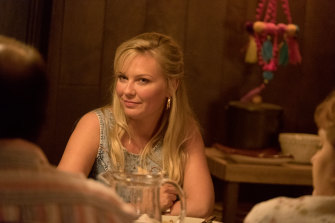 Kirsten Dunst as Krystal Stubbs in On Becoming a God in Central Florida.Credit:SBS

Work hard, be your own boss, own your own boat/mansion/slice of paradise (tick whichever box applies; hell, tick 'em all if you want). That's what this pyramid scheme (and, arguably, all such schemes) is about. The physical product is almost irrelevant.

When we first meet Krystal she's not exactly a signed-up, card-carrying disciple of the teachings of Obie Garbeau II (Ted Levine), whose motivational wisdom is dispensed via cassette tape (it's 1992) for a small but entirely reasonable fee. But her husband Travis (Alexander Skarsgard) is.

A former alcoholic, he's replaced one addiction with another – only his latest fix is far more damaging. He's double-mortgaged the house, defaulted on the bills, and ordered a truckload of FAM merchandise he simply can't shift in order to make his bottom line look much better than it really is. He's running a scam of his own, only he's the one paying the price. Wham bam, thank you FAM.

Krystal has no idea her husband has run the family finances into the ground while chasing blue-sky until he quits his job, falls asleep at the wheel (in his brand new tuxedo, bought especially for the job-quitting moment, as per FAM orders), and drives into a swamp. Luckily, he gets out of the car alive; unluckily, an alligator chomps him to death as he does so. 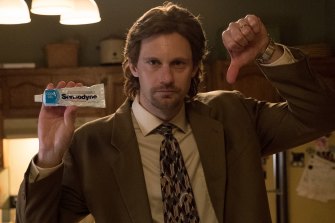 Travis Stubbs (Alexander Skarsgard) in On Becoming a God in Central America.Credit:SBS

That leaves Krystal with a baby, a minimum-wage job at a water park, and a mountain of debts. Oh, and a truckload of FAM product, and a local area manager, Cody Bonar (it's Bow-nar, not Boner, he regularly tells people), who insists she take over her husband's business.

There's no question which way Krystal's trajectory is heading, but it's a slow crawl to start with. I've seen the first four episodes in this 10-part series (a second season has already been commissioned) and we're still firmly stuck in the rags part of the to-riches journey. That might be just as well; I'm not sure I'll like Krystal once she starts bedazzling.

Tonally, it plays as slightly off-kilter dramedy rather than straight drama or outright comedy. Executive-produced by Grant Heslov and George Clooney through their Smokehouse Pictures, there's a faint echo of the pair's Catch-22 about it all, though it's nowhere near as dark.

Writer-creators Robert Funke and Matt Lutsky want us to recoil at this corruption of the spirit of free enterprise – where the only thing being sold is selling itself – but not so much that we won't come back for more. And mostly it works. 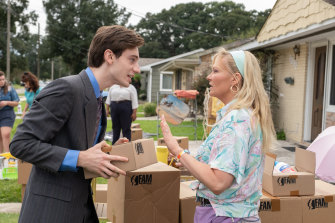 As Cody, Theodore Pellerin is almost the embodiment of the show – repulsive yet fascinatingly so. A scene in which he practices his dance moves for a sales rally while an acolyte follows him around with a mirror is just perfect.

The quiet despair of Ernie (Mel Rodriguez) – Krystal's neighbour, friend and supervisor at the waterpark – serves as counterpoint to Krystal's simmering rage. Both are grist to the mill of the FAM scam but only one will provide the propulsion required to reach the top.

Of course, getting there might just require Krystal to scale a mound of bodies. Stacked the right way, they'd probably make a pyramid.