Labor has suffered a stunning defeat in the previously safe western Sydney seat of Fowler after locals rejected an attempt to “parachute” high-profile ALP candidate Kristina Keneally into the electorate.

However, the party was celebrating picking up the marginal Liberal-held inner west seat of Reid and holding on in Parramatta despite a controversy over eastern suburbs resident Andrew Charlton being chosen over several grassroots local contenders.

The fiercely contested seat of Bennelong was on a knife-edge as the Liberal Party suffered a significant swing against it in John Howard’s former seat.

The issue of well-known white candidates being preselected over non-white locals became a running theme of the election campaign, threatening to spark a backlash against Labor in Sydney seats seen as crucial to its path to victory.

Keneally, a former NSW premier, faced an energetic contest from Fairfield deputy mayor Dai Le. The former Liberal state candidate capitalised on frustration at Keneally relocating to the area from the Northern Beaches, including among the electorate’s sizable Vietnamese-Australian community.

Labor suffered a thumping 18 per cent swing against it in Fowler, with Keneally trailing Le 46-54 on a two-party preferred basis.

While not officially conceding defeat, Keneally acknowledged to Labor supporters in Fowler that the night had not been the celebration they had hoped. She said that “in the days and weeks ahead we’ll have to look at what’s gone on here in Fowler and in seats around the country”.

“Whatever happens tonight, I’ll be fine,” she told Sky News. “What we need to focus on is we have an Albanese Labor government.”

Former Labor MP Chris Hayes, who announced his retirement last year, won the seat with a comfortable 14 per cent margin at the 2019 election.

Hayes had wanted Tu Le, a Vietnamese-Australian lawyer, to succeed him in the seat, but Le was pushed aside for Keneally when her Senate position came into doubt.

Dai Le, who arrived in Australia as a refugee from Vietnam, said locals in Fowler felt “insulted” and taken for granted by Labor.

“It was a huge challenge to win the seat of Parramatta, and tonight we met that challenge,” Charlton told Labor supporters at his celebration party.

“When I was first preselected I said to be your candidate for Parramatta was the honour of my life, and tonight that honour has turned into a responsibility.” 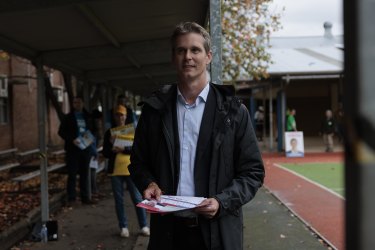 In a major victory for Labor, Sally Sitou picked up the seat of Reid, which includes the suburbs of Homebush and Concord, with a swing of 7 per cent.

Sitou spoke out early in the campaign against people saying she should not run for parliament because of her Chinese heritage. She later gained national prominence when her Liberal opponent, Fiona Martin, appeared to confuse her with Tu Le, the Vietnamese-Australian candidate overlooked by Labor in Fowler.

Sitou arrived to cheers of applause from Labor volunteers at a party in Five Dock on Saturday night where she declared victory.

“This moment is surreal in the best way possible. That one could dare to dream a dream this big,” Sitou said.

“This community has voted for fairness, for integrity in government, and for a better future for all.” 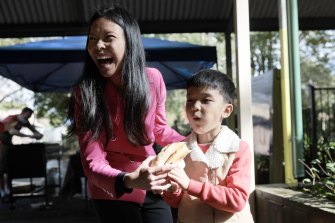 Speaking earlier on election day, she said: “The magnitude of my candidacy has hit me today. I think there’s something really special to be said about this country when the daughter of migrants, Chinese-Australians, can run for our parliament in a critical seat like this.”

In Bennelong, Liberal candidate Simon Kennedy and Labor’s Jerome Laxale were locked in a 50-50 split result in one of the closest contests in the country.

The Liberal Party suffered a 7 per cent swing against it in the seat, which was previously held by popular local member John Alexander.

The Coalition’s combative rhetoric on China appears to have cost it votes in the seat where 21 per cent of residents have Chinese ancestry. 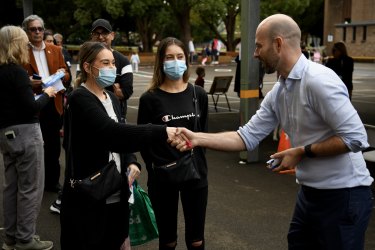 “The drama will continue into tonight and well into tomorrow,” Kennedy told a crowd of Liberal supporters on election night.

Liberal frontbencher Michaelia Cash said the party’s preselection dramas in NSW had hurt the party in Bennelong, given Kennedy was only announced as the party’s candidate in late March.

“I think that it would have been nicer if we had a lot of candidates on the ground a lot earlier,” she said on Channel Seven.

“In saying that, when you look at Bennelong and you look at the name recognition that John Alexander had …having him decide to step aside, you just do get automatically that transfer of vote.”

Cut through the noise of the federal election campaign with news, views and expert analysis from Jacqueline Maley. Sign up to our Australia Votes 2022 newsletter here.