The brilliant, cosmopolitan Australian painter John Wardell Power, who joined Paris’s avant-garde scene in the 1930s, was long ago consigned to obscurity. Abandoning a medical career for life as an artist, he studied under Modernist pioneer Fernand Léger and exhibited in Europe and the United States yet his achievements were ignored at home.

Decades after his death in 1943, little has changed. No major art institution in the country has held a significant exhibition of his work. The first and only Power show outside the confines of his alma mater, Sydney University, was held at the National Library seven years ago. 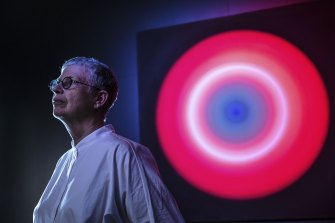 Curator Ann Stephen with a work from Light & Darkness.Credit:Brook Mitchell

But Power was also a man of immense inherited wealth who left a great legacy to the arts. On the death of his wife, Edith, in 1962, as directed in his will, the bulk of his estate was bequeathed to the university to “bring the people of Australia in more direct touch with the latest art developments in other countries”. Its estimated value at the time was £2 million, a princely sum that funded the establishment of the university’s fine arts department as well as the Museum of Contemporary Art, the JW Power Collection and the Ramingining Collection of Aboriginal Art. 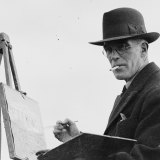 Artist John Wardell Power painting at his easel in NSW in the 1930s.

For the first time, the passions of artist and benefactor can be seen side by side in two shows: Light & Darkness, a survey of work from Power’s eponymous collection of art from the 1960s to the 1980s, and a companion exhibition of Power’s own paintings and sketches.

For its curator, the creation of Light & Darkness was an exercise in searching for buried treasure.

Until the arrival of the Chau Chak Wing Museum in 2020, the JW Power Collection was a “lost collection”, with no permanent home, and its catalogue of 1500 works by international stars such as Robert Rauschenberg, Richard Serra and Bridget Riley languished mostly untouched for decades in a warehouse in the inner-west.

Some of the works in the show, like the four-metre-long Untitled, series b by John Golding – which had been rolled on a drum in storage – haven’t been seen for 50 years. “It’s like a time capsule,” Stephen said. “Now that we have the new museum we’ve been able to bring out of storage some of these treasures.”

On its path through the decades, Light & Darkness is a vibrant, visual tour through the big international art movements of the late Modernism era. It opens with a rocking mechanical “junk sculpture” by Swiss artist Jean Tinguely and traverses the buoyant age of Op art with canvases resplendent in dots and dashes by the likes of Riley, French-Hungarian artist Victor Vasarely and Germany’s Günter Uecker.

Inside a black room, a collection of light works such as the pulsating Chromosphere, by English artist Peter Sedgley, flash brightly in multicolour. As the show continues along its timeline, the tone blackens, reflecting a growing bleakness in society after the Vietnam War, and “a kind of dystopian mood begins to rupture the idealism – the joy, the play”. Enter New Zealand’s Colin McCahon and Australian Imants Tillers.

Like a United Nations of art on home turf, Light & Darkness upholds Power’s wishes. “The vision of Australia being a cosmopolitan culture is what he would have enjoyed,” Stephen said.