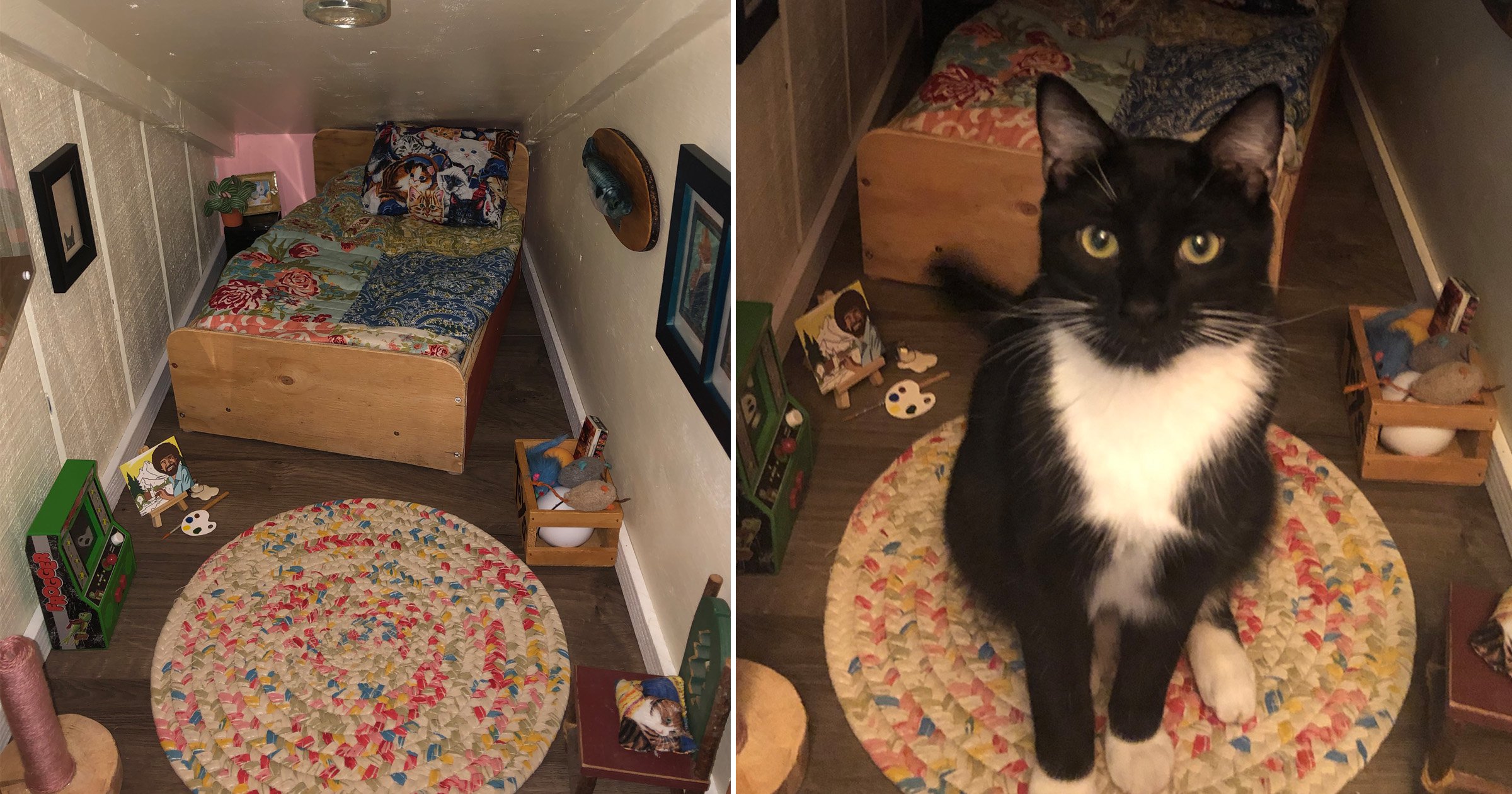 Hey, hi, how are you doing, what have you been up to lately?

Oh, you’ve been doing some DIY? A little bit of crafting?

Not to make you feel like a complete failure, but we’re confident that whatever creative work you’ve been doing in lockdown pales in comparison to this masterpiece.

Behold: a tiny bedroom hand-crafted for a cat.

Wyatt the tuxedo cat is the lucky feline residing in this property, built by his owner Bryan Davies, 50, who lives with wife Jessica in Shingleton, California.

The couple, who have no children, love spoiling their pet – so decided to go all out when it came to giving Wyatt his very own room.

The project didn’t cost a lot – just £14 in total – but the end result is glorious.

Along with a tiny bed, rug, artwork, and rug, there’s even a mini TV, so Wyatt can watch his favourite shows.

Thankfully, the cat loves his new room, and has been spending lots of time lounging inside and watching TV.

‘Our elderly cat Percy passed away in 2019 at the age of 18 and we were devastated,’ said Bryan.

‘A year later, while we were not looking for another pet, Wyatt found us.

‘Last autumn while we were donating to a local pet rescue thrift store, I noticed my wife cosying up to a kitten in a cat tree in the corner.

‘Twenty minutes later, he was home and part of the family.

‘Wyatt loves to watch the birds and squirrels in the forest through our windows, but with winter coming he didn’t find enough of them out and about to entertain him.

‘So we found various YouTube videos of birds and mice and other enticing animals.

‘But our TV is rather large so the proportions weren’t right for him and he had to sit too far away for his taste.

‘He also wanted to pounce at the screen, so it wasn’t the best arrangement.’

The idea of making Wyatt his own room came to the couple when they were remodelling their own bedroom, which has a steep slanted roof that creates an awkward space.

‘Our roof has a very steep angle because we get a lot of snow in the winter,’ Bryan explained.

‘Because of this and an awkward but necessary window placement, a small and virtually unusable space was created in the bedroom.

‘We thought at first we could use it for storage but with Wyatt’s television viewing habits on our minds, we were struck with inspiration.’

Bryan found his old Kindle Fire tablet, crap lumber and paint, and flooring and then set about building Wyatt his very own room.

He said: ‘We first insulated and covered the walls and roof with leftover materials from the bedroom remodel, and it became clear this was becoming a miniature version of our actual bedroom.

‘While I was building his bed from pieces of scrap wood, my wife was making his wall art.

‘She made tiny frames from cut pieces of fabric of fancy cats, and even made a smaller version of a piece of art that we have of a black cat.

‘Of course, she also put in a photo of me and her – a ridiculous one we took during quarantine of us recreating the painting American Gothic.

‘We also took one of his stuffed fish toys and mounted it to a plaque as though he caught himself a trophy.’

Jessica cut up old pillows to use as a mattress and used a matching pillow to create a bedspread.

For the finishing touches, the couple used scrap wood to make a mounting frame that they could attach the Kindle to, so that it was out of Wyatt’s reach but within his view.

Bryan said: ‘I screwed a dollar-store plastic picture frame to the wooden mount as a screen protector.

‘He can smash it with his paws all he wants now and the worst thing that happens is he pauses the video – which is like he caught his prey.’

And Wyatt is so pleased.

Bryan said: ‘He goes in his room, stares at the blank screen and meows a few times to get our attention.

‘Sometimes he will nap on the bed but mostly he uses it as a place to watch TV and store all of his toys and favourite objects, like pistachios we can’t open – his absolute favourite things of all time.’

Do you have a story to share? We want to hear from you.

Get in touch: [email protected]