They’re posted at train stations, cafes and all over Instagram. But after years of lapping up ‘live, laugh, love’ platitudes, Marianne Power admits… Inspirational quotes make me want to scream

This is the first sentence of the rest of your life! Everything you want is waiting for you! It’s all happening perfectly!

How do these lines make you feel? Do they make you want to conquer the day? Go forth and climb a mountain . . . or at least the stairs to clear out a cupboard? After all, as the Dalai Lama, or Einstein, or maybe Mother Teresa tells us: ‘The journey of a thousand miles starts with just one step . . . and a good declutter.’

Or does this kind of motivational guff make you want to punch something?

For years I was a fan of the inspiring messages that were popping up everywhere. On pavements, written in colourful chalk. On whiteboards in the entrance of train stations. On chirpy A-boards outside coffee shops. I would read them, smile and feel a bit brighter. 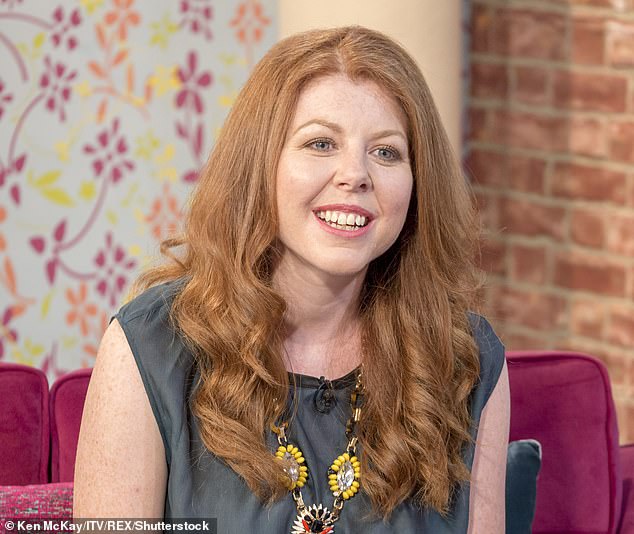 I read dozens of self-help books that offered an abundance of similar messages — usually written in capital letters with exclamation marks. But just to ram the point home I’d underline sentences and write ‘This!’ in the margin. In fact, I was so enamoured that I lived by the advice of self-help books for a year and wrote my own book about it.

But something happened during the pandemic: I noticed that far from pepping me up, motivational quotes were making me, well, miserable.

It started as a gentle irritation at the smug, all-knowing tone and Hallmark platitudes. It felt like these messages were taunting me, highlighting the difference between where I was and where I felt I ‘should’ be.

Yes, I knew I should ‘stop focusing on how stressed you are and remember how blessed you are’, but what if I just wanted to stay in bed and cry?

I got emotional whiplash from messages telling me what to do. Should I ‘live, laugh, love’? Or should I ‘get rid of the toxic people’ in my life?

Over the past few months, my irritation has turned to rage. ‘I become something, then nothing, then everything, but always remain myself,’ says one quote on my Instagram feed. I want to shout at my phone: ‘What does that even mean?’

‘Never doubt that a small group of thoughtful committed citizens can change the world; indeed, it’s the only thing that ever has,’ says another. But are we really changing the world while posting motivational quotes on social media?

Even quotes from The Boy, The Mole, The Fox And The Horse, by Charlie Mackesy — which I adore — became grating. 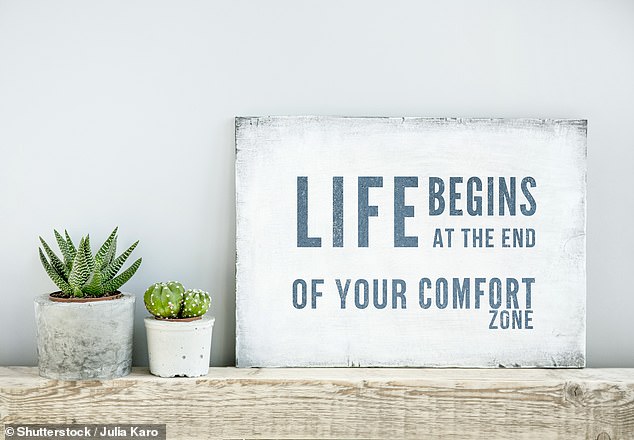 This book of charming illustrations and motivational messages about life and the friendship between a boy and his animal friends is so popular that two years after its release it remains in the top five hardback bestsellers. It used to bring tears to my eyes. Now it makes me roll them.

And it’s not just me who has had enough. Parodies of the beloved book, which has sold a million copies, are now popping up. The Panda, The Cat And The Dreadful Teddy features a swearing panda who is driven mad by a teddy bear who keeps uttering banal inspirational quotes.

One features Teddy telling Panda: ‘“I think it’s so important to be kind.” “Do you Teddy?” asked Panda, just before he pushed him out of the tree.’ That made me laugh.

My top five most toe-curling phrases

They’re not. I live alone and dance in the kitchen.

Tell that to someone in a refugee camp.

Can’t I just stay here on my sofa?

But what if I never wanted it to happen in the first place?

Written by someone sharing motivational quotes online at midnight.

Another parody — The Woman, The Mink, The Cod And The Donkey, by Margerie Swash — is about a woman’s desperate journey to find a pub post-pandemic.

So have we all finally had enough of motivational quotes? Has the backlash begun? Or is there value in these quotes?

Psychologist Dr Meg Arroll says: ‘There is some evidence that affirmations can help when they actively challenge negative thought patterns, but these very quick techniques often just paper over the cracks if that’s all someone relies on for their mental health. The danger is that when these quotes don’t magically make you feel better, it’s easy to blame ourselves because everyone else online seems to be transformed. This results in a gap between reality and our expectations.

‘We know that gratitude is beneficial to mental health, for example. But it’s possible to be grateful and still feel that we’re struggling a bit. Motivational quotes do not allow for this complexity.’

What’s more, reading these quotes can make us feel alone.

Dr Arroll adds: ‘When you see a post getting thousands of likes, you believe it’s working for everyone else, so why not you? This can make you feel like an outsider and isolated, when we are already isolated.’

I have felt this. I imagine that the person sharing the quote has their act together in a way I don’t; that everyone else has managed to make lemonade from the lemon this virus has been while I was limping through.

But is that true? Is the person telling me to seize the day, also sitting in their pyjamas like me? As my friend jokes: ‘It’s never your successful friends who are posting inspiring quotes.’ Maybe it’s the opposite. I know that when I share a motivational quote — which I do, often! — it is not because I think I have mastered the message. It’s because I need more than ever to remember it. 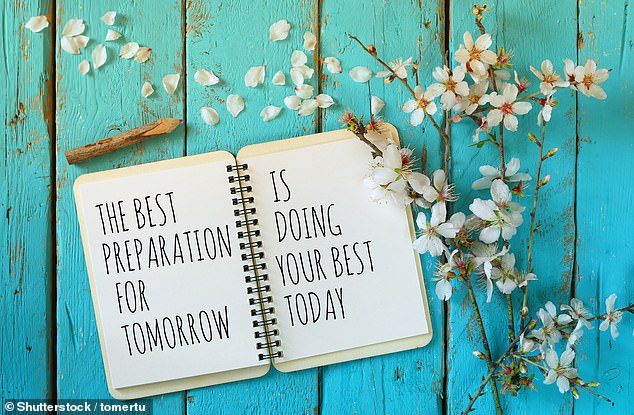 Marital therapist Andrew G. Marshall said if you are using a quote as tool for growth, you can think about one quote and contemplate it all day (file image)

Which leads me to another problem. I don’t remember these nuggets of wisdom. I read them, think: ‘Oh yes! That’s it! The answer to everything!’ Then they go right out of my head.

And that’s what happens when we take these quotes out of context. If we read them in a book or a poem, there is time for the message to sink in and have an impact. Read online or on chalk boards, however, and it’s like a quick sugar high instead of a nutritious meal.

Which is why marital therapist and host of The Meaningful Life podcast, Andrew G. Marshall, believes it is not the quotes that are the problem but the way we are consuming them.

‘If, however, you are using them as a tool for growth, you can think about one quote and contemplate it all day. You can turn quotes into a question. I’ve spent six months pondering a line in a Robert Frost poem — ‘The best way out is always through’. I ask myself, what does that mean? How do I avoid doing that?’

He recommends that if you see a quote that speaks to you, think about it in depth. In this way, even a quote like ‘find your bliss’ can be unpacked over days or weeks. What is stopping you from finding your bliss? What is your bliss? 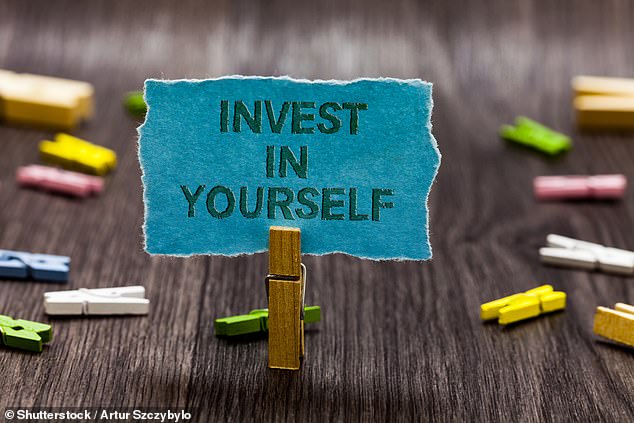 He explains that it’s part of human nature to contemplate life and seek solace. Think about aphorisms stitched to your grandmother’s cushions, or nuns and monks going into retreat to ponder lines from the Bible. We have turned to the wisdom of philosophers for centuries.

But perhaps you can have too much of a good thing.

For now, I think I might go cold turkey. I am ditching online quotes for old-fashioned books where the wisdom is dispensed slowly and with nuance. Books that acknowledge that life is hard and there are no easy answers — certainly none that can be put in one sentence printed on top of a photo of a mountain.

I have surprised myself by becoming a fan of poetry. And after years of trying to be a Pollyanna, I am now embracing the power of pessimism, which has a good amount of research behind it. Pessimists, it’s been suggested, are more motivated to take action than positive thinkers, while those who face the worst-case scenario actually find consolation and freedom.

To that end, a friend has just sent me a list of demotivational quotes: ‘Everyone has a purpose in life. Perhaps yours is watching television,’ he tells me.

‘Today will be a day like every other day.’

That is my favourite. Maybe I should share it? Print it on a tea towel?