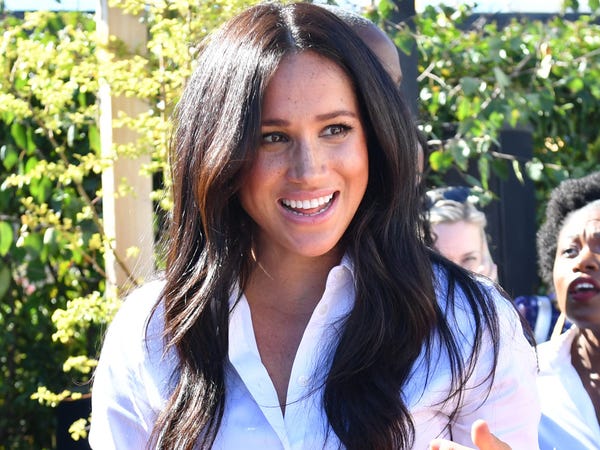 Meghan Markle wore a laid-back outfit with a special meaning.

For her first joint podcast appearance with Prince Harry, which aired on October 10, Markle paid tribute to the late Supreme Court Justice Ruth Bader Ginsburg in a light-blue T-shirt with the letters "R.B.G." written in turquoise across the front.

Markle also wore a $16 cloth face mask with the words "When there are nine" embroidered in the corner as another nod to Ginsburg, who said the now-famous phrase during a 2015 interview at Georgetown University.

"People ask me sometimes, 'When do you think it will be enough? When will there be enough women on the court?' And my answer is: 'When there are nine,'" Ginsburg said.

At the time of writing, the black face mask is available to purchase through the Etsy shop JustPoshStyle, which also sells T-shirts and hoodies featuring Ginsburg's iconic quote.

To complete her laid-back outfit, Markle also wore jeans, a striped sweater draped over her shoulders, and Manolo Blahnik heels. She accessorized with a Cartier Love bracelet, a $275 Monica Vinader Linear Chain Bracelet, and a watch.

To plant Princess Diana's favorite flowers at a preschool in Los Angeles in September, Markle wore a $60 chambray shirt from Anthropologie that was on sale for $60 before selling out. She paired it with dark-wash jeans and $145 Rothy's flats.

In August, Markle did a sit-down interview with Gloria Steinem to discuss the importance of voting and representation for the MAKERS. During the backyard chat, she wore a white T-shirt and $249 Anine Bing striped trousers with a $356 Janessa Leone Serena hat and Stella McCartney sandals that were on sale for $477 before selling out.

discuss representation, why each vote matters and how all women “are linked, not ranked." MAKERS has an exclusive look at that historic backyard chat! 🙌 Q&A to come tomorrow.