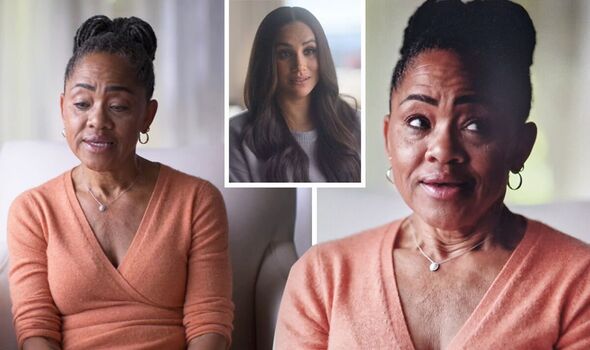 Meghan Markle’s mother, Doria Ragland appeared in the Netflix docuseries, Harry and Meghan. Body language expert Jesús Enrique Rosas, also known as The Body Language guy, analysed Doria’s appearance in a recent YouTube video. He explored whether Meghan was in the room when Doria was being interviewed, as well as noting Doria’s nervousness toward some questions, and how she showed signs of relaxing when discussing memories.

The first idea Jesús explored was whether Doria had her daughter in the room for her interview.

Jesús said: “I’m sure you noticed Doria was rehearsing her words in some way [at the very beginning].

“She looks upwards and begins vocalising some words, we can’t possibly know what she was saying at that moment – maybe she was humming or singing a song to pacify herself? That would mean she was a little bit nervous.

“The gesture I wanted to point out was when she looked to her left – which she doesn’t do at any other point, and she smiles. So maybe Meghan was right next to her?

“The only other two signals are a subtle lip pressure at the start and the look of being a bit concerned at the end,” he added.

Doria was asked by the interviewer: “Start off by introducing yourself to us.” She replied: “Sure. My name is Doria and I’m Meghan’s mom. And um, the last five years have been challenging. Yeah.”

Jesús watched this clip and commented: “We begin to see the first signals of nervousness – remember we can’t jump to body language conclusions with just one or two signals, we have to stack them so we can have a more solid idea of what’s going on.

“In this case, she starts with her head towards the interviewer, that’s nice, she’s willing to be there. After, just answering ‘My name is Doria and…the last five years have been challenging, she pulls her head back. Her head is backward, it’s a bit resistance – it’s just one signal but maybe she is camera-shy?

“And the other thing is the rapid blinking when she says ‘the last five years have been challenging.’”

The next clip Jesús watches is when Doria says: “I’m ready to have my voice heard, that’s for sure. A little bit of my experience, you know, as her mom. Yeah.”

The body language expert suggests: “It’s worth noticing that these clips [of Doria] are heavily edited because the gesture and the posture are not the same where one ends and the other one begins. So we have to take that into account.

“This moment we have several signals of her being nervous; notice that she tries to fit herself in the seat, she has a couple of signal shoulder shrugs, her left should go up [and down].

“When she says ‘a little bit of my experience, you know, as her mom’ she looked to one side, the left in the same direction ‘as her mom’ referring to Meghan. It was highly likely Meghan was standing beside the camera and lighting.

“Another signal of her being nervous is when she repeats ‘you know, as her mom’. Well, we already know she’s her [Meghan’s] mom, it’s odd but could just be nervousness.

“These signals of nervousness, it’s important to take them into account, because if someone’s nervous, that’s a filter we have to use when we watch the following clips.”

Jesús moved on to the next question Doria was asked: “Do you remember when Meg told you she was dating Harry?”

He commented: “Notice upon the question, Doria has that attitude of defensiveness, her head and chin are backwards.

“This is a simple question and notices how she looks to her left, it’s way to her left, not like we’ve seen before.

“This is to her left, left, so her memory bank, so she’s actually remembering the moment when Meghan told her she was dating Harry.”

Doria told the interviewer: “I do. And when she told me, we were on the phone and she says…”

“Notice her eyes go fully to her left so she’s actually remembering the moment,” Jesús said.

“Upon recalling this event, then she relaxes, her neck, her head, lips and shoulders all relax.

“She does this subtle nodding – and this is something I’ve noticed in Doria, it’s part of her baseline, her common body language [signals].

Jesús noted: “It’s important to make the analysis in chronological order, you can assume at the start of the interview Doria would’ve been more nervous, and as the interview progressed she was more relaxed and talk at ease.”

Jesús, alongside a team of other experts conducts masterclasses in body language analysis for Knesix Insitute. Most recently he has spoken about different interview techniques to detect lies, 12 nonverbal communication examples and how to become aware of body language signals.