How to remove scuffs and scratches from your car using TWO common household items: ‘I didn’t think this would work’

A woman has discovered an easy way to get rid of scuff marks on cars using two basic household items – however many have pointed out it is not a permanent fix.

Sydney Hess, from the US, tested the hack of putting a combination of vinegar and coconut oil over scratches on her car’s clear coat to see if it would work in a now-viral video posted to TikTok.

The hospitality worker from Wisconsin was skeptical at first but after applying the concoction with a cloth she saw the scuff marks wipe away like magic. 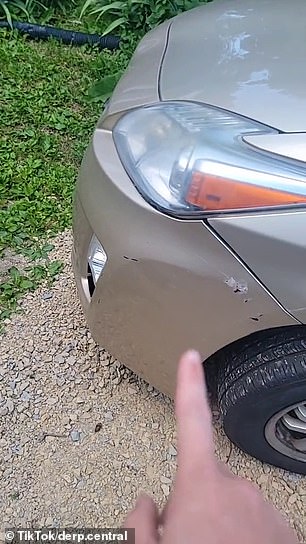 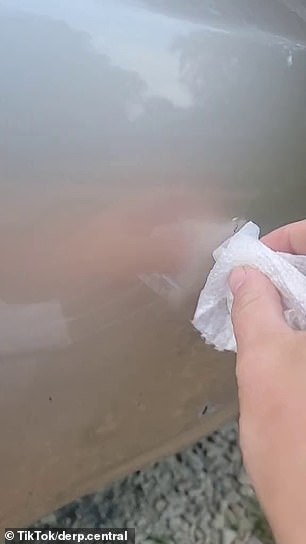 Sydney Hess, from the US, has gone viral on TikTok after sharing her simple trick for temporarily making car scuffs and scratches disappear with a mix of coconut oil and vinegar

‘I saw this thing on here saying if you mix white vinegar with coconut oil, you can take scratches out of your car and well my best friend hit me, she wasn’t paying attention but I got plenty of scratches to try this one,’ she said in the clip.

As Sydney wiped the mix over the scratches she admitted she ‘didn’t think it was actually going to do anything’  but was surprised to see the shallow scratches in the clear coat disappear.

I really didn’t think this would work

How to fix a shallow car scratch

To fix a shallow scratch or a light swirl, you’ll need two clean microfibre towels and a scratch remover product, which you can find in automotive shops and some supermarkets.

Scratch remover products cleanse and polish light marks, blending them seamlessly into the rest of the topcoat.

To buff out light scratches, simply:

1. Wash and dry your car thoroughly

2. Apply a small amount of scratch remover product to the microfibre towel

3. Spread the product over the mark, plus a 60cm radius around the mark

4. Rub with moderate pressure and overlapping circular motions for about 60 seconds

5. Allow the product to dry to a haze

7. Repeat until the mark is buffed away.

Make sure you do this in the shade, when the panel is cool and has been washed prior to polishing, as dirt will cause more scratches.

Sydney then put the hack to the ultimate test by cleaning the area with rubbing alcohol to see if the scuffs and scratches would reappear and was shocked to see they didn’t.

Her video racked up more than 10.2million views and thousands of comments from impressed viewers whereas other pointed out rain or sunlight would see the marks visible again.

‘It’s like putting lotion on dry skin,’ one person joked while another said: ‘If it survives direct sunlight I’d call it a win’.

‘Auto painter here. This isn’t removing the scratches. Its just filling them with oil. The ones that aren’t deep look like they will be gone. Until rain,’ a third pointed out.

‘It’s only because it’s hitting a cold surface and solidifying, wait till it gets hot, it will melt,’ replied a fourth.

‘When it dries it will still be there. The clear coat needs to be buffed and polished to get small, shallow scratches out,’ another suggested.

Others were sharing their quick-fix solution to scratches on a car’s clear coat including baking soda on a damp rag and whitening toothpaste.

‘If you got someone else’s paint on yours nail polish remover works the exact same for paint and scratches,’ one person explained.